The opposition parties' boycotting Knesset debates this week on three controversial bills is a failure for Israel's democratic process. 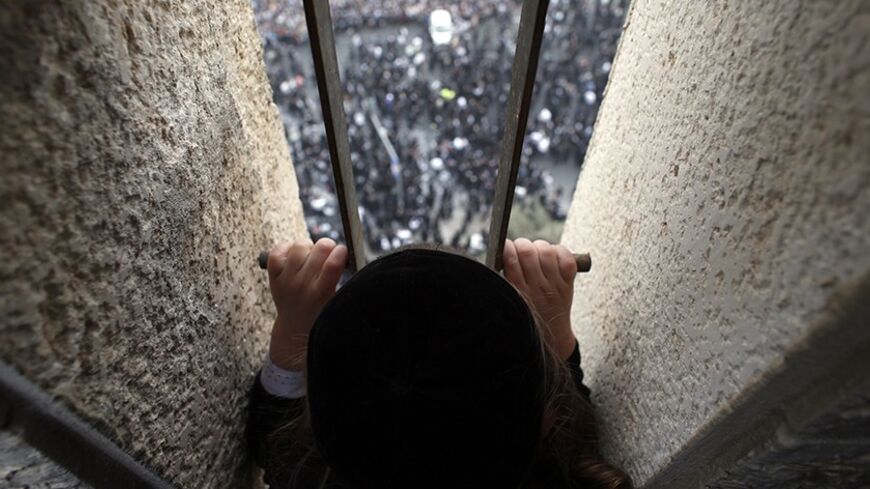 An ultra-Orthodox Jewish boy looks down from a balcony in Jerusalem at a protest against a sharing the burden bill, March 2, 2014. - REUTERS/Darren Whiteside

The packaging of three controversial Israeli laws — the governability, sharing the burden and referendum laws — in a single coalition bundle caused a tempest in the political and media swamps. The opposition parties boycotted debates and votes on those laws, claiming that bundling them together was an assault against the principles of democracy. Members of the coalition responded that the boycott brought disgrace on the legislature, which was the sanctuary of democracy. Both sides were right. This parliamentary event will hardly go down in the golden book of Israeli democracy. However, it is just a symptom of a more serious disease that has affected the spine of Israeli society and its institutions over the past few years, or to be more precise, Israel’s Jewish society.

Not a day goes by without us hearing the prime minister calling on the Palestinians to recognize Israel as a Jewish state. But is it possible to recognize Israel as a democratic state, as a state that makes every effort to treat all of its citizens as equals, regardless of religion, race, nationality or gender? Just last week on March 6, Amir Levi, who is in charge of budgets at the Finance Ministry, admitted that there are significant gaps in the allocation of budgets to the Arab sector for education, the construction of daycare centers, public transportation lines and all matters pertaining to sources of business income for the Arab localities — compared to Jewish localities. Levi told this to the ministers of finance and science during a rare ministerial visit to the Arab town of Sakhnin in the Galilee. The most senior official in the Finance Ministry's budget department recommended a “root canal” to deal with the disease of discrimination facing non-Jewish localities, or in Levi’s more euphemistic terms, “unequal budgets.”

The Israeli Democracy Index for 2013, published by the Israel Democracy Institute, reveals that 48.9% of the Jewish interviewees believe that the country’s Jewish citizens are deserving of more rights than its non-Jewish citizens, and 43.7% disagree. The situation was completely different just five years ago. The number of respondents who agreed that Jews should receive more rights was 35.9% then, whereas the number who disagreed was 62%. This finding, writes the author of the index, Tamar Hermann, “is extremely problematic in terms of democracy, since the essence of democracy is the principle of equal rights for all citizens and this principle is enshrined in Israel's declaration of independence.”

Furthermore, 51.5% of Jews “absolutely agree” with and “quite support” a policy by which the government would encourage only Jews to build new localities. According to 66.7% of interviewees, momentous decisions by the state on matters of peace and security should be made by a Jewish majority. Only 20.1% completely disagree with this approach. However, when it comes to non-political issues, it is worth noting a change in the general public regarding “non-Jewish citizens of the state.” Last year, foreign workers replaced Arabs at the top of the ''undesirable neighbors'' chart, with 47.6% of Jews saying they would feel uncomfortable having an Arab family as its neighbor and 56.9% saying they would feel uncomfortable having foreign workers as neighbors. (Arab respondents were deterred first by gay neighbors, then Jews and finally foreign workers.)

Even in terms of freedom of expression, the heart and soul of democracy, the Jewish society of Israel is hardly a source of pride. The index shows that 54.2% of the public completely agrees or mostly agrees that speakers should be barred from publicly expressing harsh criticism of the state. Every second Israeli Jew believes that human rights organizations like the Association for Civil Liberties and B’Tselem cause harm to the state. These findings correspond with the preference of 32.3% of the Jewish respondents, who would rather see Israel defined as a Jewish than democratic state. Some 37% say that both values are equally valid, and only 29.2% ranked democracy before the Jewish character of the state. The finding that stuck out most throughout the entire survey was that the younger generation of Jews (ages 18-24) has a tendency to express nationalistic positions more than the elder respondent groups.

The researchers believe that beyond the demographic aspect (the natural rate of increase among religious and ultra-Orthodox Jews, who tend to support right-wing positions, is higher than the rest of the population), young Jews identify significantly more as “Jewish patriots” and want a state that is more Jewish. At the same time, the survey reveals that they are less committed to democratic values than the generations of their parents or grandparents. This trend is also expressed in the Index of National and Linguistic Tensions as it appears in the International Country Risk Guide. The tolerance index ranks 27 countries according to their level of democracy. These estimations are based on a combination of data from both primary and secondary sources, as well as reviews by experts in different countries. According to this index, Israel ranks last, alongside Turkey, with both countries scoring 2 out of 6. On the chart showing internal religious tensions, Israel shares last place (2.5 points) with Egypt, Lebanon and India.

In the other indices, including political involvement, participation in the election process, gender equality, economic freedom and freedom of the press, Israel has been ranked in the middle of the charts for the past few years. The overseers of the state could take comfort in the assessment of the Freedom House research institute, which found that 2013 was the eighth consecutive year in which there has been a decline in the Index of Global Freedom. However, while it is possible to point to the cup being half-full in all matters pertaining to the state of freedom within the sovereign territory of the State of Israel, a regime of discrimination and segregation rules the territories occupied by Israel. Two populations, Israeli and Palestinian, live under the same government but are subject to two completely different legal and infrastructure systems, and this has implications on all aspects of life. A 2013 report by the Association for Civil Rights notes that over the past few years, Israel has been particularly oppressive to Palestinians living in Area C, depriving them of basic services such as water, sanitation and electrical infrastructure.

Many members of the opposition who boycotted the Knesset debates over the bundle of new laws have lent a hand to a policy of discrimination against minorities, religious coercion and the denial of freedom and civil rights to another people, while serving in past governments. Their decision to abandon the Knesset chamber will heal the ailing democracy just like a regime of aspirin will restore a cancer patient to health.