Israeli killing of judge at border provokes backlash in Jordan

The killing of a Jordanian judge by an Israeli soldier comes only two weeks after Amnesty International released a study describing Israeli troops as "trigger happy." 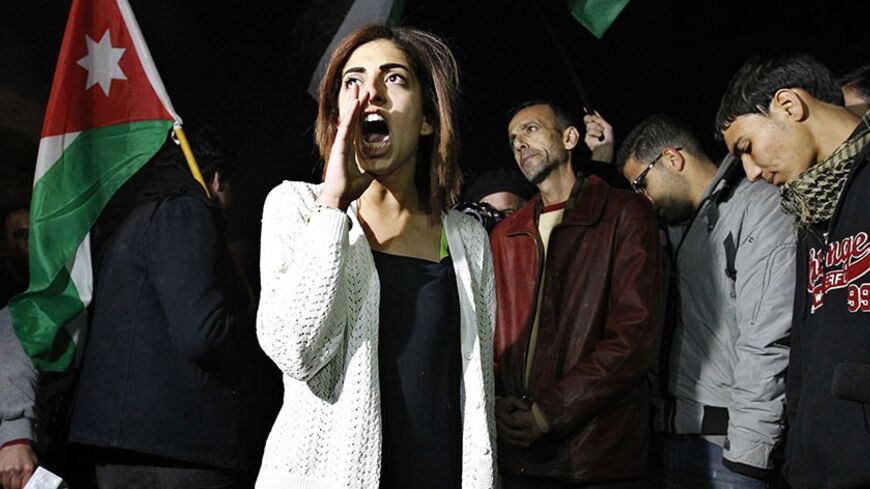 Protesters in Amman demonstrate against the shooting of a Palestinian judge from Jordan by Israeli soldiers, March 10, 2014. - REUTERS/Muhammad Hamed

The killing of Raed Zuaiter, a Palestinian-Jordanian judge, at the entry to the Israeli-controlled side of the King Hussein Bridge on March 10 has resulted in an explosion of anger in the Hashemite kingdom. Protests and marches took place late that night near the Israeli Embassy in Amman. The following day, a vigil at Amman’s Justice Palace saw thousands of lawyers and judges unite in denouncing the killing. Students also protested at various universities, but perhaps the strongest voices were raised at the March 11 afternoon session of the Jordanian parliament, where legislators demanded in unison that the government expel the Israeli ambassador and recall Jordan’s envoy to Tel Aviv. Many even went so far as to call for scrapping the Israeli-Jordanian peace agreement. Others sought clemency for Ahmad Daqamseh, the Jordanian soldier who killed seven Israeli girls on the Jordan's side of the northern crossing point in March 1997 and has served more than half of his 25-year sentence.

The killing took place just two weeks after Amnesty International produced a report detailing how "trigger-happy" Israeli soldiers often abuse their firepower. The shooting of Judge Zuaiter very much fits the profile of the way well-armed Israeli soldiers conduct themselves, likely due to the impunity provided by the Israeli establishment. The study found that in most cases, Israeli soldiers are not held accountable for premeditated killings. Amnesty judged these premeditated wanton killings — in which the soldiers’ lives are not in danger — to be war crimes.

Prime Minister Abdullah Ensour did his best to soothe the Jordanian parliamentarians' anger and provided what he said was proof that the government had pushed for and won Israeli concessions. Ensour said that Israel had agreed to a request that the investigation of Zuaiter's death on the bridge be carried out jointly by Israel and Jordan. He also stated twice that Israel had apologized to Jordan for killing the unarmed bus passenger.

An apology translates as an acceptance of guilt, whereas official Israeli announcements and media reports say only that Israel has expressed “regret” leaving it unclear what exactly transpired between the two sides. Official Israeli statements assert that soldiers shot the judge in self-defense and claim that Zuaiter had attempted to seize a soldier’s gun. Another report states that the judge ran toward a soldier in an attempt to strangle him.

These inconsistent reports have been countered by eyewitnesses who say that Zuaiter was punched by a soldier, as he was slow in returning to the bus after the initial check of passenger IDs. Maan News quotes eyewitnesses as saying that after Zuaiter was punched and fell to the ground, he attempted to get up to defend himself, but was shot in the foot, followed by a second shot that missed him, before a second soldier fired three shots to his chest.

Israel claims that the cameras at the crossing point were not working that day. This assertion seems far-fetched, as vehicles entering and leaving the area are allowed passage only after a barrier is raised, and this is done from a windowless room where the Israelis monitor all movement via cameras. It would have been impossible for the bus to have been allowed passage without an Israeli approving its entry after seeing its approach via a functioning camera.

The shooting at the bridge is a rare event. Passengers are screened on the Jordanian side before embarking on buses to travel to the Israeli-controlled side. While passengers have regularly expressed anger at the harsh way in which Israeli soldiers treat arriving passengers, for the most part Palestinians are usually reserved and unwilling to challenge the Israelis' superior firepower. It appears that Zuaiter was not as willing to suffer humiliation, and according to the Jordanian prime minister, was killed after an altercation with an Israeli soldier despite being unarmed.

The joint Jordanian-Israeli investigation to which Israel has agreed has the unique opportunity to produce a clear account of what exactly happened and whether the killing was avoidable. If the joint investigation reveals a violation of internationally accepted rules of engagement — the Israeli rules of engagement are not publicly known — it will be interesting to see if the killers are charged in an Israeli court, and if found guilty, what their punishments will be. If no soldier is held accountable or given a reasonably long prison sentence, the pressure on the Jordanian government to release one of their own soldiers, that is, Daqamseh, will intensify.

The presence of heavily armed, trigger-happy Israeli soldiers at the King Hussein Bridge needs to be revisited. One suggestion for removing friction between Israeli soldiers and unarmed Palestinian passengers is to implement the 2003 road map, which calls for a return to the pre-October 2000 situation. Before that date, uniformed but unarmed Palestinian police had been stationed at the bridge to handle passengers, with Israeli security personnel shielded behind tinted, one-way mirrors. Also, keeping the bridge open around the clock could possibly reduce the pressures and tensions that exacerbate difficulties at the crossing. Currently, the bridge is open from 8 a.m. until 11 p.m., Sunday through Thursday. On Fridays and Saturdays, the bridge is open only from 8 a.m. until noon.

King Abdullah II is under unprecedented public pressure to produce some sort of results. The peace process is at a sensitive point, and the relative quiet could easily be replaced by a major outbreak of violence. Uprisings are usually unpredictable, but the killing of the judge, coupled with the deaths of five other Palestinians in Gaza and the West Bank within two days, could easily trigger a new round of protests and violence.

The third intifada could be around the corner if the peace process fails and the violence continues.