A recent Jordanian delegation to Beirut raised concerns about the erosion of Jordanian identity. 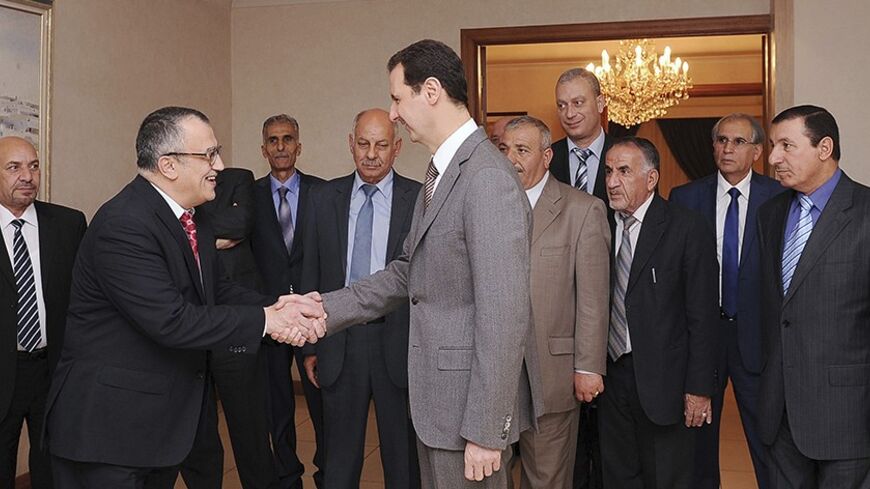 A delegation from the Jordanian Council on Foreign Relations visited Lebanon from March 9-11. The delegation, comprising representatives of a number of leftist, secular and nationalist parties in Jordan, visited Lebanese officials, before heading to Damascus where they met with Syrian President Bashar al-Assad. The delegation then returned to Beirut to voice its concerns and raise the alarm: Jordan, as an independent state, is facing an imminent risk. The displacement of Palestinians from the occupied Palestinian territories has indeed begun and is auguring an impending change in the region’s map. What information and facts have led them to raise the alarm?

Al-Monitor met with the members of the Jordanian delegation, among whom were representatives of political parties, former members of parliament, retired officers, academics and unionists. According to them, Jordanian identity may be threatened by a "Jordan option" that may already be in process. The country’s population is 6.5 million people. According to official figures, while the inhabitants are Jordanians, 43% of them are of Palestinian origin. This phenomenon is the result of the historical intertwining between the Emirate of Transjordan and neighboring historical Palestine. Since this first started, half of the population of Palestine developed a different identity and national cause as the result of the loss of their territories and homeland. Yet, they practically became citizens of the Jordanian state.

After the establishment of the Jordanian state, and notably after the Arab-Israeli wars that took place from 1948 to 1967, the displacement of Palestinians in Jordan continued, until Jordan was hosting around half a million Palestinians who are not included in the statistic of 43%, as mentioned above. This means they were not official Jordanian citizens and were placed in camps built on Jordanian territory. The process of demographic change in Jordan did not end at this level, as noted by the members of the delegation. With the Iraqi war and the US-led invasion of Baghdad, around half a million displaced Iraqis moved to Jordan. There is no accurate data on the numbers of those who returned to Iraq and those who settled in Amman. Finally, the Syrian war erupted, and around 700,000 Syrians were compelled to move from the north to Jordan, which aggravated the problem and the frail demographical structure of this country.

However, during its visit to Beirut and Damascus, the delegation did not want to tackle the issue of hosting displaced persons from neighboring countries. Instead, members of the delegation discussed the implementation of US Secretary of State John Kerry’s plan regarding a settlement between Israel and the Palestinians, in accordance with the conditions imposed by Israeli Prime Minister Benjamin Netanyahu. They noted that all information and facts indicate that the process of transforming Jordan into an alternative homeland for Palestinians has started. They believe that the principle of Israel as a Jewish state is now being carried out at the expense of Jordan as a state. The members of the delegation affirmed that Jordanian official statistics showed that a regular displacement from the occupied Palestinian territories to Jordan has been registered over the past few years, at a rate of 70,000 displaced Palestinian per year, due to economic hardships and the attempts of Palestinians to find jobs and make a living. According to the members of the delegation, there is a far worse and more dangerous scenario, which is the systematic and clandestine Israeli-Jordanian plan to move all Arab citizens of Israel — who number 1.4 million Palestinians — into Jordan in the coming years.

In this context, the representatives of the Jordanian parties revealed what they deemed dangerous indications of the implementation of this plan. The first indication is the new measure ratified by the Jordanian government a week ago, allowing those who live in Jordan and do not have the Jordanian nationality to be granted temporary passports for five years. According to the delegation, this measure underlines a silent and gradual process of nationalizing and settling Palestinians in Jordan. The second indication is adopting new measures facilitating the process of Jordanian women married to non-Jordanians granting the Jordanian nationality to their children knowing that this measure, which has a humanitarian aspect, means granting nationality to a large number of Palestinians. The third indication is the talks about passing new laws for municipal and parliamentary elections, which are observing the possibility of granting non-Jordanian residents and those who have temporary passports certain electoral rights. This means that they would have new civil and political rights, which would eventually turn them into official citizens.

Drawing on these indications, in addition to the demographic situation in Jordan, the members of the delegation believe that there is an implicit decision to change the identity of Jordan, transforming the country into an alternative homeland for Palestinians. According to them, this is taking place within the unannounced consent of the Palestinian Authority (PA) in Ramallah as well as the Jordanian government. The political logic, however, suggests that both parties should oppose such a step, because its implementation would only lead to the collapse of the government in Amman and the PA in Ramallah.

The members of the delegation evoked the last Jordanian-Palestinian war, which took place between fedayeen (guerrillas) of the PLO and the Jordanian army in 1970, during which Yasser Arafat lost and King Hussein walked out victorious. It seems that 44 years after this battle, someone is silently and nonviolently taking revenge on the late Jordanian king, amid the silence of the heirs of both Hussein and Arafat. What is more important are the repercussions this late “revenge” will have on the neighboring countries, namely Lebanon, Syria and even Palestine.