The illusion of complacency in Israeli-Palestinian peace talks

The only one who seems in a hurry is US Secretary of State John Kerry. 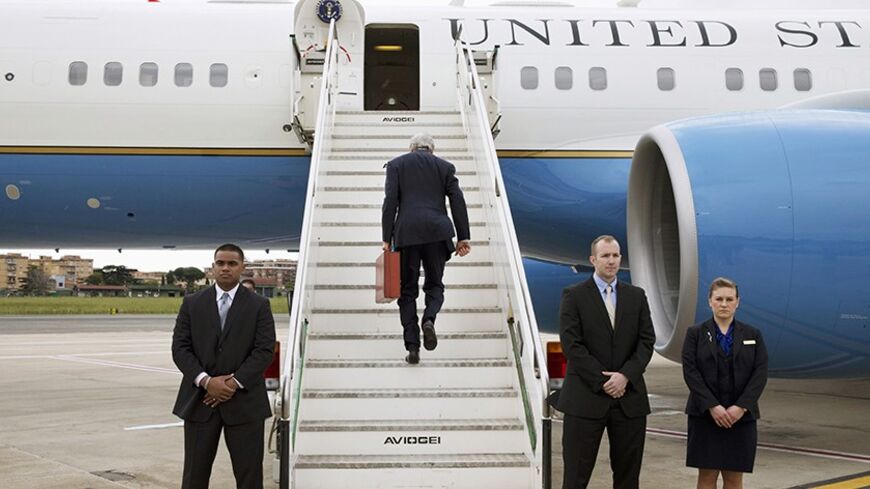 The peripatetic US Secretary of State John Kerry is at it again. Kerry will be traveling to see PLO Chairman Mahmoud Abbas in Amman today, March 26, and will talk with Israel’s Prime Minister Benjamin Netanyahu via video link soon thereafter. The issues — finessing a couple of self-imposed deadlines — are for Israel to release Palestinian prisoners by month’s end and for negotiations to continue past the end of April, both set when discussions commenced in July.

Notwithstanding Kerry’s famously frenetic pace, negotiations between Israel and the PLO, which will celebrate their 21st anniversary in September, have never been marked by hard and fast deadlines. Yitzhak Rabin, the Israeli architect of this process, famously insisted that “there are no sacred dates” — and the process since then has followed his instruction.

As Norway’s ambassador to Israel, Svein Sevje, noted in a September 2013 interview with Al-Monitor, " … [W]hen Rabin said that there were 'no sacred dates' regarding the implementation of Oslo … this took a lot of the pressure off the process, and eventually gave time for the spoilers on both sides who aimed at damaging the process."

For more than two decades, deadlines have come and gone, and yet the wheel keeps turning — witness Kerry’s latest push. It’s never too late, the clock seems to be stuck somewhere short of midnight. No big decisions have been made, and despite the current American push for progress, none are expected.

This record of continuity may contrast with the sense of impending crisis now enveloping Kerry’s effort. But on the ground itself a certain sense of complacency is the defining characteristic in both Israeli and Palestinian camps. There is little evidence that the Netanyahu government or the Palestinian Authority is considering, or indeed has set the stage, for material changes in the status quo. The everyday actions of both Israelis and Palestinians — officials and citizens alike — make it difficult to conclude that the time for momentous decisions has arrived.

Sevje, a veteran Norwegian diplomat who is intimately familiar with regional events over the last decades, observed, “If you mean that many Israelis seem to be complacent about the future of Israel, the thought has occurred to me, yes. Twenty years after that, 40 years after the Yom Kippur war and almost 50 years since the occupation started, sometimes I, a foreigner and a non-Jew, feel I am more worried about the future of Israel than Israelis are."

Israel’s biggest public event in recent memory was far removed from past rallies for peace held in Tel Aviv’s Rabin Square. The Jerusalem Post reported that a March 2 rally to protest a government effort to end the exemption of ultra-Orthodox Jews from compulsory military service brought hundreds of thousands to Jerusalem, virtually closing off the nation's capital in the early afternoon hours. Around 300,000 protesters, according to unofficial estimates, gathered near the Chords Bridge at the main entrance to Jerusalem.

Most other Israelis are more concerned about the ever-rising cost of housing. Politicians of all stripes live in greater fear of public retribution for failing to supply cheaper apartments than for failing to bring peace. Not far behind are the continuing difficulties — often of a sexual nature — of this minister or another. They make for interesting television gossip but are far removed from the agenda that Kerry is trying to impose.

For Israelis, the bloody second intifada and the all-consuming sense of personal insecurity that it produced have passed into history. The security checkpoint at the upscale Herzliya marina and most other locations throughout the country have been dismantled. And those that haven’t are manned by indifferent pensioners.

Channel 2 recently screened a three-part series highlighting continuing settler depredations against Palestinians. These “price tag” operations are now often filmed in real time by ubiquitous security cameras. The lukewarm responses of Israel’s criminal justice system are presented as feature stories well into the broadcast, rather than news of immediate import at the top of the hour.

In the West Bank itself, the Israel Defense Forces (IDF) are deploying fewer troops than at any time in the last quarter century. Recent military operations in the Jenin refugee camp, and that 27 Palestinians were killed in 2013 by Israeli forces in the West Bank, do not belie this fact. Nor do they excite any extraordinary Israeli interest. These events are like wallpaper — unremarkable and not very noteworthy. The IDF terms these commonplace, continuing efforts to crush Palestinian opposition to occupation as “mowing the grass.”

Among Palestinians, their long history of steadfast opposition to occupation remains a constant. But today, it is practiced without any sense that their efforts will be answered by a withdrawal of Israeli forces or the settlers whose appetite for land cannot be sated. Abbas’ current efforts in this regard barely earn public notice. The current generation of Palestinians, unlike their fathers and mothers, have no Arab heroes to emulate or to provide inspiration. Gamal Abdel Nasser and Yasser Arafat were young men when their parents rallied in Birzeit and Hebron, the idea of ending Israeli occupation and creating a Palestinian state still fresh and untested. What teenager today will hoist a picture of the octogenarian PLO leader Abbas as the savior of Palestine?

In May 2009, American Lt. Gen. Keith Dayton, responsible for helping reform the post-intifada Palestinian security forces, warned an American audience that it was unrealistic to expect those forces to implement an Israeli-defined security agenda in the absence of what he called a “political horizon.” Soon thereafter, a senior Palestinian security official told me, “If there is no breakthrough in two years, it is not only the security issue that will be in bad shape. Everything else will collapse. At 47, I am not into resistance, but I cannot say the same for my son.”

We are now five years past Dayton’s sell-by date, and a genuine political horizon for liberation seems as distant as ever. A good measure of personal security has returned to the streets of Nablus and Jenin, even as refugee camps at Balata and Jenin become all but no-go areas for the Palestinian Authority security and police forces, as Al-Monitor’s Shlomi Eldar reports.

Yet, Palestinian security professionals do not exhibit undue alarm at this development or their broader predicament, and they are far from warning about the imminent implosion of the security system if the status quo remains untouched by Washington’s diplomacy.

Nevertheless, Israeli security professionals describe the “controlled rage” of a Palestinian population forced to play by occupation’s unequal rules. Such explosive sentiments are evident in the lamentations of a villager from Khusra forced to defend his land against marauding Israeli settlers because his own security forces are prohibited from coming to his aid, and in the weekly, ritualistic demonstrations against the separation barrier in Bil’in and elsewhere. An ill-timed challenge at Jerusalem’s Haram al-Sharif, or a confrontation at Hebron’s Tomb of the Patriarchs, or even something as pedestrian as a car accident at a checkpoint, retains the power to break all the rules, no matter what the state of American diplomatic efforts.