Of 14 women, only one Arab will be among those participating in the traditional torch-lighting ceremony. 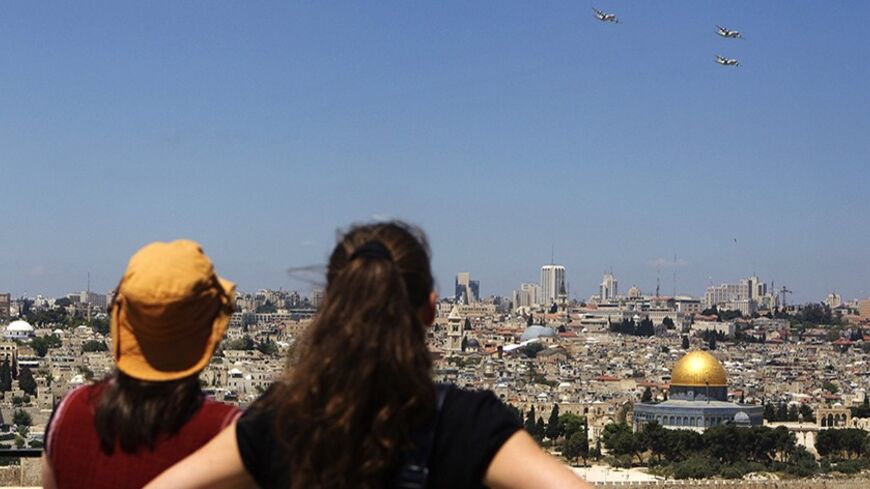 The ceremony marking Israel’s 66th Independence Day this year will be dedicated to the “Era of Women.” For the first time, all the people participating in the traditional torch-lighting ceremony will be women.

The ceremony, which takes place on Mount Herzl, beside the tomb of the visionary of the State of Israel Theodor Herzl, concludes the events of Remembrance Day for the Fallen Soldiers of Israel and Victims of Terrorism, and opens the Independence Day celebrations. Over the years, the ceremony has become the major event marking Independence Day Eve and is broadcast live on all the major television and radio stations.

The highlight of the ceremony is the lighting of 12 torches, “for the glory of the State of Israel.” The people who light the torches are selected by a public committee, based on the theme that was chosen for the ceremony in that particular year, to offer a faithful representation of the complexity of Israeli society in all its many layers. There are long-time Israelis and new immigrants, Jews and minorities, secular and religious, men and women, people in uniform and civilians, young and old.

The selection of every one of the people who light the torches is also an expression of recognition and admiration for their contributions to their communities, to society, to education, thought, culture, science, sports and acts of heroism and sacrifice ensuring the security of the State of Israel. Sometimes the families of the fallen are selected to light a torch after having lost more than one family member to the wars or terrorism.

This year, the committee that selected the women to light the torches was headed by the Acting Director of the Center for Public Diplomacy Yitzhak Sonnenschein. He was joined by eight members, including Meir Bardugo, chief of staff for the minister of education and dport; Tal Galor, who represents the Prime Minister’s Office; former Cabinet Secretary Tzvi Hauser; the head of the Knesset’s Department of Ceremonies and Events Miri Yachin; and Director of the Authority to Advance the Status of Women Vered Sweid.

Rounding out the committee were several independent representatives of the public. These included Meir Buzaglo, a lecturer in philosophy at The Hebrew University, who himself lit a torch last year; Yaakov Amsalem, a founder of the Dona Gracia Association (the Center for Sephardic Women Leadership); and journalist Emily Amrousi.

On March 18, the committee released the names of the 14 women who will light the 12 torches. The list received the blessing of Minister Limor Livnat, who heads the Government Committee for Ceremonies and Symbols. “This is a diverse list that represents the unique mosaic that is Israeli society and that inspires the empowerment of women,” said the minister.

And in fact, each of the women was chosen to light an Independence Day torch because of her achievements. The list begins with veteran theater actress Miriam Zohar and continues with the founder of an ultra-Orthodox college and daughter of the late chief Rabbi Ovadia Yosef, Adina Bar Shalom, and head of the Isral Defense Forces’ Manpower Directorate Maj. Gen. Orna Barbivai. It even includes the chairwoman of the National Student and Youth Council, Gal Yosef, a Grade 11 student from Petah Tikva who led the student protest against the teachers’ sanctions.

Among the 14 women who are supposed to represent what Livnat called the diverse mosaic that is Israeli society is just a single Arab woman, Hindiya Suliman from the Bedouin village of Bu'eine Nujeidat. That means one Arab woman and 13 other women, all of them Jewish.

Suliman married at the age of 16 and was later widowed, forcing her to raise her four children on her own. Three of her sons served in the IDF, and her daughter volunteered for national civil service. After her children had grown up, she decided to establish a small business in her village, manufacturing traditional crafts for sale to tourists. “Hindiya assembled a group of women in her village who support themselves from their work, while taking pride in preserving their artistic tradition, thereby advancing the status of women in her village,” wrote the members of the committee to explain why they chose her.

I have covered the torch-lighting ceremony on Mount Herzl on behalf of various Israeli television channels for almost two decades. The first Independence Day ceremony I covered was in 1994, on the same day that a suicide bomber from Hamas blew himself up on a bus leaving the northern town of Hadera's bus station, killing five and wounding dozens more. The ceremony took place almost exactly as planned, with a focus on the environment. Standing on the podium to light the torches were, among others, Bedouin and Druze forest rangers and staff of the nature reserves, who all bowed their heads together to mark the bloodshed on Israel’s Independence Day.

One year later, in 1995, two girls, one Jewish and the other Arab, lit a torch together to mark the “Year of Peace Tourism.” Since then, the number of Israeli Arabs participating in these events has declined, but this year the absence of Arab women who have shattered the glass ceiling in Arab and Israeli society screams out for attention. Especially when taking into account that so many Israeli Arab women activists have succeeded in bringing their struggle to the attention of the public, to rupture long established norms, and to overcome traditions that are thousands of years old. These are Muslim women in what is clearly a male-dominated society, who have waged a courageous struggle to improve the status of women.

There are women who fought valiantly against the phenomena of murder (honor killing) and violence in the family, and there are Bedouin women who pursued academic studies in university, despite the opposition of the men in their families. The presence of Bedouin women in the various faculties of Ben-Gurion University of the Negev, and especially in the departments of education and social work, is unprecedented. They make up more than one-quarter of all the female students.

According to data published by the Central Bureau of Statistics on the eve of last year’s Independence Day, more than 20% of Israeli citizens (1.682 million people) are Arabs, while 348,000 (4.2%) belong to another minority group (such as non-Arab Christians).

Given these statistics, it is hard to understand that a public committee, which is trying to create a fabric of people representing all sectors of Israeli society, could not find one other Arab woman, who is also a trailblazer, to stand on Mount Herzl this Independence Day eve alongside Hindiya Suliman.

Most of the members of the committee that selects the people lighting the torches are political appointments. There is not a single Israeli Arab member of the committee, or a Druze member, or a Bedouin, or a Christian or a Circassian, for that matter. Does this fact explain the absence of other Arab women from the list of honorees lighting torches this year?

Did any of the current members of the committee approach or even raise the name of poet Nidaa Khoury, a lecturer at Ben-Gurion University of the Negev, who was forced to rebel against her entire world just to write poetry? Or what about Su’ad Shehadeh, the mother of five daughters, who serves as director of the Social Community Center in the Wadi Nisnas neighborhood of Haifa and is a founder of Haifa’s Arab Women’s Lobby?

Could they not find a single Arab theater actress to light a torch with actress Miriam Zohar? What about Vida Mashour, editor-in-chief of Al-Sinara newspaper, who took it upon herself to edit the newspaper founded by her husband Lufty Mashour after he died of a serious illness, and who managed to transform the paper into a leading publication, helping to shape public opinion among Israeli Arabs. Is she not fit to light a torch alongside the highly esteemed veteran journalist Carmella Menashe?

And there is Vida’s daughter, Yara Mashour, who used the paper to launch the Arab Beauty Queen pageant and encouraged Israeli Arab women to fight for their status in a traditionally male-dominated society. She would have been a fitting candidate.

And how is it that this year there wasn’t a single Druze woman, even though the community lost many of its children in Israel’s war? Has any member of the committee visited the Druze villages recently? Have they been to Beit Jann, Horfish or Isfiya to get a closer view of an entire community that tossed its lot in with the State of Israel, and whose sons enlist en masse for military service in the IDF?

Hindiya Suliman is certainly a trailblazer in her village, but in a year in which Israel is marking its independence by celebrating the achievements of women, other Arab women should stand beside her on the podium at the torch-lighting ceremony. They could represent more than just their achievements in advancing the status of women in Israel. They could represent cooperation and coexistence between Arab and Jewish women in Israel in 2014.

When I called Hindiya Suliman this week, she was very excited. “Never in my life did I think that I would be lighting a torch,” she said. “I was recommended by Ella Youngman, a Jewish friend who lives in the Abirim locality, but even she didn’t believe that I would actually light a torch. There were so many candidates. I don’t think that I represent just the Arab women of Israel. I think of all the women in the world who take action on behalf of themselves, on behalf of peace, and on behalf of love.”