Arab Israeli TV host Lucy Aharish will light Israel's Independence Day beacon, a move some see as honoring the spirit of Israel's founding but others consider a fiction or an affront. 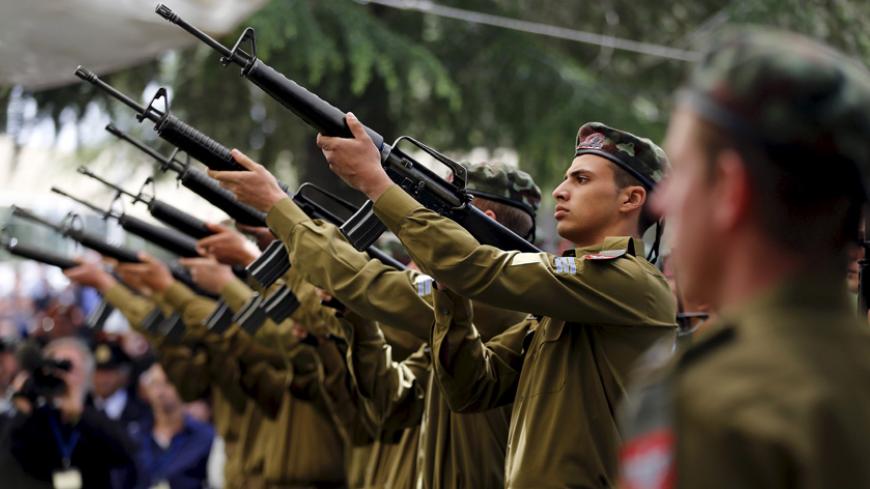 "His Majesty's Government view with favor the establishment in Palestine of a national home for the Jewish people, and will use their best endeavors to facilitate the achievement of the object, it being clearly understood that nothing shall be done which may prejudice the civil and religious rights of existing non-Jewish communities in Palestine. ” — Balfour Declaration, November 1917

“We appeal — in the very midst of the onslaught launched against us now for months — to the Arab inhabitants of the State of Israel to preserve peace and participate in the upbuilding of the State on the basis of full and equal citizenship and due representation in all its provisional and permanent institutions.” — Israeli Declaration of Independence, May 1948

The Arab Israeli journalist Lucy Aharish was honored this year with lighting a torch at the ceremony marking the end of Israel’s Memorial Day for fallen soldiers of the Israel Defense Forces (IDF) and the start of celebrations of the state’s 67th Independence Day on April 22. If you will, inviting an Arab woman to the center stage on Mount Herzl — Israel's national cemetery, named for the visionary of the Jewish state — symbolizes the spirit of the Balfour Declaration in recognizing the civil rights of non-Jewish groups in Israel. The consent of the brilliant young woman, who boldly displays her Arab identity, to participate in a ceremony of a clearly Zionist character symbolizes the realization of the Declaration of Independence in the full and equal citizenship of the Arab people.

The choice of an Arab woman to light a torch incenses those Jews who do not believe in equal rights and fostering good relations with the Arab minority. The right-wing organization Lehava (Prevention of Assimilation in the Holy Land) announced that it would hold a demonstration in Jerusalem to protest the invitation to a woman for whom “the flag with the Star of David is not her flag, the IDF is not her army, and her soul does not yearn for the hope of 2,000 years.” The word “hope” in Hebrew is “hatikvah,” which is also the title of Israel's national anthem.

Hasan Agbaria, principal of the Arab-Jewish bilingual school Bridge over the Wadi in Wadi Ara, has little enthusiasm for the invitation to Aharish to light a torch and to declare, according to tradition, the “glory of the State of Israel.” In a conversation with Al-Monitor, Agbaria wondered, “What glory will she declare?” Answering his own question with more questions, he said, “The glory of a state whose prime minister warns of Arabs arriving in droves to the polls on buses? A prime minister who doesn’t want me to participate in the decision of who rules over me?”

Agbaria says that it's his commitment to Israeli citizenship that would not allow him to take part in the gesture of torch lighting, which he calls a “fiction.” In his view, it is a gesture intended to mask a deep mistrust between the state and its Arab citizens. The state reminds him of this distrust every time he is subjected to a humiliating security check at Israeli airports because of his background.

A graduate of the Mandel School for Educational Leadership, he does not ignore the magnificent achievements of the State of Israel. “The State of Israel, established after the Holocaust, is one of the miracles of the 20th century,” Agbaria said. “Within several decades, a modern nation was established that accomplishes records in science, technology, medicine, arts and infrastructure. A few years ago, it took me 3½ hours to get from my village, Mazalfa, to Jerusalem. Now I get there in an hour and a quarter.” He added, however, “I enjoy only the crumbs of all this glory. They don’t let me be an indelible part of it. I can’t be proud of a flag with a Star of David, the symbol of the menorah or an anthem that refers to ‘the Jewish soul.’”

Agbaria is not one of the Israeli Arabs who dreams of turning Israel into an Arab state. In fact, deferral of the two-state solution makes him lose sleep. “If there will be an Arab majority here,” he asserts, “I’ll find myself another country. And it won’t be one of the Arab countries.” The agronomist who decided to work for education, equality and peace is also wary of alternative ceremonies that have sprung up in recent years in response to the deepening nationalism in Israeli society, such as the joint memorial ceremony for Israelis and Palestinians that the Combatants for Peace held on April 21 in Tel Aviv and the alternative torch-lighting ceremony instituted by the conscientious objector group Yesh Gvul.

“The entry visa for Israeliness is the army, fiery discourse and bereavement,” Agbaria said. “Bereavement is the VIP in the Israeli collective. Memorial has turned into a cult, but oppositionalism creates a sense of 'anti.' It’s the right of anyone to commune with the memory of his loved ones in any way he chooses. Why do we have to create competition with his memory? Why do you have to hold 'alternative' ceremonies precisely when the traditional ceremonies are held, in which many people find a small comfort for their pain? Is this what would strengthen my sense of belonging? At our school, we give space for the narratives of the two peoples. There are girls here whose grandfather was killed in the Lebanon War, and it would be criminal not to let them commune with his memory. There are children whose grandmother was expelled from Kerem Maharal. Should we not tell them her story?”

Agbaria makes sure that next to the “pain and mysticism” of the Jewish Israeli Memorial Day, space is created for Palestinian memory. He suggests that the state adopt the approach that he has used at the annual ceremonies held at Bridge over the Wadi. “Learning about the Nakba won’t bring one person back to life,” he noted, “but we must understand that the price of the wars isn’t only 40,000 dead, but also 570 destroyed Arab villages and 570 Jewish settlements established on their ruins. And no, it’s not important who started it.”

Although he does not expect to return to his family’s land, Agbaria's sense of belonging to the state is firmly attached to his land, to Mazalfa. He was born in this village and hopes that he can build a home there for his 16-year-old son. In light of the ethos of “redemption of the land,” however, which reduces the living area of the Arab minority, he expects that if he is lucky, the state will allow the younger Agbaria to build a home in Israel around Independence Day in 2030. Maybe by then there will be three Arabs, not just one, competing among themselves to be honored with lighting a torch for the glory of the State of Israel, in the spirit of the Balfour Declaration and the Declaration of Independence.