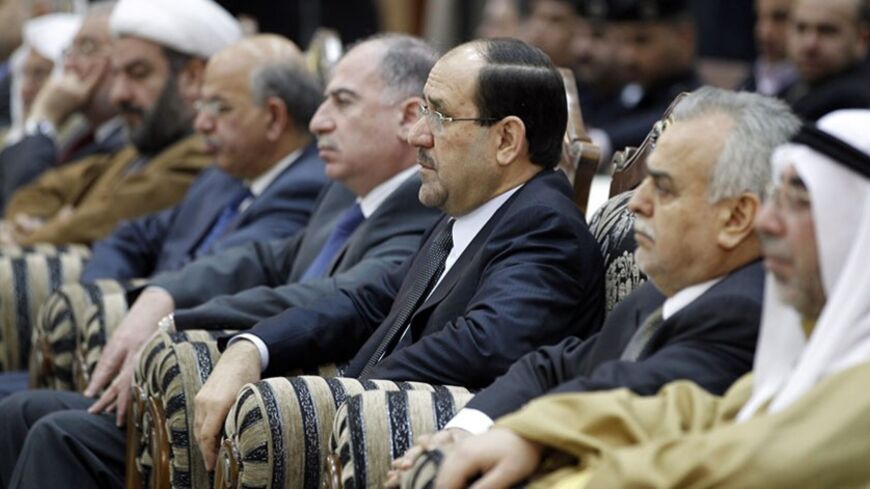 In a deeply divided country whose main parties rely on identity politics to renew their legitimacy, electoral seasons usually constitute an opportunity for ethnic and sectarian mobilization. Political parties and leaders, which present themselves as protectors of their “communities,” increasingly tend to adopt inflexible policies and exaggerate in their confrontational stances.

This is what is happening today in the confrontation between Prime Minister Nouri al-Maliki and parliament Speaker Osama al-Nujaifi, and between Maliki and Iraqi Kurdistan Region President Massoud Barzani. The matter is not restricted to the mobilization of electoral bases, but also includes attempts to set the stage for a post-election negotiation phase. The current strictness in policies stems from a feeling that there is no political value in showing flexibility and giving up pressure cards at this stage. The elections in Iraq have become a prelude for laborious negotiations aiming at distributing main positions and ranks. Each party is getting ready for this stage by gathering pressure cards against its enemies.

Nevertheless, it seems that the current escalation might go beyond electoral calculations and threaten the presence of the political system, which was established in Iraq as per the 2005 Constitution. In his weekly address on March 5, Maliki declared that he considers the parliament “finished” and lacking legitimacy. He blamed Nujaifi for “the legal and constitutional violations” that turned the parliament into an institution that “disrupts the government’s work.”

Maliki went as far as calling on MPs to boycott the parliamentary sessions as long as Nujaifi insists on not putting the budget to a vote. In the first threat of its kind, Maliki declared that he would make disbursements from the budget without waiting for the approval of the parliament. Maliki added that he had already challenged the parliament’s work before the federal court.

On the day following Maliki’s speech, Nujaifi held a news conference in which he accused Maliki of leading a coup against constitutional legitimacy and of running away from popular accountability that is represented by the parliament. Nujaifi added that Maliki’s disbursement from the budget without the parliament’s approval is considered “embezzlement of public funds.” Moreover, he pointed out that Maliki and the acting ministers of defense and interior rejected the parliament’s invitation to attend the session and discuss the security issues in the country.

This is the first time that the dispute between both sides has reached the point of withdrawing legitimacy. A huge constitutional crisis is underway, especially since the government extracts its legitimacy from the parliament’s presence under a regime that is considered, at least theoretically, a parliamentary one. Moreover, Articles 62 and 57 of the Constitution respectively state, “The cabinet shall submit the draft general budget bill and the closing account to the parliament for approval,” and “The parliamentary session in which the general budget is being presented shall not end until approval of the budget.” Maliki’s speech, which coincided with his allies’ calls to dissolve the parliament or declare a state of emergency, proves concerns that he might be seeking to remain in power, regardless of the results of the elections.

Coinciding with this escalation, relations between the Kurdistan Regional Government and Baghdad have been heading downhill because the two sides have not been able to agree on the budget law. Barzani threatened “to reconsider relations with Baghdad because the Kurds cannot live under threats.”

Kurdish officials proposed the confederation alternative for the relationship between Baghdad and Erbil to replace the current federal system. Aref Tayfour, deputy speaker of the Iraqi parliament and member of the Kurdish Alliance, issued a statement on Jan. 19 in which he indicated that a confederation was the best solution for Iraq to face “the risks of power monopolization, terrorism and corruption.”

However, the confederation formula proposed by Kurdish officials is still unclear. It is restricted to general ideas that do not solve the basic problems related to the distribution of resources, the disputed regions and the border. Moreover, one side alone cannot declare a confederation, because it is a system for bilateral or multilateral relations. It is also unclear whether the Iraqi Kurdistan Region has discussed the issue with the regional and international forces, especially given that the United States, Iran and Turkey often reiterate that they prefer to preserve Iraq’s unity.

The recent stances of Maliki, Nujaifi and Barzani indicate that the Constitution is no longer capable of containing the conflicts and divisions in the country. The persisting escalation and the failure to reach a political agreement will destroy the rules of the game that has been governing Iraqi politics since 2005. Perhaps this outcome is inevitable due to founding principles that governed these rules and institutionalized ethnic and sectarian divisions. As a result, discords, crises and conflicts over shares, positions and resources have resurfaced. The prime minister wants to remain in power at any cost, and his opponents have not been able to present an alternative or clear vision to reform the system. These are signs that this regime might be on the verge of collapse.