Newly issued judicial decisions, which prevent certain persons from running in the upcoming elections due to outstanding lawsuits against them, have caused a heated debate in Iraq. 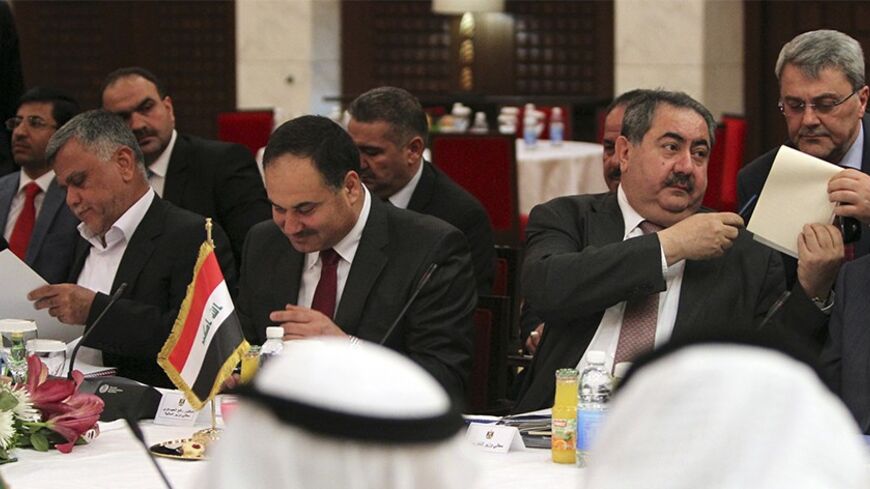 The newly issued judicial decisions disqualifying election candidates in Iraq have reopened the debate on the standards of justice and equal opportunity for candidates.

This time the controversy was accompanied by a debate on the loose mechanisms preventing those covered by the de-Baathification measures from running in the elections, after the judicial committee, which is associated with the Independent High Electoral Commission, issued a resolute and unappealable decision against a group of current members of parliament and ministers. This group includes Rafi al-Issawi from the Mutahidoun bloc, Abdul Dhiab al-Ojailim member of the Iraqiya List, Jawad al-Shahyla and Sabah al-Saadi from the al-Ahrar movement and Mithal al-Alusi of the Civil Movement.

The legal framework for this disqualification comes under Article 8 of the Iraqi Electoral Law, which sets forth conditions that electoral candidates must meet. This includes the condition that candidates “shall be of good conduct and shall not be convicted for a dishonorable crime.” Meanwhile, the lawsuits that have been filed against the disqualified MPs have mostly been related to statements they made, or corruption charges that have not been ruled on given the legislative immunity granted to MPs.

In form, the disqualification goes in line with the text of the aforementioned article and ensures that defendants are brought to court once immunity is removed, and that their victory in the elections will prevent them from facing the charges brought against them for four more years.

As a matter of content, the immunity prevents MPs from being legally considered as “defendants,” and therefore are innocent until proven guilty. The guilt shall only be proven in a resolute and applicable court ruling, which was stated in the same article, provided that a ruling is issued against the disqualified candidate.

This matter adds to the unresolved loopholes that are open to interpretation, which are plentiful in the Iraqi constitution and laws.

It is even stranger that these MPs are not the only ones facing unsettled lawsuits. The Iraqi legal turmoil has allowed over the past years a large number of politicians, and even many ordinary citizens, to be involved in cases that could remain in courts for years.

The standards of justice seem to overlap at this point. For instance, the Electoral Law did not elaborate whether the charges brought against the politician — convicted or not — are considered sufficient to prohibit him from running in the elections. Thus, this prevents many candidates from being disqualified, although their legal conditions seem to be similar to those candidates who have been disqualified. Therefore, the disqualification issue is linked to settling electoral scores to the advantage of political parties.

All this controversy is the product of an Iraqi law that did not specify criteria to govern legislative immunity. Is it absolute or restricted to specific cases? Are there any mechanisms that allow the resolution of unresolved cases within the framework of this “immunity”?

Perhaps the blame can be placed upon the MPs themselves for not following up on these cases with the legal system and for not invoking their immunity when responding to charges. Yet, this explanation is not sufficient, particularly if the MP was actually referred to the judiciary and his case was not settled prior to the elections.

The interpretation of the law must be linked to the supreme value of the popular representation of the MP. The disqualification of any MP having an ambiguous legal status means that the voters’ will has been taken away. This requires additional caution in dealing with such details, particularly since the legislative immunity issue is not randomly brought up in every political experience, and the MP's immunity is not regarded as personal immunity, but rather immunity for the voters’ will.

The recent legal disqualification issue is in fact a booby trap that has been detonated ahead of the elections, and it will lead to a controversy that will last until after the elections — a controversy not less than the one provoked by the de-Baathification measures for more than 10 years now.