European officials say that it should be possible to negotiate a nuclear agreement with Iran without neglecting its human rights abuses. 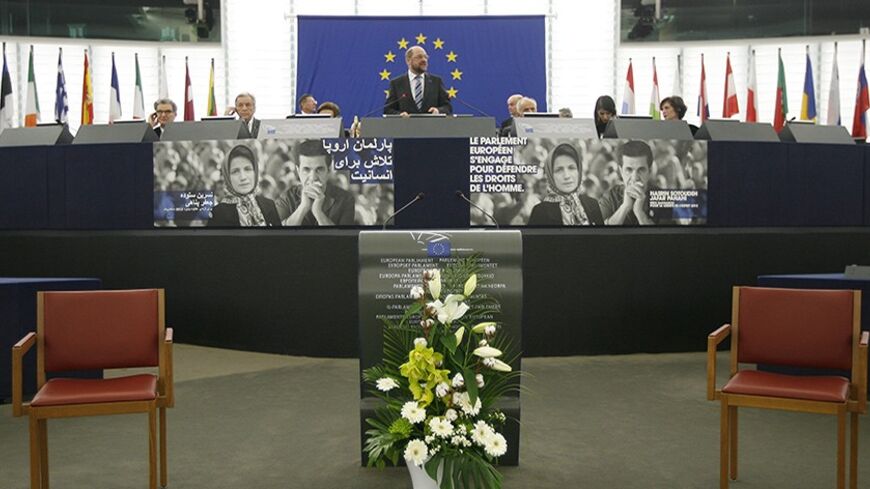 While the world’s attention is focused on Iran’s nuclear program, the European Union and European Parliament have broadened the agenda to include Iran’s poor record on human rights in a way that has spurred new debate within the Islamic Republic.

Marietje Schaake, member of a small European Parliament delegation that visited Iran late last year, told an audience at the Atlantic Council earlier this week that the group made clear to Iranian officials that “human rights for the European Union is a priority and should remain a priority” without jeopardizing ongoing negotiations to achieve a long-term nuclear agreement with Iran. “There is not some zero sum equation between focusing only on the nuclear issue and forgetting about the plight of the Iranian people who live under systematic repression,” she said.

The five-member delegation met with Nasrin Sotoudeh, a well-known lawyer and human rights advocate who was freed from Evin prison along with about 80 other political detainees last September before President Hassan Rouhani attended the annual meeting of the UN General Assembly.

Sotoudeh's meeting with the Europeans, which took place at the Greek Embassy in Tehran, sparked a spirited debate in Iranian media, Schaake said. Many Iranians regard Sotoudeh as a “modern day hero for continuing to defend juveniles on death row and others in very difficult circumstances,” Schaake said.

The European delegation made a further impact by objecting to Iran’s widespread use of capital punishment against those accused of drug offenses.

According to the latest report by the UN Special Rapporteur for Human Rights in Iran, Ahmed Shaheed, Iran executed at least 624 people last year including at least 302 accused of trafficking in or possessing narcotic drugs.

Schaake said that some of those executed might have been killed for other, political offenses.

While Iran has defended its harsh policies as necessary to deal with a record inflow of drugs from Afghanistan, Schaake said that Mohammad Javad Larijani — a member of a powerful family that includes the head of the judiciary and the speaker of parliament — told the European delegation that Iran was considering abolishing the death penalty for drug-related offenses. This would enable the EU, which bans capital punishment, to contribute to Iranian efforts to deal with the scourge of drug trafficking.

“I believe we can play a role in bringing these discussions to the surface and potentially helping those in Iran to find a way to address these issues,” Schaake said.

She noted that Catherine Ashton, the EU high representative for foreign affairs, also caused controversy when she met female activists in Iran earlier this month.

US President Barack Obama, in his historic phone call to Rouhani in September, raised the issue of two Americans detained in Iran and a third American who was last seen in Iran in 2007. Chief US nuclear negotiator Wendy Sherman, in her bilateral meetings with Iranians at nuclear talks, also asks about the three Americans.

A senior Obama administration official told Al-Monitor that the US delegation "always raises the issue of American citizens when we meet with them.

"We have said that at the same time we negotiate the nuclear issue with Iran, we will continue to make clear our serious concerns with Iran over its poor human rights record, its destabilizing impact on Syria and its support for terrorism. The nuclear talks are focused on the nuclear issue — the other issues of concerns are addressed in other ways, including through the State Department’s annual Human Rights Report."

Although it did not single out Iran in the preface by Secretary of State John Kerry, the latest State Department report on human rights throughout the world faults the Islamic Republic for manipulating the electoral process and restricting civil liberties.

The report cites “cruel, inhuman or degrading treatment or punishment … harsh and life-threatening conditions in detention and prison facilities, with instances of deaths in custody; arbitrary arrest and lengthy pretrial detention, sometimes incommunicado; continued impunity of security forces; denial of fair public trials, sometimes resulting in executions without due process [and] the lack of an independent judiciary; political prisoners and detainees.”

Iranian negotiators have expressed concern that a nuclear deal will leave many US sanctions against Iran in place. Some US sanctions legislation against Iran is linked to its human rights record, although the bulk of sanctions deal with Iran’s nuclear program and other issues. Kenneth Katzman, an expert on Iran sanctions for the Congressional Research Service, told Al-Monitor, “Many more US sanctions on Iran are triggered by its designation as a terrorism state sponsor than are triggered because of human rights abuses.”

The United States coordinates with Europeans in multilateral human rights forums but lacks their leverage with Iran because of the lack of formal diplomatic relations. The Europeans all have embassies in Iran and the number of European delegations visiting Tehran has increased substantially since Rouhani’s inauguration.

“The Europeans can definitely raise the issue inside Iran and have done a lot” in stimulating public discussion of human rights in recent months, Hadi Ghaemi, director of the International Campaign for Human Rights in Iran, told Al-Monitor.

Iranian officials have rejected criticism of their record and say the international community should recognize the relatively good status of women in Iran compared to many other countries in the region as well as the gravity of the drug crisis emanating from Afghanistan. Although Iran has refused to allow Shaheed to visit, Iran has invited his boss, Navi Pillay, the United Nations high commissioner for human rights. The European parliament hopes to send the EU special representative for human rights, Stavros Lambrinidis, to Iran and has invited a group of Iranian parliamentarians to visit Brussels next month, Schaake said.

Schaake, a member of the European Parliament for the Dutch Democratic Party, said the delegation also raised the issue of Internet freedom. She was embarrassed, she said, to find that when she tried to access her own website — to show Iranian officials that she had protested the impact of US-led economic sanctions on the provision of medicine and other humanitarian goods to Iran — she found the site blocked.

One of the Iranians assisting the delegation showed Schaake how to access the Web more freely by using a virtual private network — the way in which many Iranians surf the Net.

She said the delegation raised with Iranian officials the fact that Iranian leaders — including Supreme Leader Ayatollah Ali Khamenei, Rouhani and Foreign Minister Mohammad Javad Zarif — all have Twitter accounts even though Iranian officials attempt to block the site for ordinary people.

“It’s unsustainable if leaders go on these platforms to not allow the population” to use them, she said.

She said she found Iranians optimistic about the Rouhani presidency, the likelihood of a nuclear deal and more engagement with the West. She cautioned, however, that hard-liners “still have a very strong voice” and are trying to disrupt efforts by the Rouhani team to reform the system.

Schaake said the European approach to engagement with Iran may differ from that of the United States but that “to achieve the best results, we must be working together in a complimentary way [and] an independent way.”

“We’re not naive,” she added. “These are very difficult challenges but without addressing them and trying, you can never solve them.”

by Murielle KASPRZAK and Joseph SCHMID | AFP | May 26, 2022
END_OF_DOCUMENT_TOKEN_TO_BE_REPLACED