The loss of financial support from Iran has reportedly contributed to Gaza's current crisis, according to Hamas sources. 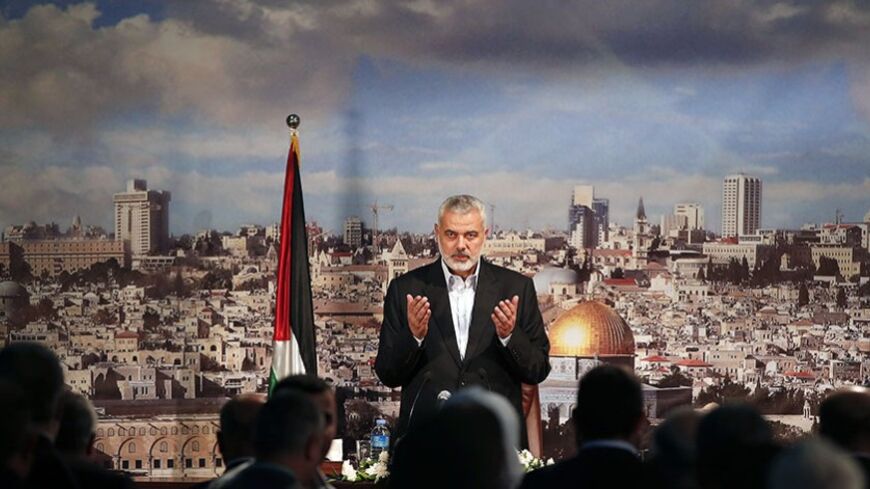 At the peak of the crisis experienced by the Hamas government in Gaza, both internally and externally, Al-Monitor has learned that Hamas decision-makers have started considering withdrawing from the government to avoid further crises.

Hamas is considering making the Gaza government, headed by Prime Minister Ismail Haniyeh, resign, and then announcing a government of “technocrats” made up of businessmen, experts, and independents, who are not linked to a political party or a Palestinian organization.

That option is being considered as Hamas has moved from one crisis to another in recent months, culminating in the Egypt coup that toppled Hamas’ parent organization, the Muslim Brotherhood. This was followed by subsequent security and political measures, such as the closure of the Rafah crossing, the demolition of most tunnels on the border between Gaza and Sinai, and the unprecedented Egyptian decision to ban Hamas.

An official Hamas source in Gaza told Al-Monitor that the movement is trying to come out with minimal losses and is weighing bad and worse options, costly and less costly options. According to the source, the Hamas officials who are considering withdrawal are those who believe that the increased pressure on the movement will harm its popularity, which they fear is in sharp decline. This decline was evidenced by the latest poll from the Palestinian Center for Policy and Survey Research in December 2013, which showed a drop in public support for Hamas in Gaza.

The option of Hamas withdrawing from direct governmental rule is important given that other Palestinian factions have previously rejected Hamas’ call to form a national consensus government. Therefore, the option of Hamas ministers withdrawing from the government doesn’t mean replacing them with ministers from Islamic Jihad and the PFLP, which have repeatedly declared their refusal to take part in such a technocratic government.

The comments last month by Yahya Moussa, the head of the Oversight Committee of the Legislative Council and a Hamas official, last month were noteworthy. He called on the movement to change the strategy it has used during the eight-year siege on Gaza. He said Hamas should develop a strategy capable of either turning the tables or changing the structure, referring to the option of withdrawing from power.

Al-Monitor has learned that Hamas started considering the option of withdrawing from the government when the chances of reconciliation with Fatah declined.

A Hamas figure who supports the “safe withdrawal” option from the government told Al-Monitor that this option reduces many risks for Hamas, noting that many Palestinians in Gaza are holding the government responsible for being unable to secure the minimum needed for a decent life, while Egypt and Israel intensify their blockade.

The official also pointed to a failure to replace the financial support that came from Iran as a key reason for Hamas’ current predicament.

“The option to withdraw from the government is [becoming more likely], given the lack of a light at the end of the tunnel regarding the cool relationship with Iran and the fact that any improvement in the [relations with Iran] is not getting translated into money from [Iran]. This is in addition to the fact that the new allies in Qatar and Turkey are not providing cash support that would help the Gaza government pay its employees’ salaries, which in recent months are being delayed in a worrying way,” he added.

He said that Hamas doesn’t have the time for the “positive waiting” policy that it has been practicing since the coup in Egypt in the hope that things would change and that the Muslim Brotherhood returns. It is clear that relations with Egypt are going from bad to worse.

Another Hamas official, who lives outside the Palestinian territories, also offered support for the move. In an interview with Al-Monitor, the official noted that challenges of running a government and resisting Israel simultaneously.

“It would have been more useful if Hamas realized from the outset that the only option for whoever wants to adopt military resistance is to not enter the political process, elections, and establishing an authority, but to remain on the sidelines so as not to be affected by them and to maintain the militant methods by avoiding dual responsibilities,” the official said.

The official referred to the dual responsibilities of Hamas as a burden, as governing aspects such as public servant salaries and operating commercial crossings are not the functions of a resistance movement, and they divert the resistance from its core purpose: fighting Israel.

The views within Hamas on withdrawing from government are not unanimous. Al-Monitor has learned that there is a current within Hamas that rejects this position and is rallying like-minded officials to prevent Hamas members from supporting it.

Perhaps one of the most prominent voices rejecting this option is from Yousef Rizqa, Haniyeh’s political adviser and a former information minister in the Hamas government. He defended Hamas’ experience in power, saying, “It put Hamas on the international and regional map, and made the group a deciding party rather than a spectator. Today, Hamas is a decision-maker because it has the ability to foil the decision of others. Furthermore, it can be said that there is no Palestinian policy without Hamas, despite the political embargo. Hamas’ experience in power has produced a lot of positives for the national project, which has advanced because Hamas chose to participate in power and compete with Fatah by providing an alternative model and by promoting democracy.”

One Hamas official who agrees with Rizqa told Al-Monitor, “The option to leave government at this particular time would be a ‘voluntary suicide’ presented on a silver platter to Hamas’ opponents and enemies at home and abroad. This is because leaving the government would mean that these opponents and enemies succeeded in their plans to bring down the Hamas government and eliminate Hamas and to portray the movement as having failed in governance in front of the Palestinian public.”

The official warned Hamas not to be hasty in making decisions, pointing to problems among its opponents. “Hamas is not alone in crisis. Its adversaries and enemies are also in crises. Israel, the Palestinian Authority and Egypt, all are suffering from intractable problems. Let’s wait for the regional developments and not rush to a ‘defeatist’ option that would reflect a scared and shaky mindset.”