A lower-than-expected turnout at the anniversary of the assassination of Hamas founder Sheikh Ahmed Yassin has added to speculation about its declining popularity. 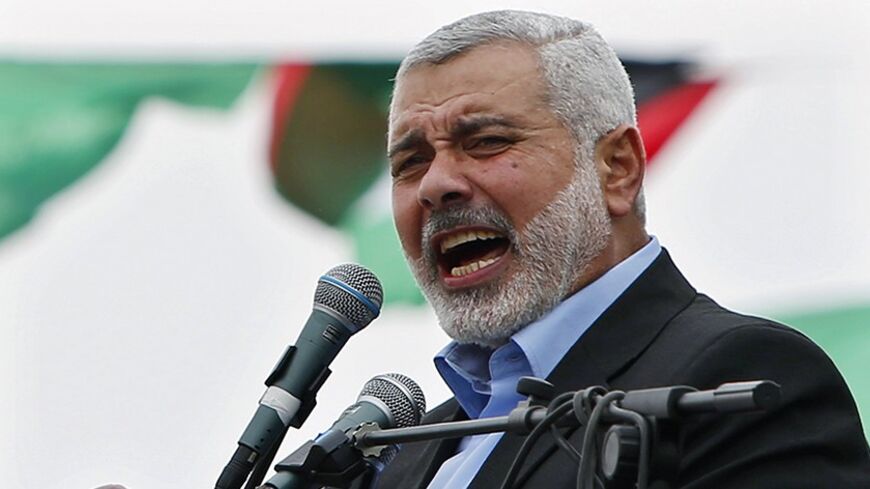 Ismail Haniyeh, prime minister of the Hamas Gaza government, talks to his supporters during a Hamas rally marking the anniversary of the death of its leaders killed by Israel, in Gaza City, March 23, 2014. - REUTERS/Mohammed Salem

GAZA CITY, Gaza Strip — In warm weather on the sandy ground of the Serail Square in central Gaza City, tens of thousands of Hamas supporters came out to participate in the “loyalty and steadfastness” festival held on March 23 to commemorate the anniversary of the martyrdom of Hamas founder Sheikh Ahmed Yassin.

While some believe that the number of participants was not as high as expected, the speech delivered by Prime Minister Ismail Haniyeh, in his capacity as a leader of Hamas’ political bureau, went beyond the usual, according to analysts.

This mixture of a strong speech and a decreased number of participants may be a sign of Hamas' political decline and desperation.

Some of the festival’s participants relayed their impressions to Al-Monitor. Iman and Tasnim (who only wished to provide their first names) and Amal Abu Rukab, in their early 20s, all wore green headscarves bearing the slogan of Hamas. “We are here today to prove to the world that we are committed to the resistance. Our slogan is: 'The Hamas movement represents Islam,'” they said. The three friends affirmed that the message is directed at Israel and Egypt in particular.

Teenage sisters Iman and Ayat Farwana told Al-Monitor, “We came here to tell the world that no matter how much you tighten the blockade, we will be victorious and Hamas will stay in our hearts, come what may.”

The ideological conviction of the participants was clear. The issue is not limited to merely belonging to a party or having a government job, according to Maysa al-Hajjar. “We are struggling with pressures, especially with the blockade, the closure of border crossings and the nonpayment of [public sector] salaries, but this means nothing in comparison with our loyalty to Hamas and our conviction in its intentions. We are seen as terrorists, but we are patient because it is a movement that represents Islam,” said Hajjar, as her children ran around nearby.

Since Al-Monitor’s correspondent was in the women’s section of the festival, and since women and men were segregated, it was a challenge to interview men.

Mahmoud al-Louh, who was accompanied by his wife, said that they came to the festival upon the invitation of Hamas to convey a message to those besieging the movement. “The crisis is growing around us, but we are here to revive enthusiasm in our hearts, because they grew tired,” he said.

Khaled Sharab agreed with Louh’s statements. “We are resisting the blockade and war. For eight years, we have learned patience in the face of adversity. Hamas is the only party that will make Islam victorious,” said Sharab.

Hamas and its government are surrounded by growing crises: the inability to pay salaries, the closure of the Rafah crossing with Egypt for more than 47 days and the ban of Hamas in Egypt, after it was deemed a terrorist movement.

Haniyeh's festival speech did not ignore these crises. “We in Hamas, and in light of the upcoming challenges, are not afraid, even though [these challenges] will be more severe this time. … Hamas will rise up from the paralysis, the 'Qassam' giant [Izz ad-Din al-Qassam Brigades] will overcome inability, and we will create a balance of terror and out of nothing,” said Haniyeh.

At this point, the people loudly chanted, “Move forward Hamas, move! We are the cannon and you are the bullets. … Oh Qassam, our beloved, bombard Tel Aviv.”

Haniyeh reiterated that the challenges emanating from the blockade, the aggression and the campaign aimed at tarnishing Hamas’ reputation and bringing the movement to its knees require reconsideration. “These tactics do not work with us, if [their] decision was [to impose] a blockade, our decision is victory,” he added.

“From within Gaza, I repeat again and again: We will not recognize Israel,” said Haniyeh. He added, “The Gaza blockade is unfortunately getting tighter and tighter.”

Social media users posted photos and comments showing that fewer people than expected turned up at the festival, especially compared with Fatah’s crowds that gathered in the same square on the 48th anniversary of its founding on Jan. 4, 2013.

Abdullah Awad, a political analyst from Ramallah, wrote in a post on his Facebook page: “Hamas, a celebration or a farewell?”

In the same post, Awad noted that, despite Hamas’ efforts to mobilize the largest possible rally by providing transportation, the modest attendance reflects people’s resentment toward the Hamas government, which is adopting an unclear policy.

“Hamas’ discourse is independent, according to Ismail Haniyeh, yet at the same time it supports the Brotherhood and the Syrian opposition. This reflects the movement’s political void,” Awad added.

He also believed that the festival was an indirect attempt to respond to Islamic Jihad, which humiliated Hamas in the last confrontation with Israel. Awad wrote that Hamas showed more interest in staying in power than caring for the people.

Political analyst Atef Abu Seif has another opinion. He believes Hamas found itself in Thomas Hobbes’ “war of all against all.” For this reason, it organized the celebration in Serail Square to send a message that “our popularity is as large as yours, and we have a wide support base,” according to Abu Seif.

“Sometimes shows and celebrations lead to the opposite of their goals. This celebration took place amid a power and gas crisis, a lack of food supplies, an oppression of freedoms and an absence of national unity. Where is the response to the demands of citizens, Egypt and the other parties after [Hamas] was declared a terrorist organization by the only Arab power neighboring Gaza,” Abu Seif told Al-Monitor.

“This situation will not persist forever. Either things will blow up internally, or there will be foreign intervention,” he continued.

In a recently published article, senior Hamas official Ahmed Youssef did not deny the magnitude of the crisis and the movement’s preoccupation with it.

“Many meetings are taking place among Hamas members to discuss the complications of the status quo to overcome the crisis and its burdens, as well as the escalating pressure on our families in the Gaza Strip,” he said.

Youssef believes Hamas has the following options: the status quo could remain as is, while waiting for regional or international changes; the border situation could heat up to export the crisis militarily to the occupation; there could be openness toward Mohammed Dahlan [former Fatah leader in Gaza] and reconciliation with Egypt; or Palestinian reconciliation as an alternative to all of the above.

As soon as Haniyeh’s speech was over, the crowds rushed to get out. Most of them waited for the buses to pick them up. Some were optimistically smiling, while others stood sullenly, waiting for this crowd to change the balance of the crisis.