Hamas sinks in polls after cutting salaries to public servants

Hamas' popularity has fallen behind Fatah in the Gaza Strip, according to recent polls, as frustration mounts over its handling of the territory's economic crisis. 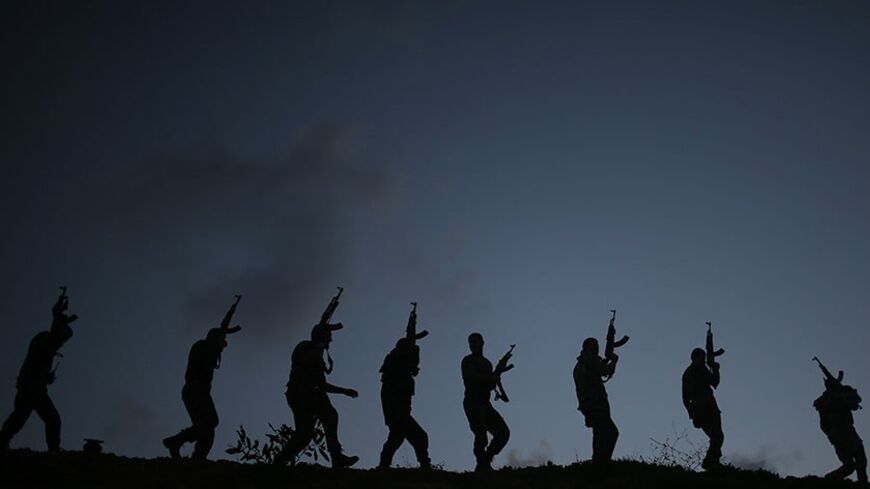 GAZA CITY, Gaza Strip — On Feb. 2, concerns seemed evident on the faces of governmental employees in the Gaza Strip, as they lined up in a long line in front of the Hamas-affiliated National Islamic Bank. They were waiting to receive their salaries, which had been reduced by 50% for the third month in a row.

According to Iyad Abu Hein, director-general of the treasury's general administration in the Ministry of Finance, the government each month pays salaries amounting to 88 million Israeli shekels ($25 million) to 46,000 employees, as per a press statement published on the ministry’s website.

Al-Monitor met with Mohsen, an employee at the Ministry of Interior. “For three months now, I have been receiving only half of my salary, which means I cannot meet the minimum requirements of my family,” he said. He added that he has become indebted to many stores and to some of his relatives to meet his family's monthly needs.

Mohsen, who refrained from mentioning his full name, said that he lives in a rented house and his landlord is no longer taking the economic circumstances of the government into consideration. His landlord has been insisting that he pay all his overdue rent at the beginning of next month, otherwise he will ask Mohsen to evacuate the premises.

Arij, who works at the Ministry of Education, is facing the same hardship. “Half salaries make employees’ lives very difficult. How can I meet the requirements of my family, consisting of seven members, on 1,000 shekels?” she asked.

Arij, who also refrained from mentioning her full name, became the only provider for her family after her husband stopped working. She said that the Israeli blockade and the closure of tunnels are among the reasons behind the poor living conditions, but she also blamed Hamas to a large extent for the deterioration of the economic situation.

“This ongoing crisis and other economic crises are likely to destabilize Hamas’ popularity and affect its chances of winning in any future elections,” Arij told Al-Monitor.

Mohsen shares the same view as Arij. He believes that should the crisis drag on, Hamas will be seen as unable to pay salaries; hence, reducing its chances to win in any future elections.

“I cannot endure this situation any longer. The government should work to resolve this crisis as soon as possible. If it fails to do so, I suggest it should give a chance to another government,” he added.

A poll of Palestinian public opinion, conducted by the Palestinian Center for Policy and Survey Research (PCPSR) in December 2013, showed that the popularity of Hamas has sharply declined in the Gaza Strip, against the backdrop of the ongoing political clash with Egypt and the subsequent closure of the Rafah crossing.

The survey revealed that in the event that new parliamentary elections were held, 71% of eligible voters would participate and Hamas' Change and Reform list would receive 29% of the vote, while Fatah's list would get 40%.

Conversely, the poll showed Hamas’ popularity was not affected in the West Bank. However, Youssef Rizqa, adviser to Gaza’s Prime Minister Ismail Haniyeh, dismissed the poll, saying it was unlikely that this crisis or other economic crises would undermine the popularity of Hamas.

“It is wrong to limit the [chances of winning] in elections to Hamas’ ability to pay [salaries]. A large segment of the Palestinian people believes in the vision and strategy of Hamas in action,” he told Al-Monitor.

“Hamas is refraining from taking political money from European countries, because they ask that it changes its stances regarding the ongoing conflict with Israel in return. This fact is likely to increase its popularity rather than undermine it,” he added.

On the other hand, Maher Hassouna, an employee at the Ministry of Health, said in response to these statements, “While it is true that Hamas has been punished for its political positions against Israel, mainly because it did not recognize Israel, I do not think that the citizens should pay the price for that.”

While speaking to Al-Monitor, Hassouna did not hide his anger about the reduced salaries that he has been receiving for the past three months. He stressed that the economic situation in the Gaza Strip “needs radical solutions.”

Zaza tried to calm the situation and absorb the distress, as he stated that he expected this crisis "to be over soon."

“The government is working to overcome this financial hardship,” he said in a statement to the Sawt Al-Aqsa radio station.

Moin Rajab, an economics professor at Al-Azhar University in the Gaza Strip, expressed his concerns about the failure of the government to resolve this crisis, which will lead it to clash with its employees. “Clashes are likely to happen. I hope that things won’t reach this stage, which would adversely affect the citizens’ interests.”

“The Hamas government, the governments of the West Bank and Israel as well as Egypt's are all part of the problem and responsible for the state of frustration and discontent among citizens — because of the successive economic crises, most notably the crisis of salaries,” he told Al-Monitor.

Rizqa, on the other hand, said that this state of discontent “is not related to the Gaza Strip alone, but it is the case in all Arab countries because of the political and economic changes.”

He stressed that his government “is going through financial distress, resulting in this crisis, because of the financial and economic blockade that has been imposed on Gaza for many years now.” He added that the distress has surfaced in recent months after Egypt demolished the tunnels, which served as an essential source of funds through taxes collected on incoming goods.

Regarding whether or not these policies are viable, Rajab said, "The volatility of political stances toward Gaza make the views of the Gazan public somewhat confused. Thus, I cannot predict the nature of the next state. But I can say that it will witness a tightening of the siege and growing crises."

Although Rizqa and Zaza held out hope that the government will soon resolve the salary crisis, Hassouna believes that these statements are only attempts to contain the anger and discontent of the employees. “The economic situation will remain in a state of clinical death until another government takes over, or until Israel stops its penal policies on Gaza.”