While Egyptian Defense Minister Abdel Fattah al-Sisi has recently called on Egyptians to embrace austerity, some question whether state officials will also have to cut down on their opulent spending. 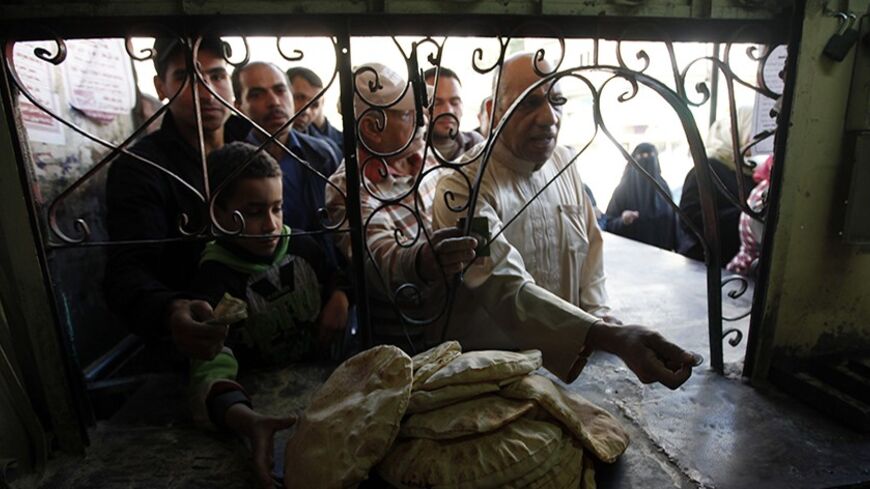 People line up for subsidized bread at a bakery that uses a smart-card payment system in the Suez Canal city of Port Said, 170 km (106 miles) northeast of Cairo, Feb. 24, 2014. - REUTERS/Mohamed Abd El Ghany

“Our economic circumstances, in all sincerity and with all understanding, are very, very difficult.” “I wonder, did anyone say that I will walk for a little bit to help my country?” “The country will not make progress by using words. It will make progress by working, and through perseverance, impartiality and altruism. Possibly one or two generations will [have to suffer] so that the remaining generations live.” These are parts of the speech by Egyptian Defense Minister Abdel Fattah al-Sisi on March 6 at the opening of the second conference of young doctors and recent graduates.

Some have considered Sisi's speech to be an invitation to austerity for the Egyptian people, prompting activists on social media and forums to spread a video showing Sisi’s Land Rover, which is estimated at 2.5 million Egyptian pounds ($360,000). The video is titled “Sisi begins a campaign of austerity and walks.”

Some political and media analysts considered the speech Sisi's economic program for the presidential race.

Faraj Abdel Fattah, an economics professor at the faculty of economics and political science at the University of Cairo, said that Sisi’s call does not mean austerity, but rather rationalizing consumption by lowering spending by the people and the government, “because there are many examples of extravagance in our daily lives and in government spending, for example.”

Abdel Fattah told Al-Monitor that rationalizing spending by state institutions begins by reducing spending on the officials’ convoys, allowances for hospitality and their large numbers of advisers and their salaries. He said that a large number of citizens live below the poverty line and cannot lower their spending. Thus, the responsibility for reducing spending mainly lies with the government, because it has a budget and can decide how to spend it.

In a related context, Abdel Fattah said that this does not mean that the task of lowering expenditures is the responsibility of government alone, because people should know that Egypt is passing through an economic crisis and that each citizen should follow a policy of austerity, as did the Egyptian people from the June 1967 naksa (setback) until the war in 1973. They did so to save money to support the Egyptian army at the time.

Susan Nada, a lawyer with the Egyptian Center for Economics and Social Rights, agreed with a lot of what Abdel Fattah said. She told Al-Monitor that government spending on state institutions is very wasteful, with all the convoys and allowances for government officials and deputies.

Nada also told Al-Monitor that restructuring the wages would greatly contribute to solving the crisis of low-income people, without putting pressure on the state budget and without requiring people to reduce spending.

She said that wage restructuring begins by determining the maximum wage and by distributing wages, allowances and bonuses in a fair way, pointing out that during the past three years “the salaries of Interior Ministry staff have increased by about 300%, while the end-of-service benefits for drivers of public transport are not being paid,” she said.

Abdel Fattah told Al-Monitor that he supports applying a maximum wage before the minimum wage, “because it will save state resources that are used to apply the minimum wage. But the laws have excluded employees from some state sectors, which has harmed the law’s credibility.”

According to him, the reason why wage reform was not applied is because some fear that certain essential state employees would leave their jobs and would be replaced by their subordinates. And that matter depends on the government’s strength, its good management, security and political stability, according to him.

Supporting those who deserve it

Nada told Al-Monitor that government support is not reaching those who truly deserve it. The state subsidizes energy for factories of steel, Cleopatra Ceramics and cement plants, and for some foreign investors, and those factories do not pay the progressive tax, which applies to the average citizen, despite the profits that those factories make.

Abdel Fattah noted that the liberalization of energy prices and changing state subsidies for investors needs in-depth studies regarding those factories’ products, whereby the studies will determine the price elasticity for each product, whether the investor can bear losing the subsidy and whether the price of the product will increase.

Mustafa al-Saeed, an economist and former economy minister, said that the Egyptian economy is going through a very critical period and that supporting the Egyptian economy will not happen unless the state provides facilities for investors in the form of loans, which would require austerity for their interest to be paid.

Saeed also told Al-Monitor that reducing state spending is important but will not contribute to solving the economic crisis, nor will it have a strong impact as some expect.

Nada noted that subsidies, wages, energy, loans and government spending have been parts of the equation since Jan. 25, 2011, and nothing has changed so far. Moreover, according to her, nothing will change as a result of the speeches of politicians regarding the need to reduce spending. She told Al-Monitor that Sisi’s speech is “one from a series of speeches of Egyptian leaders since the era of former President Anwar Sadat. Nada said, "[Sisi’s speech] doesn’t differ from Sadat’s speeches regarding belt-tightening, or from [ousted President Hosni] Mubarak’s speeches about rationalizing spending, or from [former Prime Minister] Hisham Qandil’s speeches about wearing cotton clothes in summer and only having one air-conditioning unit.” She pointed out that all those are failed policies, where the citizen bears the burden of the state’s irrational spending.

Meanwhile, Abdel Fattah claimed that with more than 40% of Egyptians below the poverty line, austerity will be in favor of the poorer classes — which will not practice austerity — and that austerity, or “rationalizing expenditure and consumption,” as he called it, will fall on the richer classes to help the classes most in need. Thus, according to Abdel Fattah, Sisi’s speech is a call to redistribute wealth in a just manner.

But Saeed wondered: “If austerity is part of Sisi’s economic program, as some expect it is, will austerity be a means to thwart the hopes of low-income people and the poor to get fair wages? Or would it be a way to redistribute wealth? Or is it the inevitable choice that must be endured by the people to overcome the economic crisis?” And if it was the latter, he wondered whether the people will have to endure it alone or alongside the officials and the leaders of state institutions.