Egypt is struggling to find a way to leverage its ties with both Russia and Saudi Arabia to its own advantage. 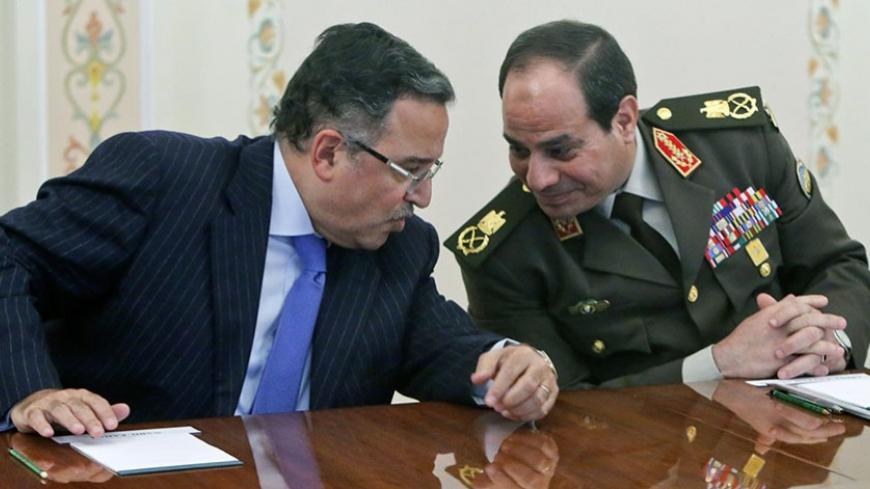 To say that relations between Russia and Saudi Arabia lately have been uneasy would be an understatement. Russia has been fuming for a while over what it perceives to be Saudi financing of Islamist terrorists in Russia, and Saudi Arabia in turn has been furious over Russia's continued support for Iran and Syria — two regimes that the Saudis would like, more than anything, to see broken or overthrown.

The frosty relations between the two respective regional powerhouses have been heating up recently, and not in a good way. On Feb. 24, Russia issued a statement accusing Saudi of planning to arm Syrian rebels with more advanced weaponry, and the next day Saudi Arabia responded with a statement condemning Russia and stating, “[Vladimir] Putin has lost Arab hearts with his support for [Bashar al-]Assad.” The fight spilled over into the Saudi Twittersphere the moment Russia moved into Crimea, with Saudi hashtags accusing Russia of moving there to kill the Crimean Muslim population, and exulting the virtues of the Ukrainian soldiers who will teach the Russians a lesson. And right in between those two, there is Egypt.

Egypt, in terms of foreign policy, faces a unique conundrum: Its interim government needs Saudi and Gulf money to survive on a monthly basis, while its military is publically cozying up to Putin and announcing a $2 billion arms deal, which it said will be financed by Saudi money. Needless to say, there has been no arms deal yet, and Saudi Arabia is very likely to waste $2 billion on second-rate weaponry with unreliable after-sales service that Egypt doesn’t need — especially if the seller is Russia, given its own tense relations with Moscow and Washington’s likely opposition to the sale. The Saudi media was also quick to try to capitalize on the Crimean crisis, by reminding Egyptians that 2,500 Egyptian soldiers died defending Crimea from the Russians back in the mid-19th century, which had very little effect. Egypt's position is bewildering analysts: What exactly is Egypt up to?

The theory being advanced in some analysts' circles is that Egypt is playing a new role clandestinely, one that is a proxy between Gulf countries and Russia. They like to point to a number of specific facts and dates to support this. First, there is the fact that despite what the Egyptian media is reporting, Russia has not made any sales agreement to Egypt, yet there were two Russian military delegations that visited Egypt in less than two weeks in February, the last of which was on Feb. 24, right before the public condemnations between Russia and Saudi began. Then they point out that on March 7 Saudi Arabia made its big announcement declaring the Muslim Brotherhood a terrorist organization, alongside Jabhat al-Nusra and the Islamic State of Iraq and al-Sham (ISIS) and demanded the immediate return of any Saudi citizen fighting abroad in Syria. To those following Syria, something very strange was afoot here: Suddenly, the Saudi and Russian positions on Syrian rebels were aligned.

Was some kind of rapprochement really in effect? Has Egypt been secretly playing intermediary between Saudi and Russia? It is tough to say for sure, but the answer is most probably no, and that those who are advancing this theory are either grasping at straws, or would like to lend support to El Watan’s laughable report on the new regional alliance Egyptian army chief Abdel Fattah al-Sisi is leading, which includes Egypt, Russia, Saudi Arabia, Kuwait and the UAE against a Western regional alliance led by the US that includes Turkey and Qatar. Either way, this theory, while satisfying to the conspiracy-addled mindset of many Egyptians, just doesn’t hold water. Let’s examine the facts, shall we?

The actions of Russia and Saudi Arabia are springing from an awareness of a new reality: The United States is no longer the world’s policeman, and is focusing on becoming a major oil and gas producer whose production is expected to surpass both Russia and Saudi Arabia. The United States is leaving the world to settle its affairs based on the work of the respective regional powers. Given what they perceive is a growing vacuum, Saudi Arabia — and the rest of the Gulf — are investing in the Egyptian army as their most reliable option to counter Iran. Russia, for its part, is determined to create buffer zones around its borders and solidify its position as the regional power that Europe has to contend with.

Unfortunately for Egypt, no such plans or ambitions exist; it’s just happy to be in the news.