Egypt fears backlash if it cuts ties with Qatar

Egypt is hesitating to join the Gulf Cooperation Council (GCC) and cut ties with Qatar, because the government fears the repercussions such a step would have for the many Egyptians working in Qatar. 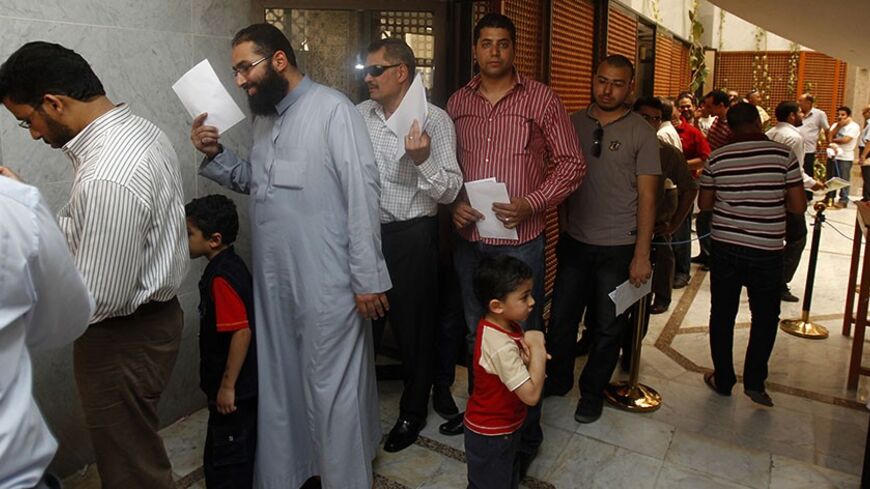 Egyptian expatriates living in Qatar wait for their turn to vote at the Egyptian Embassy in Doha, May 12, 2012. - REUTERS/Mohammed Dabbous

On March 6, the Egyptian Council of Ministers declared that Egypt’s ambassador to Qatar, who was summoned to Cairo in early February, will not return to Doha at the moment, and that he is on indefinite leave. At the same time, Egyptian politicians asserted that the presence of Egyptian workers in Qatar is the only reason behind the Egyptian government not taking a decision to finalize withdrawing its ambassador as Saudi Arabia, the United Arab Emirates (UAE) and Bahrain did, despite a strong Egyptian desire to do so.

Various political forces in Egypt asked the government to follow suit on the Gulf Cooperation Council (GCC) decision and to formally withdraw Egypt’s ambassador from Qatar and announce the cutting of ties, after Qatar wasted all opportunities given to it and insisted on interfering in Egypt’s internal affairs and damaging Egypt’s security.

There were media reports that the Egyptian government is seriously considering a similar position to that of Saudi Arabia, the UAE and Bahrain.

She added, “The interests of Egyptian workers must be protected if the embassy is closed, so that they don’t pay the price of strained political relations between the two countries. There are daily problems and transactions that require [Egyptian] workers abroad to go to their embassies. Also, we cannot guarantee that there won’t be acts of revenge against Egyptians in Doha as a reaction to the escalating political crisis. [We should avoid] a repeat of the crisis of the Egyptians in Libya, where they are being killed tragically.”

Kheir pointed out that despite the presence of international conventions safeguarding the rights of migrant workers, Arab countries including Qatar did not sign many of these agreements. Moreover, she said that Qatar, like other Gulf states, still uses the sponsor system, which is akin to a system of forced labor and slavery. She added that there are reports confirming that Qataris are violating the rights and the humanity of Asian laborers, specifically in the preparations to build facilities and playgrounds for the FIFA World Cup 2020, set to be held in Doha. Despite all these abuses against migrant workers in Qatar, Kheir said Egypt is not ready for a crisis as major as having Egyptian workers expelled from Doha, due to Egypt’s difficult economic conditions.

According to Khudr, Rajab Maatouk, the secretary-general of the union of the Arab Labor Organization in Cairo, took steps to quickly reverse the decision to put Qatar as head of the conference, because Qatar does not respect workers’ rights and because migrant workers in Qatar are paid low wages. Khudr said that these workers are humiliated with employment contracts that do not respect international agreements, and Qatar makes no effort to protect their social and economic rights.

“Qatar has a bad record with the Egyptians because of its role in the January 2011 and June 2013 revolutions. Qatar played a clear inciting role and sought to create confusion and support terrorist groups in Egypt,” Khudr said. He added, “After the positions of Saudi Arabia, the UAE and Bahrain, Egypt should follow suit and formally and immediately cut ties.” With regard to the concerns of the future of Egyptian workers in Qatar, Khudr said that if the promises of the government of Ibrahim Mahlab became reality regarding taking care of the workers and the plans to make new investments, then the Egyptian labor market would be able to absorb the Egyptians working in Qatar now.

Kamal Abbas, the coordinator of the Services Trade Union Center, told Al-Monitor that so far Qatar has taken no action that adversely affects Egyptian workers, and that he received no complaints that Egyptian workers have been fired because of the strained relations between Egypt and Qatar. He stressed that Egypt has the right to do what’s necessary to protect its national security, and that there are international labor conventions and principles that force states to respect the rights of migrant workers regardless of the political tensions with their country of origin.

Egyptian workers in Qatar are the only obstacle preventing Egypt from formally cutting ties with Doha, although relations have been effectively cut since the ousting of President Mohammed Morsi, Qatar’s nonrecognition of Egypt’s road map and in light of Egyptian rising anger with Al Jazeera.