No reconciliation so far with Egypt's Muslim Brotherhood

As both the Muslim Brotherhood and much of the Egyptian public seem opposed to a reconciliation between the Brotherhood and the current regime, questions arise concerning the future of the group. 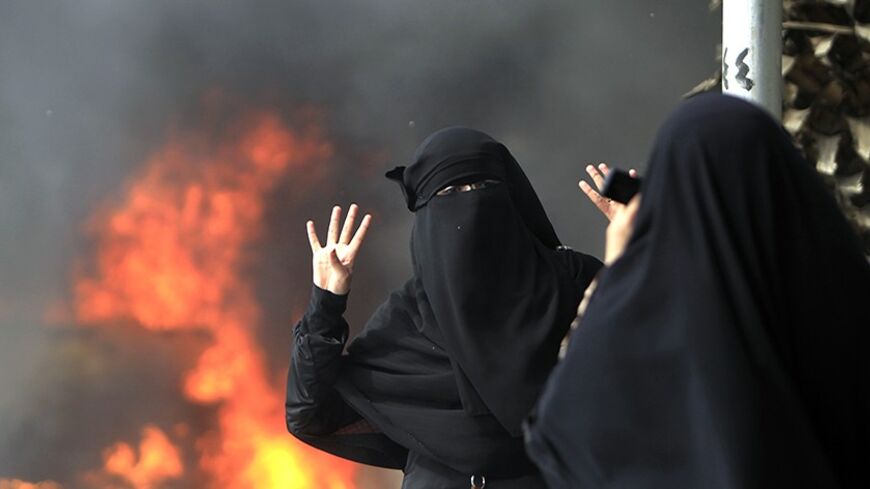 A student and supporter of the Muslim Brotherhood and ousted Egyptian President Mohammed Morsi gestures with the sign "Rabaa," or "Four," in front of a burning car during a protest inside Cairo University, March 9, 2014. - REUTERS/Mohamed Abd El Ghany

"There is no longer a basis for reconciliation," said Hisham Dessouki, a leader in the Freedom and Justice Party (FJP), the political arm of the Egyptian Muslim Brotherhood. Meanwhile, Ammar Ali Hassan, a political scientist specializing in the affairs of political Islam, said, "The word 'reconciliation' is deceptive and does not reflect reality." And Mukhtar Nouh, a former leader in the Brotherhood who has defected, said, "There have not been any reconciliation initiatives since June 30, and there won't be any [in the future]."

"No reconciliation initiative has been carried out since June 30, 2013, until today. Most [efforts in this regard] were characterized by mere chats between some mediators and Brotherhood leaders. But these chats did not produce any initiative with clear conditions and steps," Nouh told Al-Monitor. This completely contradicts what has been reported by Egyptian news sites and newspapers.

He said that there will not be any reconciliation initiatives between the state and the Muslim Brotherhood, since, according to him, the state will not reconcile with an entity that has no legal or legitimate presence.

Meanwhile, Hassan commented on the idea of reconciliation, saying, "The word 'reconciliation' is deceptive and does not reflect reality, because reconciliation is something that occurs between two equal forces. This is not the case in the conflict between the Brotherhood and the state, given that it is very evident that the state maintains superiority [in this conflict]. The more accurate term would be 'rehabilitating' the Brotherhood so it can return to political life."

Hassan explained to Al-Monitor that the rehabilitation of the Muslim Brotherhood should be carried out through a comprehensive initiative proposed by the group, and they should not wait to negotiate with the regime. According to Hassan, the initiative must include a number of basic items, namely:

Hassan stressed that these items are not only necessary to end the conflict between the Muslim Brotherhood and the state but also to win the sympathy of the public, which currently rejects the idea of reconciliation.

Nouh supports a similar proposal and said that the path is open for group members to practice politics again through the FJP or establish new political parties. However, they must completely abandon the term "Brotherhood," as it is not a legitimate entity, according to him.

Nouh notes that political deals are the basis of the survival of the group. "In the era of President Anwar Sadat, the group returned to its work through support provided by [Sadat] to harm communist currents. While in the era of former President Hosni Mubarak and under the military council led by Field Marshall Mohamed Hussein Tantawi, the group continued its work because it was the entity that frightened the United States, which feared the presence of Islamist rule in Egypt," added Nouh.

When asked about the prospects for the return of the Brotherhood through a deal with the current regime or any future regime, Nouh said that this is not out of the question. However, this is not up to political expectations, but rather it is an issue of fate, according to him. Perhaps a leader will come along who allows them to return to political life, or perhaps another will "completely eliminate them as Muhammad Ali did in the massacre of the Mamluks," said Nouh.

In the same context, Nouh believes that the Brotherhood still has the chance to enter into future deals. According to him, an important part of its basic structure continues [its work] — i.e., the administrative offices, the majority of whose leaders embrace Qutbist ideology (the ideology of late Brotherhood leader Sayyid Qutb). Nouh said that these administrative offices are the primary structure of the Brotherhood, yet the Interior Ministry is lacking a lot of information about this structure.

Hassan said that in the world of politics anything can happen, and it is possible that deals will once again take place between the Brotherhood and the ruling regime. However, this is difficult currently, because the public rejects the Brotherhood and this may constitute an obstacle in the face of these regimes. According to him, it may take decades for society to accept the return of the Brotherhood in its past form, as a secret organization.

Hassan said that fraud and deception are part of the Brotherhood's approach. He told Al-Monitor that the group began this deception to attract revolutionary groups into its ranks, yet this is illogical and ended in failure. "It is possible that the Brotherhood [tries to] infiltrate existing Islamic parties such as the Wasat Party, the Authenticity Party and the Building and Development Party," he added.

Hassan noted that the group could establish new civil parties, and unknown Brotherhood cadres could join these parties, thus spreading on the ground once again. This was the case with the Turkish experience, through the Justice and Development Party (AKP), which is led by Prime Minister Recep Tayyip Erdogan and Abdullah Gul. The AKP has not broken off ties with the international Muslim Brotherhood and still supports the Brotherhood presence in a number of countries including Egypt.

The situations remains as is

Dessouki said that there is no longer a basis for reconciliation. According to him, this is because even if the Muslim Brotherhood, the FJP and the [pro-Brotherhood] Alliance to Support Legitimacy waive their demand for what they call "the return of legitimacy," they cannot give up on their demand for retribution for the martyrs who have died since July 3.

Dessouki told Al-Monitor that the Muslim Brotherhood, the FJP and the Alliance to Support Legitimacy refuse to participate in any elections, because the elections "will [involve fraud]."

Thus, Dessouki ruled out the possibility that the Brotherhood returns to political work via the FJP or other Islamist parties — such as the Wasat Party or the Authenticity Party — and therefore the situation will remain as is.

Hassan stressed that it is possible things will remain unchanged, saying, "The leaders who control decision-making in the Brotherhood do not want to return to political work, unless it involves the same violations of the past, where the group is an illegitimate entity that isn't subject to any oversight.” He pointed out these leaders who control decision-making are doing so from behind bars, as was the case in the Mubarak era, when many members of the Brotherhood's Guidance Office were imprisoned. Nouh agreed with this, saying that the Guidance Office leaders who embrace extremist approaches and believe in Qutb's ideas — along with leaders of the Brotherhood's administrative offices — will be an obstacle in the path of restructuring the group. They will hinder its return to political work in a new manner that is not characterized by secrecy, Nouh noted.

However, it is difficult to imagine things staying as they are, especially in light of recent reports on news websites in Egypt claiming that the Brotherhood risks losing the support of its partners in the Alliance to Support Legitimacy. Nouh commented on this, saying that the Wasat Party and Authenticity Party disagreed with the Brotherhood regarding the latter's coordination with some terrorist groups. He added that the dispute intensified when the activities of these terrorist groups became outside the control of the Brotherhood, as is the case currently.

Changing the Brotherhood's leaders and their minds; the nature of the political regimes that will rule Egypt in the coming period; these regimes' willingness to ally with the Brotherhood again; the activity of the security services; the potential for the Brotherhood to gain new allies and lose current ones; and their ability to gain public sympathy once again will determine the way in which the Brotherhood returns to political life — whenever that return may be.