Two congressional letters on US nuclear diplomacy with Iran appear to signal that Congress will allow the P5+1 talks with Iran to continue without additional sanctions legislation, at least for the time being. 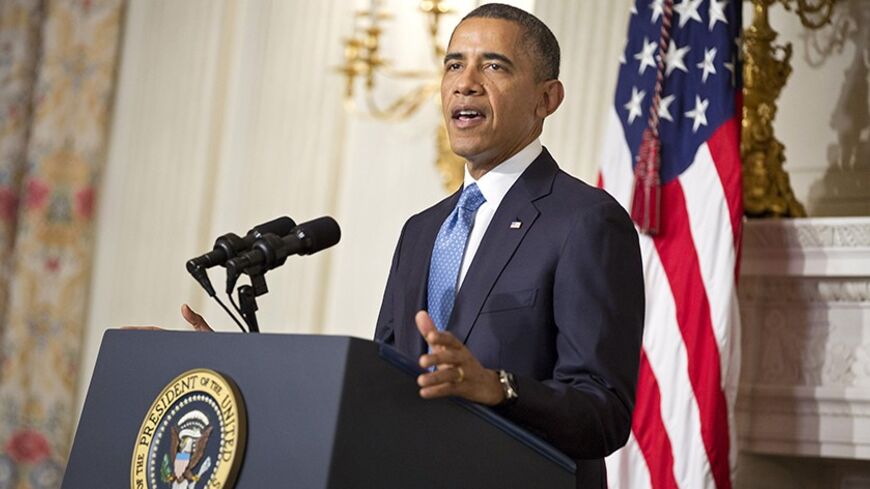 US President Barack Obama makes a statement about an agreement reached with Iran on its nuclear program at the White House in Washington, Nov. 23, 2013. - REUTERS/Joshua Roberts

The Obama administration has gained space to negotiate a nuclear deal with Iran as Congress struggles to unify around a single set of demands for a final agreement.

Proponents of tougher conditions claimed victory on Tuesday when 83 senators signed on to a letter to the president spelling out their conditions for a final deal. The letter doesn't have force of law, however, and a less prescriptive letter garnered 395 signatures in the House — along with several key Democrats in the Senate.

Some congressional insiders see the letters as further proof that pressure on the administration has lifted, a clear win for Obama as negotiations resume in Vienna this week.

They point out that Congress over the past few months has gone from considering sanctions, to delayed sanctions, to a resolution — in the end settling on mere letters.

"Congress has a much bigger hammer than this," said a House aide involved in the debate. "We ended up with a letter … where Congress can still be value-added and shape the asks during the negotiations and help the administration define what they're going to be asking, but at the same time can be respectful of the negotiators' space."

Both letters were pushed by the American Israel Public Affairs Committee (AIPAC), which has been determined to make its voice heard since Senate Majority Harry Reid, D-Nev., put an Iran sanctions bill it supported on hold indefinitely.

In a statement, AIPAC called the support for the Senate letter an "overwhelming demonstration by the US Senate of its determination to prevent Iran from achieving nuclear weapons capability."

Defenders of the nuclear talks see the Senate letter as a sign of congressional hard-liners' weakness, not their strength.

"At the end of the day, we don't see it as having a significant impact" on ongoing diplomatic talks, said Dylan Williams, director of government affairs at the liberal pro-Israel group J Street. "It really is kind of the Plan C of those who were seeking to impose additional terms for diplomacy on Iran."

The Senate letter was spearheaded by Senate Foreign Relations Committee Chairman Robert Menendez, D-N.J., and Senate Armed Services Committee member Lindsey Graham, R-S.C. It makes it clear the Senate retains the power to undo most sanctions if a deal is struck and insists that the administration "work together" with Congress to be able to "rapidly and dramatically expand sanctions" if negotiations fail.

"I think the Senate has not only a right, but a responsibility, to opine on what an end result should look like since many of the authorities that exist that would be needed for such a deal to be achieved would need Senate action subsequently," Menendez told Al-Monitor.

The letter spells out the senators' belief that Iran has "no inherent right to enrichment," that any final deal must prevent Iran "from ever having a uranium or plutonium path to a nuclear bomb" and that Iran "must give up its heavy water reactor at Arak."

"As these negotiations proceed," the Senate letter vows, "we will outline our views about the essential goals of a final agreement with Iran, continue oversight of the interim agreement and the existing sanctions regime, and signal the consequences that will follow if Iran rejects an agreement that brings an end to its nuclear ambitions."

The Senate letter has caused heartburn among those who worry that it's too prescriptive. They've instead embraced the House letter, which was negotiated between House Majority Leader Eric Cantor, R-Va., and House Minority Whip Steny Hoyer, D-Md., after they failed to agree on a resolution at the end of last year.

The House effort starts by embracing the administration's "diplomatic effort" and states that it's "hopeful a permanent diplomatic agreement will require dismantlement of Iran's nuclear weapons-related infrastructure."

"We do not seek to deny Iran a peaceful nuclear energy program," it states, "but we are gravely concerned that Iran's industrial-scale uranium enrichment capability and heavy water reactor being built at Arak could be used for the development of nuclear weapons."

Jamal Abdi, policy director with the National Iranian American Council, said his group felt "vindicated" by the support for the House letter. "The letters still contain some problematic ambiguities," he said, "but the Hoyer-Cantor letter in particular is not issuing demands or setting unworkable expectations for talks."

The chairman of the Senate Armed Services Committee, Michigan Democrat Carl Levin, appears to share similar concerns. He took the initiative of circulating the House letter as an alternative to the Menendez-Graham bill in the Senate and has attracted about 20 signatures, according to J Street — including some who signed both letters.

"My views are very clear that I want to put a hell of a lot of pressure on Iran," Levin told Al-Monitor. "I think the way we do it is important and the rhetoric we use is important, too, as to whether the negotiations have a chance, albeit slight, of succeeding."

Levin has previously said Congress shouldn't dictate what's in a final agreement, calling it “interference in an executive function.”

“We shouldn't be able, I don't think, to dictate the terms,” he said in January after being briefed by Obama's top Iran negotiator, Undersecretary of State Wendy Sherman. “I don't think we should prejudge what's in a final agreement. We should express our opinion about what ought to be in the agreement; that's traditional and appropriate.”

Levin has been able to count on the support of some top Democrats. Nine committee chairmen joined him in a December letter urging Reid not to bring up the sanctions bill; only two of those — Senate Appropriations Chairwoman Barbara Mikulski, D-Md., and Senate Finance Chairman Ron Wyden, D-Ore. — have signed on to the Menendez letter released Tuesday.

Some don't see the letters as mutually incompatible.

In a statement Tuesday, March 18, Cantor said his effort "puts the House on record about what we expect in any further deals with Iran." It was signed by 216 Republicans and 179 Democrats.

"This letter represents a bipartisan consensus about the framework of such a deal, and about the extraordinary inspections and verification measures that must accompany any such deal," Cantor said. "Iran must understand that Congress will be united behind additional sanctions and other measures if it does not meet these conditions and verifiably abandon its pursuit of a nuclear weapons capability."

The House aide said their main difference was one of tone — the House version is seen by some as more "respectful" — but both demand a verifiable dismantlement of Iran's nuclear weapons capability, which is in line with the Obama administration's own stated intentions.

"I'm signing both. How's that for a Solomonic decision?" said Sen. Angus King, I-Maine, who has worked closely with Levin to prevent a sanctions vote.

"I was very much opposed to legislation — I think a letter is different," King said.

"The Senate one is more specific; it lays out a series of goals for the negotiation," he said. "But I decided to sign on to it because I think it may strengthen the president's hand in negotiations."