Valentine’s Day a day of hope in Iraq

Iraqis began celebrating Valentine’s Day after the fall of the regime of former President Saddam Hussein in 2003, but it is not just for couples — it serves as a means to express one’s love for the country. 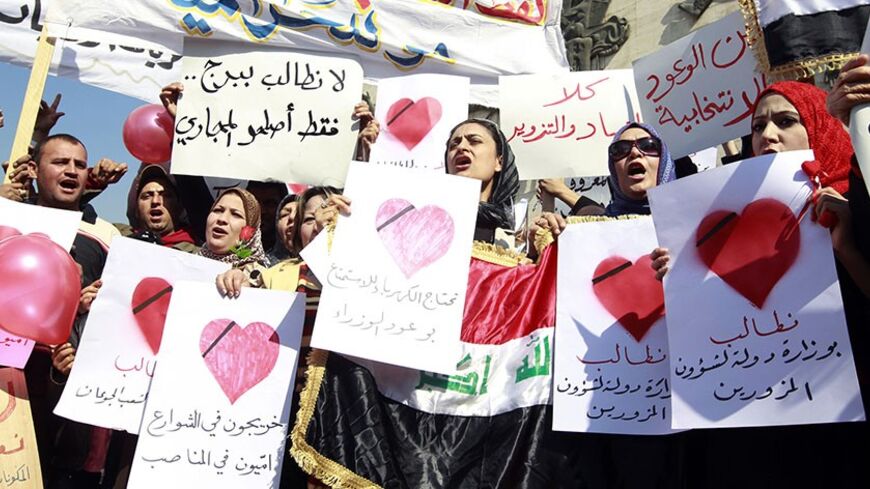 Iraqi youth do not need special occasions for sadness and despair, because their lives are full of that already. Terrorism has haunted the country for more than a decade. A culture of violence and hatred is spreading amid waves of sectarianism, and successive Iraqi governments have done nothing to give the people hope.

In such an atmosphere, Valentine’s Day has become more than an occasion to celebrate and exchange gifts between couples. It has become a symbol of hope, evidence that life goes on, a way to show that love for the homeland and a way to protest against everything that calls for violence and hatred in the country. This day is an expression of the Iraqis’ dreams before 2003, which evaporated over the past 10 years and remain only in memory.

Iraqis did not celebrate the tradition of Valentine’s Day before 2003. They started it in the year after the former regime fell, and it gradually grew. This year, Baghdad and other Iraqi cities saw this phenomenon significantly spread. The color red covered the shops and signs of celebration spread in the streets, alleys and parks.

Since 2011, youth groups have been taking advantage of Valentine’s Day to send a civil message to society and to the Iraqi government.

On Feb. 14, 2011, in Liberation Square in Baghdad, a campaign titled “Love Iraq” started. It was attended by hundreds of young people carrying red hearts and dressed in black to express their grief for the homeland and the will to change. The demonstration has taken place every year since.

Ahmad al-Baghdadi, one of the founders of the Love Iraq campaign, told Al-Monitor that the campaign’s goal has two parts. First, to spread a culture of love in the face of violence, terrorism and sectarianism, in a peaceful and civilized way and by means of change, which depend on a culture of peaceful protest. And second, to try to involve the civil current, intellectuals and democracy advocates in the process to reform the system.

When asked if anyone has harassed them, Baghdadi said that they had faced many obstacles in obtaining official permission for the Feb. 14 demonstration, and they were surprised by the fact that the security forces deployed in the parks where the demonstration was supposed to take place.

Al-Monitor spoke with many young people participating in the demonstration, and they expressed various demands regarding civilian life, including reforming and developing the educational system; fighting corruption in the government and state institutions; and improving services. They all said that all what’s happening in their country — the escalating violence and mismanagement — are the result of a lack of love for the homeland.

This year, social events for Valentine’s Day spread to other Iraqi cities. Young people in the city of Hilla, in Babil province, which lies 100 kilometers (62 miles) from Baghdad, distributed red roses in the streets and public squares to express their love for Iraq and to reject hate, violence and sectarianism.

Various youth groups looked for orphaned children and poor persons in Baghdad and other cities, grouped them into categories and took them to shopping malls to buy them what they needed, then took them to public parks to spend an entire day playing in an atmosphere of love.

Watching the wide range of these spontaneous events by unorganized youth groups raises a question about the role of the Iraqi government in using such opportunities to support these young people to spread the message of love and peace in a country torn by waves of sectarian violence and terrorism.

It is surprising that the various government institutions concerned about the matter — such as the Ministry of Culture, government media institutions and others — are neglecting such events and occasions. Perhaps the surprise disappears when one realizes that the Ministry of Culture is under the supervision of Iraqi Defense Minister Saadoun al-Dulaimi and does not have a fully dedicated culture minister who cares about cultural matters in the country.