Salafists in the Gaza Strip have tried to halt Valentine's Day celebrations, condemning them as a forbidden Christian holiday. 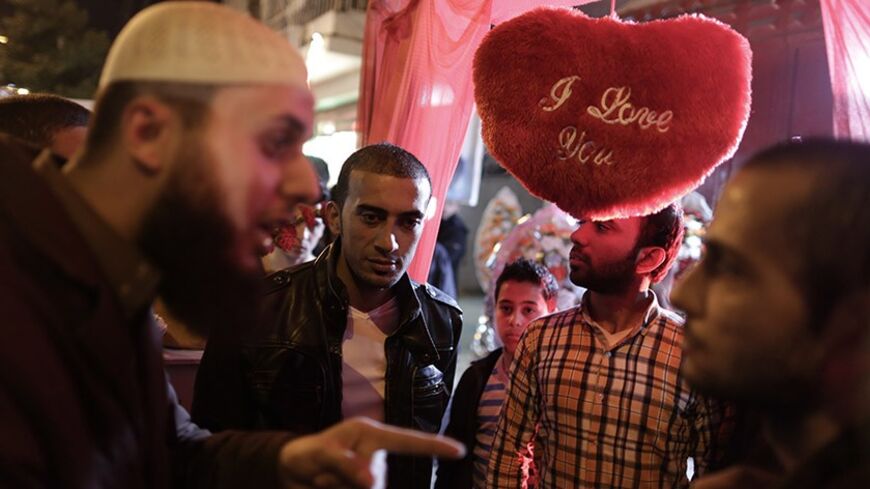 GAZA CITY, Gaza Strip — Gaza resident Maher Annan gave a red carnation to his wife Umm Mahdi, as their four children Nour, Nagam, Mahmoud and Mahdi stood by smiling. This gesture was blasphemous according to the religious speech given by Sheikh Hamada Jabar on the evening of Feb. 13, directed at the owners of shops selling flowers and other gifts on Al-Wahda Street in Gaza City. Each of these shops was preparing in its own way for Valentine's Day.

"God called upon us to love, so how can celebrating love be considered haram?" asked Annan, as he bought a flower from the Crazy Flower shop. Sheikh Jabar stood in front of the shop, which was decorated with red ribbons, preaching to those who had gathered. He told them that Valentine's Day is a forbidden, Christian practice.

Annan, his wife and others were motivated by curiosity to listen to the sheikh, who was surrounded by other Salafist sheikhs. They were carrying banners calling for women to wear the veil and for people to give up smoking and not to celebrate Valentine's Day.

"A single flower is enough for me on Valentine's day. Why must people always focus on the bad side of things?" Umm Mahdi asked Al-Monitor.

A march by a group of Salafist sheikhs belonging to the Ibn Baaz Islamic Charitable Association had started on the evening of Feb. 13 in the Garden of the Unknown Solider. It was part of a campaign against Valentine's Day.

Al-Monitor spoke to Abu Islam, a man wearing the typical Salafist dress that includes a short galabiyya over pants and a white skull cap. He said, "I think that young people celebrate this holiday because of unemployment, or a lack of religious restraint, or someone advising them. Youth should stop imitating the West and focus on the most important things in life."

Abu Islam added, "We call on all officials to fear God when it comes to these people, and to demand [they do what is] right. This march is to advise [the people]. We held a similar march on the Christian New Year's holiday, and advised the people not to celebrate. Muslims only have two holidays, Eid al-Adha and Eid al-Fitr."

Every now and then, the voices of the youth in the crowd surpassed those of Abu Islam, as the microphones the Salafists had brought with them were not working. Some of the young people agreed with them, while others were cynical. Mohammed Qadih, 22, said, "If we aren't working, we haven't gotten married, our future is lost and everything in the country is pushing us [to smoke], how can we not smoke? If love is haram, then they should make the costs of the wedding and the dowries cheap so that we can marry."

"Valentine's Day is haram," said another youth. Addressing those around him, he added, "Love your mother and your father. Do you have to flirt with a girl to know the meaning of love?"

After leaving the Garden of the Unknown Soldier, the march traversed Omar Mukhtar Street, where shops selling red gifts for Valentine's Day are concentrated. The Salafist participants handed out fliers proclaiming that Valentine's Day was forbidden. However, the fliers were printed in red, the color of love. "It was an error of judgment in printing," commented one of the sheikhs.

The owner of the Abu Saeed Falafel Shop refused to take the flier that Abu Islam offered him, asking, "We don't even celebrate this holiday, so why are you distributing these fliers?" Another man working in the shop reached out and took the flier instead. Yet, the vendors taking advantage of the holiday to sell flowers and red teddy bears on the sidewalk didn't pay much attention to the march.

"This is how we make a living. It's the time of year when we can sell, amid widespread unemployment. Give me a job and I'll leave this haram trade," said vendor Wassim, 20.

When the march reached Al-Wahda Street, where there are many flower shops, Omar, 22, said, "These groups and parties celebrate their own occasions and the anniversaries of their founding by spending millions of dollars, yet they criticize the people on this one day of joy and love, amid all this worry and hardship."

Just a few hours before the march, Al-Monitor met with Sheikh Ashraf Sakik, a member of the Ibn Baaz Association's board, at the association's headquarters. He said, "Certainly we are not against love. But we are against the celebration of a Christian holiday. We love our wives and our children, but such holidays promote forbidden relationships."

It seems that Sakik did not know that Valentine's Day was established to promote legitimate marriages, after St. Valentine decided to marry lovers in secret, contrary to the law issued by Roman Emperor Claudius II. The latter had prevented young men from getting married, because he believed that married men would not make competent soldiers. St. Valentine was killed on Feb. 14.

Sakik noted that the anti-Valentine's Day campaign began Feb. 11, when sheikhs went out to the areas where there are flower and gift shops in all the provinces of Gaza where the association has branches. "The campaign concluded Thursday evening, when people were called to the Garden of the Unknown Soldier," he added. Sakik stressed that they completely reject violence and threats, and only support offering good advice and missionary work.

However, it seems some disagree with Sakik. Mohammed, who works at the Safir al-Hub flower shop, told Al-Monitor that a group of Salafists visited the shop on the first day of the campaign. He said, "They entered the shop and said that Valentine's Day is haram, and that we must remove the decorations. While this was a form of advice, they also said they would come back to confirm that we had removed it. But of course we didn't remove it."

Mohammed, who was busy packaging flowers, finding helium balloons and arguing with customers about his prices, said, "We didn't make many sales this season because Valentine's Day fell on a Friday, the day off [in Gaza]. Also, the economic situation is deteriorating, so not many people bought flowers."

At the end of the Salafists' march, they did in fact return to Mohammed's shop. However, the sheikhs contented themselves with standing next to the shop and speaking to cameras and the press.

Islam Shahwan, a spokesman for the Gaza Interior Ministry, categorically denied to Al-Monitor that there was a government decision to ban Valentine's Day celebrations. "No hotel applied for a license to hold a celebration, so we didn't have the chance to agree or disagree," he said, explaining that he had no objection to the Salafists' campaign as long as they didn't infringe on the rights of others.

And thus the Salafist campaign against Valentine's Day ended. But this call for boycotting the holiday did not prevent Ramadan, 23, and his veiled fiancee Haniyah, 18, from sitting together at the Log In Cafe, with its exterior decorated in red, located across from the Garden of the Unknown Soldier. They came to celebrate love and joy together, and they described for Al-Monitor the red gifts they gave each other.