The irony of Valentine’s Day in Turkey

Turkish women are still victims of unacceptable levels of violence, and the treatment of women remains a topic of political manipulation. 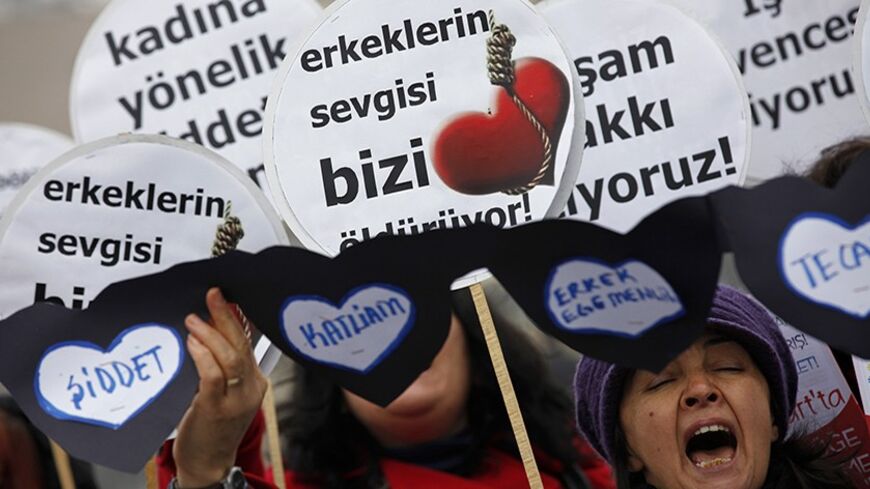 Women holding signs, one of which reads "Men's love is killing us," shout slogans during a protest on Valentine's Day in Istanbul, Feb. 14, 2012. - REUTERS/Murad Sezer

Seda Sayan is a popular Turkish singer turned reality show diva with her debut show at Kanal D titled “Mother-in-law and Bride Come to Seda!” They are surely not without the sons or the husbands, who say the last word. Sayan was inquiring on Feb. 11 about which occasion sons or husbands would consider as more important to celebrate: Mother’s Day or Valentine’s Day. The mothers-in-law were all in favor of Mother’s Day, while the brides chose Valentine’s Day. The brides were on the winning side until that last question, but the sons prioritized Mother’s Day!

The brides, however, made certain that their gifts had been bought weeks in advance and that their husbands were not indifferent about celebrating Valentine’s Day.

Valentine’s Day has somehow entered the social fabric of Turkish society. Even Sadik Yakut, deputy parliament spokesman, opened the session today by celebrating the parliamentarians' Valentine's Day, and hoping for a day of affection for the day's agenda.

It may sound ironic from afar that Turkish men could be so romantic and thoughtful while the statistics on violence against women are ringing alarm bells. The fact is, these are all individual experiences, but Turks culturally consider motherhood as untouchable, the highest honor a woman may earn. And although there might be plenty of bizarre things happening in Turkey, it is unlikely that people would publicly attack a woman with a 6-month-old baby — whether with headscarf or not. That is, however, what Turkish Prime Minister Recep Tayyip Erdogan had contended.

Erdogan said Gezi Park protesters on June 1 attacked on a headscarved woman carrying her baby daughter in a stroller at the Kabatas ferry landing in Istanbul. The allegation was that this woman was surrounded by a large crowd of men who had lost control out of anger for the prime minister, and picked her as a target due to her religious clothing. “They were naked from the waist up, wore leather gloves and bizarre headbands,” she told a Turkish daily on July 13. “They shouted ‘We’re going to hang Erdogan, do you understand?’” She said she fainted out of fear, and when she woke up, she had the heavy smell of urine on her clothes. The baby was untouched.

Erdogan kept on raising this issue in his public remarks over and over again to paint an immoral, inhumane picture of these Gezi Park protesters who were nothing but hate-mongers against pious Muslims. Kanal D, a privately owned television channel, however, put an end to all those allegations on the night of Feb. 13. This television channel broadcast the video recording of this incident from city surveillance cameras, clearly showing that the woman was not touched at all, and she had not experienced anything nasty on that day at the Kabatas ferry landing. Her husband came to pick her up, and they walked away together. The surveillance camera shows that there were two groups of people, however, that passed near her while she was waiting for her husband but they did not interact with the woman — they just passed by.

The ruling Justice and Development Party (AKP) members were also quick to convict the Gezi Park protesters of this unprecedented crime. There could be many things wrong in this country, but to think that secularists would go so much off the hook was unthinkable. Yet, Mehmet Metiner, an AKP deputy, said on June 24, “The Republican People’s Party [CHP] or even the nongovernmental organizations close to the CHP did not make this incident an issue to be concerned about. Trust me, I have watched the recording of that attack, and if our government were not to act responsibly, there could be different reactions, for our society won’t be able to accept such scenes.”

Now the surveillance recordings are out and clearly show that nothing of that nature took place. Erdogan may consider extending an apology to the nation, but specifically to the Gezi Park protesters. Only true believers could understand how wrong it is to lie and defame anyone without being 100% sure. Erdogan, however, is not doing it for the first time. He was also wrong when he said that the Gezi Park protesters drank alcohol in a mosque during the Gezi Park protests. The mosque’s muezzin denied the allegation and he was reassigned out of Istanbul to a new mosque for telling the truth.

Dilan Alp, 17, was hit in the head by a tear gas canister during the May 1 Labor Day celebrations at Taksim Square. Istanbul’s Governor Huseyin Avni Mutlu responded almost instantly that Dilan was carrying a Molotov cocktail in her hand, and that she was a member of a marginal group — suggesting she was a terrorist. The judge ruled on her case on Feb. 10, making it abundantly clear that she only had a bottle of vinegar in her hand (believed to scale down the effects of tear gas) and a wet handkerchief covering her mouth for protection.

In sum, individuals may either celebrate or not celebrate Valentine’s Day, but this day could be another excuse to remind the Islamist-based Erdogan government that it is not only wrong to use women in their efforts to imposing a more religious lifestyle on this society, especially in critical times like the Gezi Park protests, but it is even worse when they’re publicly caught lying about such incidents, where supposedly men urinate on a headscarved women, and she faints out of fear. There could be many wrong things in this country, but this was not one of them. If there is anyone who is giving Turkey a problematic image, the government should not care much about what the people in opposition to its policies say or not, but it should better choose to speak the truth on such critical values. Just as it would be wrong to claim that all Muslims lie, Erdogan should refrain from framing the non-practicing Muslim population in this country as if they had no sense of respect for God.