A distinguished group of US experts on Egypt offers the wrong advice on Egypt. 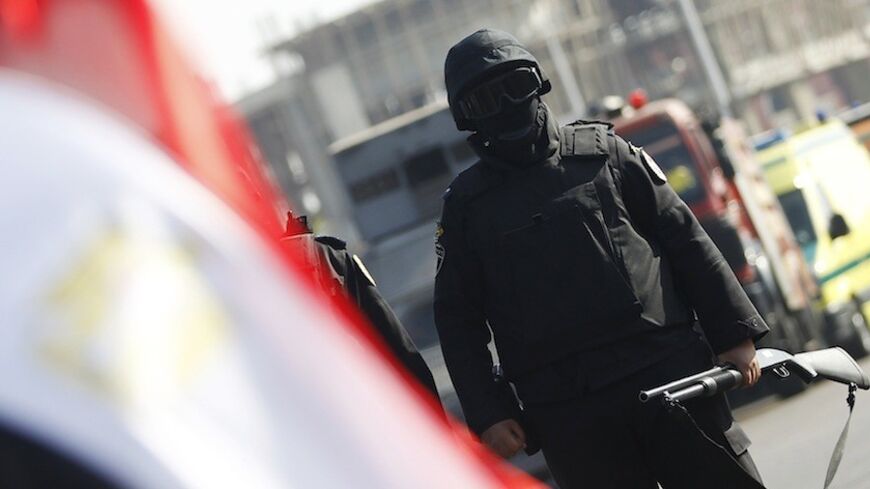 A member of the security forces stands guard near a national flag outside a police academy, where the trial of ousted Egyptian President Mohammed Morsi and members of the Muslim Brotherhood is due to take place, on the outskirts of Cairo, Jan. 28, 2014. - REUTERS/Amr Abdallah Dalsh

The Working Group on Egypt (WGE), a nonpartisan US-based group of scholars and experts on Egypt co-chaired by Michele Dunne of the Carnegie Endowment for International Peace and Robert Kagan of the Brookings Institution, has issued a letter to President Barack Obama warning him against pursuing policies toward Egypt that will “exacerbate persistent instability” in that country.

The letter described what the group saw as frightening repression and concluded that such instability would make it impossible for Egypt to be a reliable security ally for the United States or peace partner for Israel (never mind that Israelis themselves think differently, but what do they know about their own security?). The letter demanded that the president instruct Secretary of State John Kerry not to certify that Egypt has met congressionally mandated conditions on democracy, and to keep aid programs to Egypt suspended as the best way to serve American interests.

The letter, despite citing several facts and many a valid criticism of the interim Egyptian government, fails to see these things in the larger context. If the group looks at the region’s map it will notice that west of Egypt is Libya, where Islamist groups, armed by NATO weapons, are taking over the country and turning it into a militia-state — another Afghanistan — while shipping arms east to their comrades hoping they will destabilize the Egyptian government and cause the state to collapse. In fact, that has been the Muslim Brotherhood’s hope since July 3, and especially during their attempt to divide Cairo through the Rabia al-Adawiya encampment, which turned into an expanding occupation cutting the capital into zones controlled by different factions resembling Beirut in the civil war.

In fact, the Brotherhood had taken measures to bring back, arm and organize thousands of “mujahedeen” and release convicted terrorists from prison throughout the previous months, to use them exactly for this purpose should the Brotherhood fail to control the Egyptian state. On the same map to the east, terrorists were granted a safe haven in Sinai by the Brotherhood during their year of ruling the country, using it as a base to attack military and police targets with full blessing from the organization. More to the east is Hamas, an admitted part of the Muslim Brotherhood and decidedly identified by the United States as a terrorist organization, which had control over some 1,200 illegal tunnels under the Palestinian-Egyptian borders used to sneak in arms, fuel and various goods with custom duties going directly into Hamas leaders’ pockets. Farther east (and to the north) still is Syria, where the Islamic State of Iraq and al-Sham, al-Qaeda and other terrorist groups are declaring their own Islamist emirates, Afghan style.

The idea of granting terrorists, or their allies, control of a country like Egypt, with the rest of the Middle East to follow, in an attempt to pacify them is like giving your arm to a shark hoping it will spare the rest of your body. The Muslim Brotherhood had for at least five decades positioned itself as a non-violent organization. But reality shows several frightening links. Despite its moderate facade promoted by its leaders, the Brotherhood had always preached an extremist ideology to its militant members. The Brotherhood had also maintained close relations with Islamist militant organizations, many of which —including Egyptian Islamic Jihad and al-Qaeda — started as spin-off movements from the Brotherhood itself.

Egyptians, having brought down three regimes and half a dozen governments in three years, are more self-aware of their collective power than ever. Call it crowd democracy or simply public empowerment at unprecedented levels, but the net result was that Egyptians realized that their country was heading toward becoming another Syria, Somalia or Afghanistan, so they decided to prematurely end the Brotherhood’s rule of their country and restart with a new transition.

The interim government could have done a better job on the demonstration law. The police should have been more careful when dealing with some of the students and activists’ demonstrations. Freedom of expression and the right to assemble in peace must be upheld and safeguarded. After all, Egyptians have risen in the millions once and again since January 2011 to assert these rights and freedoms. But surely rights must be exercised with a pinch of responsibility. The Egyptian populace, and not the government, decided that a few anarchists could not be allowed to bring their country down in an experiment to fulfill the prophecies of some communist book they or some of their friends once read or misread.

Strategic government installations, including those belonging to the Ministry of Interior and Ministry of Defense, have been surrounded by high walls and barbed wire since 2011. These protective measures are defensive in nature and reflect the desire to avoid confrontations with protesters at all costs. It is true that most of the protesters are peaceful and unarmed. But there are always a few armed ones who mingle among them and start catapulting Molotov cocktails at these installations while others fire shotguns and even sometimes live ammunition at Central Security Forces police formations that are often armed only with batons. Egyptians have watched these scenes over and over with patience, hoping that some sense will finally prevail.

The Working Group on Egypt assumes that the Egyptian government is harsh and repressive. But does it realize that most Egyptians have often accused the interim government and its predecessors of being too soft and indecisive when standing up to those trying to drag their country to chaos and anarchy?

The interim government in Egypt could be accused of many things. But the explosive belt around Egypt of countries collapsing and failing under Islamist militant attacks is not something of its own doing. If this or future governments manage to hold on to Egypt and cause that wave of anarcho-Islamist terrorists to be reversed, it should be applauded and supported. The United States may have seen a glimpse of terrorism horrors in 9/11, Iraq and Afghanistan. But adding a failed Egypt to the equation would change everything. Egypt has often been the first piece triggering the start of that domino effect in all directions. After all, in the middle of the Middle East’s map lies Egypt.

The idea of stimulating “creative chaos” to reshape the Middle East’s region may initially sound harmless to someone living in Washington, D.C., where the deafening violent street battles are thousands of miles away and as a result are scarcely heard. But having Afghanistan multiplied by 50 while stretching from Pakistan to the Atlantic will surely have repercussions felt on the other shores of that ocean and around the world. You can safely, or unsafely, kiss regional order and security goodbye. With so much of the oil reserves, markets and strategic routes concentrated in the area, global stability would be disastrously affected.

Western analysts always assumed, wrongly so, that Islamists would thrive because the people liked them. But when more than 20 million Egyptians go to the polls, 98.1% of whom voted for the constitution, in effect saying “No to terrorism,” the WGE is not thrilled. It sees this as a sign of repression. It amazingly assumes that the empowered Egyptian public suddenly is subdued by repression. But how can anyone be repressed into voting? When Egyptians thought that Mubarak’s regime was rigging elections, they simply wouldn’t show up. On the other hand, women dancing publicly in the streets after voting while taking friendly photos with army soldiers guarding polling stations were not dancing or camera-posing out of repression or fear, but out of love for their country, joy and hope that it might, just might, be saved from the hands of terrorists. Egyptians are not under any illusions; they know that their country is still in grave risk. But they believe that at least for now, they are marching away from the abyss. The WGE does not seem happy to see that. In fact, many Egyptians had soberly realized that Egypt might be facing a civil war should Morsi be removed. But that was the best of two evils.

The Working Group on Egypt is not only missing the magnitude of the challenges which the country has miraculously so far endured, but may also seem oblivious of the consequences of allowing terrorists to win the day. Finally, the idea of using US aid to Egypt to pressure Egyptians at this level of high public empowerment is unlikely to serve US interests. The aid amount is less than 0.5% of the country’s GDP and as a result could not generate critical leverage. The aid package is mostly composed of “discount vouchers” redeemable only from US military industrial corporations and as a result further suspension will hurt both sides and could send the Egyptian army shopping in China and Russia. This is one time where the WGE seems to be missing both the forest and the trees.