The remilitarization of the Syrian conflict as sophisticated weapons are sent to opposition forces means more violence, including the return of fighting to areas that have achieved cease-fires. 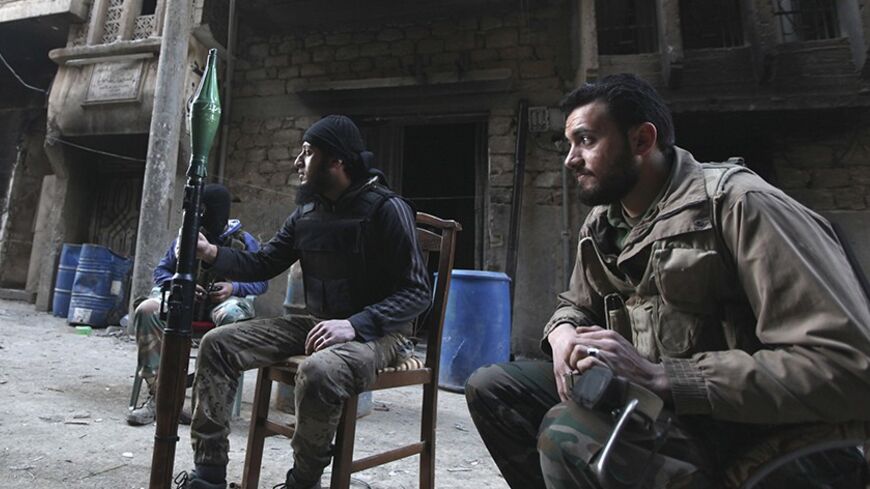 ALEPPO, Syria — As the Geneva II conference came to a close without an agreement on a much-vaunted transitional government, the drums of war began to beat louder. There is now talk among the backers of the Syrian opposition of arming vetted rebel factions with sophisticated weapons, including shoulder-launched anti-tank and anti-aircraft missiles. The Russians have also suggested that the United States and France are planning limited military strikes in the south to reignite the stalemated Daraa front. The aim of all this is seemingly to restore the military balance on the ground after steady gains by regime forces. In such a complex and unpredictable conflict, however, such a strategy could easily backfire.

The overall goal of military pressure on the Syrian regime of President Bashar al-Assad is to force it to make concessions and to improve the opposition’s hand in future negotiations, though not to allow the rebels an outright military victory. Such a victory by either side is next to impossible short of a campaign on the scale of that in Libya. Thus, yet again, the specter is raised of the timeless but paradoxical “bombing for peace” scenario, or so it would appear. This delicate balancing act of just enough force to alter the regime’s calculus, but not so much as to topple the state and create a void filled by radicals and extremists, is prone to a myriad of dangers. The United States and its European and Gulf allies’ track record in the Syrian conflict has so far been less than impressive, and there is no reason to suggest that their confused meddling will improve matters this time around.

First, there is no guarantee that sophisticated weapons will not fall into the wrong hands, meaning of course those that might at one point use them against their former benefactors or Syria’s neighbors or even farther afield. It is not like there is no precedent.

Late last year, the Salafist Ahrar al-Sham forcibly seized the warehouses of the Free Syrian Army near the Bab al-Hawa border gate and got their hands on state-of-the-art British- and American-supplied hardware. There is no shortage of unscrupulous rebel commanders who would sell such weapons, even if acquired by other means, to well-financed extremists to make a small fortune.

In short, the risk is a repeat of the Afghan scenario, in which the mujahideen turned against their Western backers after ousting the Soviets, leading to the rise of extremist groups like the Taliban and al-Qaeda. Of course there is no shortage of extremist groups, including al-Qaeda, in Syria, and all of them, with the exception of the Islamic State of Iraq and al-Sham, are allied with the rebels seeking to topple Assad’s regime.

The other major risk is reigniting the areas that have already implemented stable cease-fires and a return to some semblance of normality, mainly around Damascus, including the Yarmouk Camp, Qaboun, Barzeh and Babila, which produced some extraordinary images of regime and rebel soldiers laughing together, a sight that many Syrians were ecstatic to see. Escalating dormant conflict zones and exacerbating others will only add to the catastrophic refugee crisis that has gripped Syria and threatens to destabilize its neighbors. As revealed in Al-Monitor by Barbara Slavin, many Aleppans are disenchanted with all sides fighting in the war, but will nonetheless bear the brunt of any escalation. The penchant for certain rebel groups to use heavy weaponry against regime-controlled civilian areas, especially in Damascus and Aleppo, means that a fresh supply of arms will likely see shells falling on people’s houses.

The reaction of both sides in the latest round of sabre rattling has been predictable. Maher, a junior officer in a branch of the Syrian security forces, told Al-Monitor, “They’ve been arming those terrorists for three years now. What difference would new weapons make?” He went on to say, “They see their puppets in Syria losing, and they think more weapons can make them win, but they will only destroy more of Syria before they are crushed.” Abu Saleh, a rebel in the eastern rebel-held part of Aleppo, offered a contrasting view, telling Al-Monitor, “We need these new weapons. Then we can at least stop the barrel bombs from falling and the jets from bombing us, but I don’t think they will give them to us. They always promise but never deliver.”

Abu Saleh makes a valid point. The campaign of barrel bombing Aleppo has recently greatly intensified. As the regime advances into the strategic Sheikh Najar industrial zone to the east of the city, with its sights set on the Castello road to the north, a siege of the rebel-held east seems imminent, and a repeat of the scenarios from Homs or Damascus is quite likely. The barrel bombing seems designed to drive as many residents out as possible, and it has so far proven successful. Large swathes of east Aleppo are now almost entirely deserted, except for rebel fighters, including the historic old city, which is slowly being reduced to rubble by regime air strikes and rebel detonation of underground tunnels. It would seem the regime has dropped any pretense of trying to win the hearts and minds of the residents of rebel-held areas, opting instead to drive them out by force and lay claim to their territory.

The Aleppo exodus has seen the bulk of the population displaced to nearby rural towns or across the border to Turkey, which has experienced an unprecedented torrent of refugees in the last week alone, straining resources in border towns and refugee camps to the breaking point. Some have sought sanctuary in regime-held areas, but the majority has chosen to flee elsewhere, fearing persecution and arrest by regime forces. Indeed, many are wanted for colluding with the rebels, and the regime keeps careful tabs on its enemies across the front lines. Those who brave crossing into regime territory face intense scrutiny and frequent ID checks, not to mention house-to-house searches carried out on all buildings where the displaced have sought shelter, the pretense being to search for weapons caches and sleeper cells.

It would not be an exaggeration to say that Syria is once again at a vital crossroads in its three-year-long conflict. The paths of diplomacy and war seem to irreconcilably diverge, and the stakes for the nation, its people and indeed the whole region are very high indeed. What is needed is a rational, cool-headed approach, not a headlong rush into risky and ill-conceived escalation.