Land swaps reportedly proposed by Israel leave Palestinians with the short end of the stick. 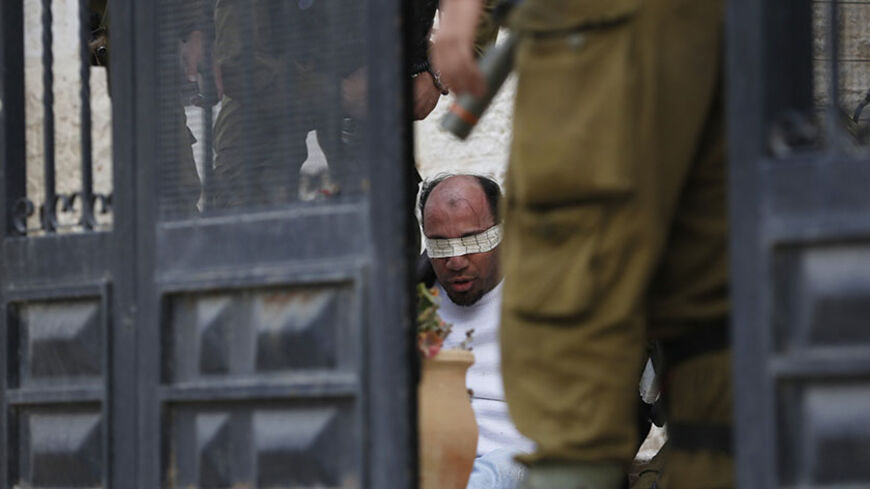 Israeli soldiers stand next to a Palestinian man they detained during clashes with stone-throwing protesters at a weekly demonstration against the West Bank Jewish settlement of Beit El, in Jalazoun refugee camp, Feb. 14, 2014. - REUTERS/Mohamad Torokman

The current Palestinian-Israeli peace talks, planned to last nine months, have one month left to produce a peace treaty. Palestinian officials are on record as refusing to extend the talks, while the Israelis are sending clear messages that they want the talks to be extended. In a statement made to the official Palestinian news agency WAFA, the presidential spokesman outlined two issues that the Palestinians have a problem with.

"We will not accept a Palestinian state without East Jerusalem as its capital. We will not recognize Israel as a Jewish state," Nabil Abu Rdeineh, the official spokesperson of Palestinian President Mahmoud Abbas, was quoted as saying.

While Abu Rdeineh highlighted these two hot button issues, a more serious discussion is going on behind the scenes about the issue of land swaps. Ever since the Camp David II summit, while Palestinians have consistently called for the 1967 borders to be the perimeter of their state, Abbas and late Palestinian leader Yasser Arafat both publicly and privately have accepted the idea of land swaps.

However, Palestinians have consistently stressed that any land swap must be equal in size and quality. The London-based Al-Quds Al-Arabi translated an Israeli report saying that the major disagreement between Palestinian and Israeli negotiators is the size and quality of the swap. According to this report, the gap between the two sides is huge. Israel wishes to annex nearly 10% of the West Bank, while Palestinians are open to a much smaller 3%. The Israeli report, originally published on the Hebrew-language website Walla News, says that the percentage is derived from the calls by Israeli Prime Minister Benjamin Netanyahu to include the Hebron and Beit El settlements. In January, AFP picked up an interview from Israeli radio in which Netanyahu said Israel would like to annex 13% of the West Bank. All these figures exclude Jerusalem.

The issue of Israeli desires to keep the settlement of Beit El, which is a stone’s throw from the Muqata in Ramallah, came up in the recent speech by Abbas to 300 Israeli students.

One of the areas where the two sides have a major difference is the future of the Israeli settlement of Ariel, a city of more than 20,000 Israeli settlers, deep in Palestinian territory. The report published in Walla states that US Secretary of State John Kerry is opposed to Ariel being included in the land swap because it divides the northern part of the West Bank. The United States and the international community have been consistently calling for a Palestinian state that is contiguous.

The discussion about land swaps and borders has been further highlighted by the recent decision of the Kerry-led peace team to add Israeli-American analyst David Makovsky. The former director of the Project on the Middle East Peace Process at the pro-Israel Washington Institute is well known for designing maps that support hawkish Israeli views of where the two-state solution's borders should be.

While Israel has been publicly boasting about the areas in the West Bank it wishes to annex, partly in order to quiet some of the settler opposition, it is less known what land plots Israel is willing to give the Palestinians. The controversial idea of turning over to the Palestinians some highly populated Israeli town in the Galilee triangle area made by far-right Foreign Minister Avigdor Liberman was never taken seriously and disappeared from the discussion once Liberman decided to take on a more moderate tone. The only references to other potential areas include empty plots of Israeli land near the Gaza Strip and some north of the West Bank near Jenin. These plots don’t fit the Palestinian criteria of quality, nor are the suggested areas large enough to meet the size criteria.

The issue of the land swaps will certainly not be resolved within the time remaining in the peace talks, which have less than 40 days to go. Israeli and US attempts to extend the talks will not deter Palestinian leaders from joining international agencies such as the International Criminal Court at The Hague unless some sweeteners are made available.

Palestinian sources told Al-Monitor that unless Israel agrees to a further release of longtime prisoners and a change in the status of areas under Israeli-run Area C to Palestinian-run Area A, Ramallah is unlikely to accept an extension. Palestinians are also insisting that an Israeli settlement freeze must also be included, at least in areas that are going to be part of the state of Palestine. The problem will be distinguishing the areas that will apply without agreement on the land swaps.