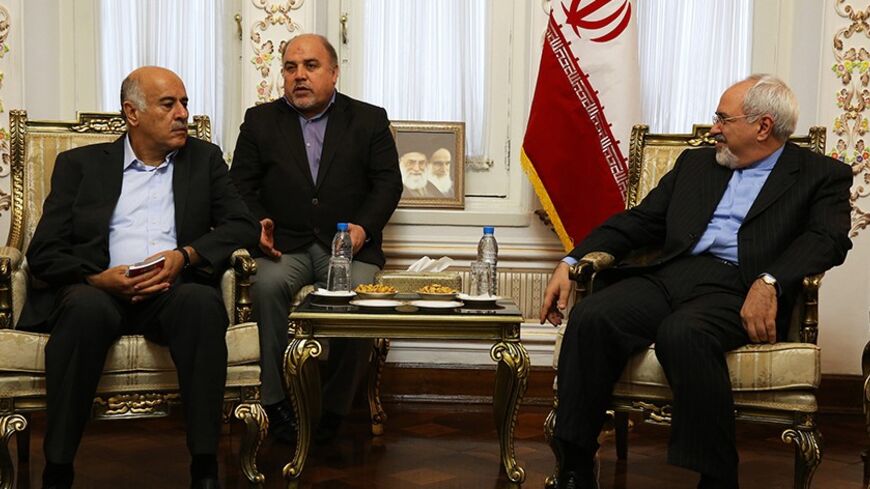 When Iranian Foreign Minister Mohammad Javad Zarif told a German TV network that Iran would support Palestinians in whatever position they take, he was not making a new policy. Successive Iranian officials have made similar pronouncements. However, Zarif's statement had a ring of credibility to it. After all, Zarif and his boss President Hassan Rouhani have been moderating Iran’s foreign policy in line with what they promised the Iranian electorate last year.

However, today, Iran’s relations with Hamas have deteriorated after the Islamist movement, which was based in Damascus, turned against President Bashar al-Assad and publicly supported the opposition.

The Iranian-Palestinian relationship has fluctuated over the years. The PLO was awarded the building that once housed the Israeli Embassy to Iran after the 1979 Islamic Revolution as a symbolic gesture of support to Palestinians from the new power in Tehran. Relations with Iran, however, soured in recent years as Iran threw its financial and military weight behind Hamas, allowing it to survive financially after forcefully taking over power in the Gaza Strip.

Both Ramallah and Tehran could gain from a warming up of relations. Palestinians trying to improve their negotiating position would be able to count on a strong regional power to bolster their strategic standing. The PLO could also use Iran’s influence to resolve the ongoing dispute with Hamas, which has lost most of its foreign sponsors. On the other hand, Iran, which is trying to improve its relationship with the West and overcome Western officials' worries regarding its nuclear program, might see another opportunity to further demonstrate its moderation by improving ties with Abbas.

Despite these obvious advantages, the PLO is apparently in no big hurry to improve relations with Tehran. Juggling sensitive US-led peace talks while being largely dependent on Saudi funding, the Ramallah-based Palestinian leadership can’t afford to be seen as getting too close to Iran.

A source within the Fatah leadership in Ramallah told Al-Monitor that their leadership is not in favor of developing this strategic association any further. “We are spinning our wheels as far as our relations with Iran are concerned,” said a senior Fatah official. The source said that the visit to Iran is being explained as a private visit so as not to anger the Americans and Saudis.

Zaki, a former Palestinian ambassador to Lebanon who is in charge of Fatah’s Arab and Islamic relations, said that he plans to attend the upcoming Iranian National Day celebrations in Amman due to take place on Feb. 10.

The Rajoub visit, which no doubt was carried out with the blessing — if not the initiative — of Abbas coincides with an increase in visits to Arab and foreign capitals by Palestinian envoys. The latest visit by senior Palestinian leaders from Ramallah to Damascus demonstrates that the PLO leadership has plenty of clout outside its headquarters in Ramallah. The talk within Palestinian leadership circles in the past weeks has focused on options and alternatives. What are the options available to the leadership if the US-initiated talks fail? Does Abbas have enough alternatives to turn to if the Palestinians are offered ideas that the Palestinian people would not accept?

The Palestinian leadership wants to ensure that Abbas is not forced to accept a bad deal simply because he has no other alternative. Fatah sources indicate that Abbas is under a lot of internal pressure not to extend the April deadline without a serious peace offer that Palestinians can live with. Fatah officials do not want to wait until the last moment and be put in a bind in which accepting a bad deal is a problem and rejecting one would cause long-term damage.

Senior Fatah leaders told Al-Monitor that the Rajoub visit took place now to alleviate the pressure within the Fatah Central Committee on Abbas for credible alternatives to the peace talks, especially with the April deadline approaching.

It is unlikely for the present time that Fatah-Iranian relations will considerably improve. For now, it appears that the Palestinian leadership wants to keep Iran as an option that it can turn to if the current peace talks do not produce any results. During his stay in Iran, Rajoub made that point quite clear by hinting that Palestinians have three options if the peace talks fail, insisting that the “option of resistance is still on the table.”