In an interview with Al-Monitor, ultra-Orthodox strategic expert Itzik Sudri claims that the ultra-Orthodox should be integrated as more active partners to the diplomatic process, considering their politically moderate worldview. 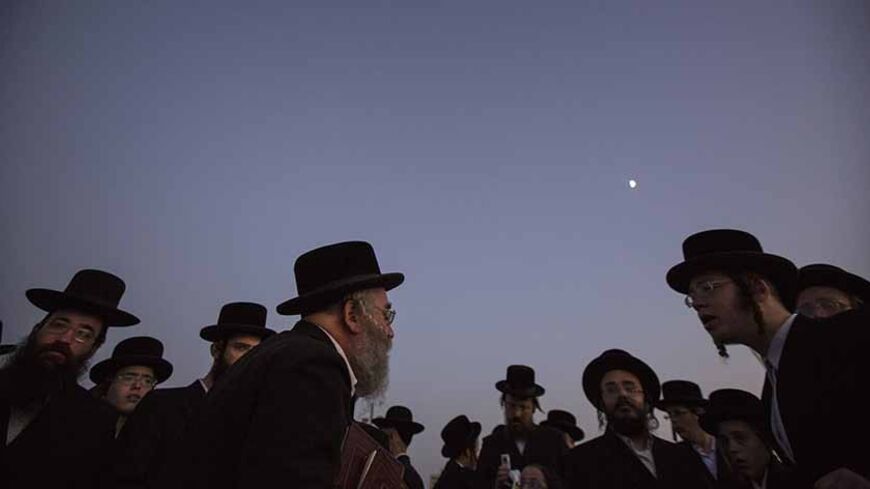 Ultra-Orthodox Jewish men take part in the Tashlich ritual near the shore of the Mediterranean Sea in Ashdod, Sept. 12, 2013. - REUTERS/Amir Cohen

The group of ultra-Orthodox women who entered the parliament building in Belfast, Northern Ireland, last December, immediately drew the attention of everyone in the reception compound. Waiting for the guests from Israel was an elegant table covered with all sorts of glatt kosher offerings, supervised by the rabbi of the city and served with disposable utensils.

Among the women was Esther Atias, wife of former Minister Ariel Atias, who is one of the heads of the ultra-Orthodox Shas Party; Adina Bar Shalom, daughter of the late spiritual leader of Shas Rabbi Ovadia Yosef; and Tzipi Lau, wife of Israel's Chief Rabbi David Lau. The group featured more women — wives of other senior Shas leaders — all of whom preferred to keep a low profile in their visit to Northern Ireland. They were joined at the dinner by local parliamentarians. During their visit, the women also met with the mayor of Belfast, former members of the Irish underground and victims of the bloody “Troubles” that tore the country apart.

The visit was organized by the United Nations as part of a project led by nongovernmental organization InterPeace to expose public opinion shapers in ultra-Orthodox society in Israel to the Palestinian-Israeli conflict. The women, all of whom are considered leaders in the ultra-Orthodox community, were carefully selected to attend a master's program in “conflict management and resolution,” in cooperation with Ben Gurion University and the ultra-Orthodox college in Jerusalem, and sponsored by the UN. They went to Ireland to learn about its model for resolving a bloody national conflict.

The organizer of the event, who accompanied the visit, was former Shas spokesman Itzik Sudri, who now works as a strategic consultant. Sudri is also the brother of Yehudit Yosef, Rabbi Ovadia Yosef’s daughter-in-law. He believes in the two-state solution and signed the Geneva Initiative to resolve the conflict with the Palestinians. Over the past few years, he has become a kind of “activist in promoting peace initiatives” in ultra-Orthodox society. He has been managing the project for the UN and InterPeace since 2005, based on the assumption that the ultra-Orthodox in Israel are the key to achieving a political-diplomatic solution to the conflict.

Over the past few months, with the diplomatic negotiations under the patronage of US Secretary of State John Kerry making progress, Sudri has been called in for more and more background talks with the heads of the European and US diplomatic community in Israel, including many ambassadors. They all want to know how the ultra-Orthodox will respond if there is a diplomatic compromise on the table, understanding that while they may be in the opposition in the current Knesset, no agreement will pass without ultra-Orthodox support. Sudri serves as a personal adviser on ultra-Orthodox affairs to these officials.

At these meetings, Sudri likes to talk about how — when he joined the Geneva Initiative in 2003 together with attorney David Glass, who was particularly close to Yosef — they were the odd men out in the organization. While on a flight to Geneva to attend the signing of the virtual agreement between former Minister Yossi Beilin and former Palestinian Minister Yasser Abed-Rabbo, Sudri was the only one on board to wear a black ultra-Orthodox skullcap. In many ultra-Orthodox communities, the two men were deemed “traitors,” and Yosef was called on to disassociate himself from them. According to Sudri, the rabbi rejected these pleas. If the agreement brings an end to the bloodshed, he said, then there is no problem with it. According to Sudri, this story shows that Yosef’s worldview was much more moderate than the right-wing path his party took.

Al-Monitor: Is that true even though the ultra-Orthodox are now in the opposition?

Sudri: They are the deciding voice. The voice of the halachic [religious law adjudicator] religious leadership must be heard in any peace agreements, since the agreement will have significant religious components to it, like the fate of the holy sites. Only the ultra-Orthodox leadership can determine that.

The UN’s project with the ultra-Orthodox began because research indicated that entire sectors of Israeli society have been left out or were excluded from the dialogue about peace, including the Israeli Arabs and the ultra-Orthodox. When I joined the project, I quickly learned the issue does not interest most of the ultra-Orthodox. Their attitudes range from apathy to the remarkable discovery that very senior figures in the ultra-Orthodox leadership have simply said that they would prefer the conflict not be resolved, because if it is, the government will be free to deal with civil affairs regarding state and religion, and harass them as a minority.

Al-Monitor: Have you managed to convince them that it is important?

Sudri: It’s a process. More and more ultra-Orthodox Jews are joining our projects. There are already a few hundred alumni of our courses at the Ono Academic College, in which we enable them to become more familiar with the conflict, its roots and its implications. They tour the borders, meet with military officers and experts, and study English. Some of them went on tours of Ireland.

By the way, when I told Rabbi Ovadia Yosef about the project, he said to me, “Sages increase peace in the world.” [Babylonian Talmud Berakhot 64]

Al-Monitor: How do you know that it is having an impact on the ultra-Orthodox street?

According to every demographic report published recently, the ultra-Orthodox are the group that has grown more and is more influential. International bodies involved in issues surrounding the conflict now realize that they have ignored this very influential group for decades, especially that with time it keeps growing.

Al-Monitor: What interests the European diplomats whom you have been meeting with in Israel?

Sudri: They want to know what the ultra-Orthodox position is. The world doesn’t distinguish between an ultra-Orthodox Jew and a settler. They both wear a skullcap, and they are both considered to be on the extreme right. The fact is, however, that the differences between these two groups are enormous. Today, the most important ambassadors in Israel ask to meet so that they can get to know the ultra-Orthodox political leaders from up close. They actually visit the most influential rabbis in their courts. They ask them questions and take interest in their opinions. They are now starting to realize that the ultra-Orthodox are not an obstacle to peace but the key to peace.

Al-Monitor: Could the partition of Jerusalem pass among the ultra-Orthodox?

Sudri: The issue of Jerusalem is a clear example why the ultra-Orthodox must be part of resolving the conflict, because only they can bring the best religious solution — as Jerusalem is a religious issue. The classic ultra-Orthodox approach is that Israeli jurisdiction does not make a place any more or less holy. By the way, in focus groups that we’ve tested we discovered that even if an ultra-Orthodox Jew adheres to a particular ideology, if his rabbi tells him differently, he will do what the rabbi has said.

Al-Monitor: In what way do you think the peace process has missed out the most with regard to the ultra-Orthodox?

Sudri: The peace camp has been talking to itself for the past 40 years and hasn’t tried to expand its circles.