Jews could be welcomed in future Palestinian state

Jews could be welcome in a future Palestinian state, but this is a separate matter from accepting Israeli settlements. 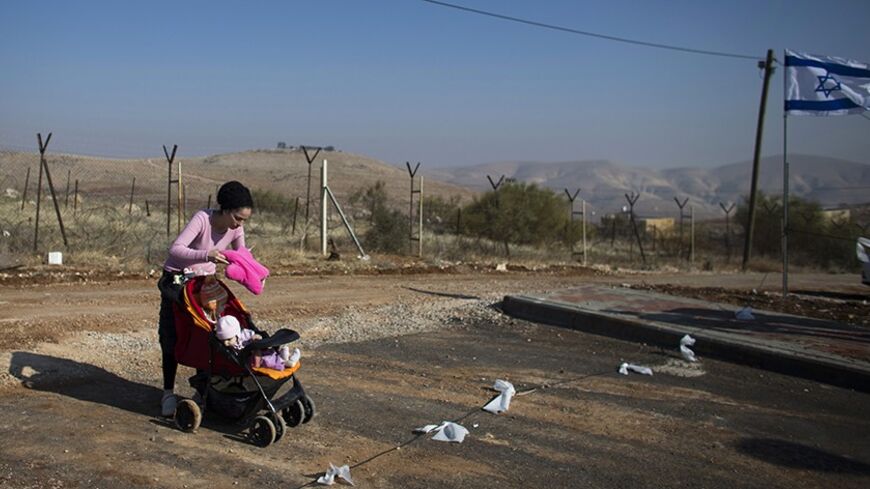 A Jewish settler with a baby in a stroller attends a dedication ceremony for a new neighborhood in the Jewish settlement Gitit in the Jordan Valley, Jan. 2, 2014. - REUTERS/Ronen Zvulun

When Israeli Prime Minister Benjamin Netanyahu initially suggested the possibility of Jewish settlers to remain citizens of the Palestinian state, it was not clear whether this was a bluff or a serious proposal. While Palestinian negotiators were quick to reject the idea, it was members of the Israeli cabinet themselves who revealed the true intention of Netanyahu’s proposal.

The main idea behind this apparent trial balloon was to expose what Israelis consider a racist Palestinian position of not wanting any Israeli to stay in the state of Palestine after the possible Israeli withdrawal. Evoking 20th century anti-Semitism and Jewish-free communities in Europe, Netanyahu wanted to paint the picture of the demands by Abbas that all illegal Israeli settlers must leave as anti-Semitic.

Irrespective of the motivation behind this apparent Israeli bluff, there stand two harsh facts that have been rarely discussed.

Settlements built with force by Israel in the occupied territories are illegal.

The Fourth Geneva Convention  was added to other conventions that make up today’s humanitarian law in outlawing Israeli settlements in occupied areas.

Furthermore, when asked, the International Court of Justice confirmed this illegality regarding settlements, including the Israeli wall that is built deep into Palestinian territory. The court in The Hague reaffirmed that occupying powers are not allowed to take property or move their people to areas under occupation.

Also, the idea of Judenrein, a term created by Nazis to refer to areas “cleansed of Jews,” has no practical application in this regard unless one equates the term Jewish with Israeli. When Palestinian leaders rejected the presence of settlers in Palestine, they are not saying that no Jews can live in Palestine, but that no illegal settlers from the occupying power can do so.

Palestinian political literature makes the difference quite clear. In practice, the PLO’s leading faction, Fatah, elected in its 2009 congress a Jew, Uri Davis, into the Revolutionary Council, its highest body.

This Israeli attempt to mold Jewish and Israeli into one is perhaps one more reason why Palestinians are opposed to Israeli demands that Palestinians recognize Israel as the homeland of the Jewish people.

But despite the politics of the issue, the idea of Israelis or Jews living in the future Palestinian state is not totally rejected by Palestinians. Those who accept the idea insist that it cannot be seen as legitimizing illegal settlements and accepting de facto land confiscation. Nor should Israelis or Jews living in Palestine be given any special privileges over and above all other citizens.

Former Palestinian Prime Minister Salam Fayyad has publicly said that there is no principled reason why Jews or Israelis cannot live in an independent state, as long as they abide by Palestinian laws.

True, Palestinian leaders who opposed Zionist ideology that allowed Jews anywhere in the world to emigrate to Palestine were vague as to which Jews would be allowed to live in this secular state. But the concept of a multireligious state of Palestine has always been part of the historic Palestinian narrative.

Palestinians favoring the one-state solution, in which Israeli Jews would be citizens in a single state between the Jordan River and the Mediterranean Sea, would certainly accept this eventuality.

If this eventuality happens, it would require some emotional breakthroughs and a welcoming environment. The anger and rejection of such an idea means that a much deeper and more courageous reconciliation process will be required to heal the decades of pain.

Some Palestinians have suggested a South African-style truth and reconciliation commission might be needed if indeed some Israeli settlers who have directly or indirectly caused harm to Palestinians would be permitted to continue to live in a future state of Palestine.

The idea of occupiers living in a Palestinian state draws raw anger from many sides. Netanyahu might have thrown this trial balloon as part of his own negotiating tactic. The issue, however, is serious. Palestinians must think through and try to see if they can find a national consensus on it.