Poverty rates on the rise in Iraq

The security crisis in Anbar and the crisis in governance have contributed to a declining Iraqi economy. 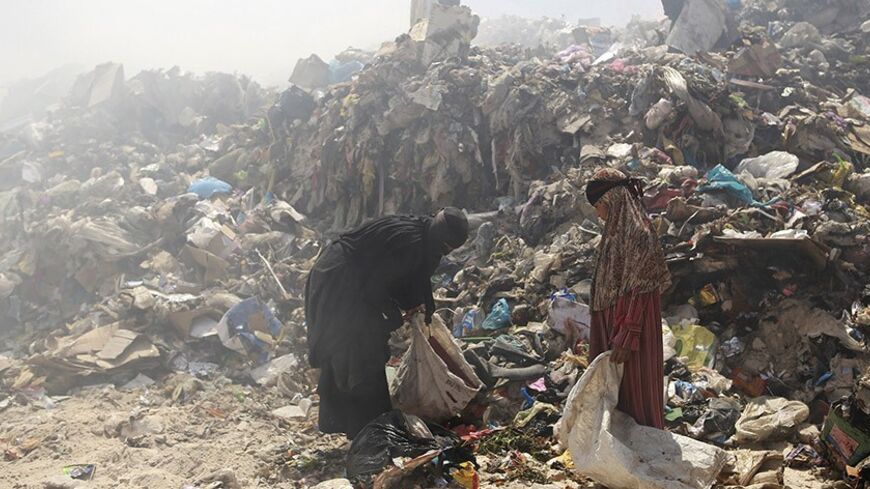 People collect garbage to be sorted and sold to nearby recycling centers in a district near Najaf, south of Baghdad, April 30, 2013. - REUTERS/Ahmed Mousa

Iraq has been struggling with an increase in poverty rates for many years. While the Iraqi Ministry of Planning notes that the rate of poverty has recently decreased, reaching 11%, statistics released by the World Bank show that 28% of Iraqi families live below the poverty line. In the event that the country may face any kind of crisis, this rate could increase by 70%. This is currently happening because of the spike in violent acts and tense political situation.

The head of the Model Iraqi Women Organization, Athraa Hassani, provided Al-Monitor with this information, quoting World Bank officials who discussed these statistics during a meeting in Turkey with a number of members of civil society organizations seeking to find a solution to the poverty crisis in Iraq.

Hassani questions the accuracy of the poverty rates announced by the Iraqi government, affirming that these rates are continuously increasing because of a rise in daily violence and spike in unemployment rates in addition to a weakening of the Iraqi economy.

Based on the World Bank’s figures, this would mean that out of Iraq’s 34.7 million citizens, more than 9.5 million individuals are living below the poverty line.

Governor of Baghdad Ali al-Tamimi told Al-Monitor that the Iraqi government is not able to provide genuine solutions to deal with the poverty crisis in the country. Its role is limited to doling out a monthly salary for the poor, ranging between $40 and $100 depending on the number of family members. This amount is disbursed every three months; however, it does not even meet the daily needs of families. Tamimi affirmed that poverty rates are very high, and that whoever says otherwise knows nothing about the situation of Iraqi society. Tamimi, like Hassani, objects to the attempt of some governmental sources to deceive the public regarding poverty rates in Iraq and the resulting risks.

Speaking to Al-Monitor, Ali Shir, a member of the parliamentary Human Rights Committee, did not deny the fact that the poverty rate in Iraq is very high and that thousands of families feed on “garbage and live in landfills and slums.” He attributed this situation to the fact that the Iraqi government is channeling more focus to other issues, mainly the security situation and armament. This comes at the expense of social plights that are exacerbating by the day.

Hassani argues that the ideal solution involves cooperating with various organizations to put in place a new social security law for the unemployed. This law must comprise all social groups that are unable to work for one reason or another. In fact, a draft law on this subject was prepared and presented to parliament for ratification. According to the draft law, one-third of the state’s budget should be allocated to provide fixed monthly salaries for the groups specified in the law.

Al-Monitor visited many slums and poor neighborhoods such as the Safar and Husainiyah neighborhoods in Sadr City. While these neighborhoods are located within the borders of the capital to the north and northeast, they do not have water or electricity services. Roads are unpaved and houses are built with blocks that are covered with brittle tinplate fixed to the roofs with weights to keep them in place.

Al-Monitor interviewed some of the residents who said that they were living a miserable life and rely on wealthy donors to meet their basic needs. They addressed the government asking, “Until when will we tolerate the situation? We as well as our children are hungry.”

The families with whom Al-Monitor met made it clear that they are not optimistic about their situation and that of the country in general.