The Iraqi government has refused to back plans by civil society associations to open shelters for battered women, claiming that women would use them to leave their husbands, and this would threaten many Iraqi families. 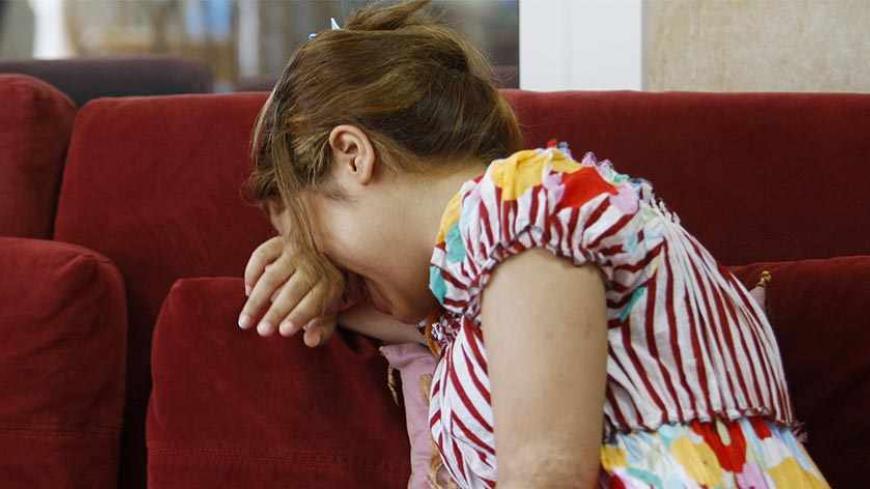 A victim of human trafficking from Iraq, 14, laughs while speaking at a shelter for women and children, Abu Dhabi, May 31, 2011. - REUTERS/Jumana El Heloueh

"Living in a jungle ruled by men." This is how Dahaa al-Rawi, the chair of the Women's Committee in the local Baghdad government, described the status of women in Iraq. Women are marginalized and their abilities unrecognized — domestically, socially and politically. Women are subjected to violence of all forms and murder on an ongoing basis.

"We do not have any statistics about the status of women, or the daily violence that they are subjected to," Rawi said, adding, "In Baghdad's local government council, they view us as merely a secondary committee that does not play an important role."

Speaking to Al-Monitor, Rawi said that the same also applies to Iraq's state institutions and ministries concerned with statistics or women's issues. None of them have accurate data showing the extent of violence against women in Iraq.

In an attempt to obtain figures showing the depth of the problem, Al-Monitor spoke with Dr. Marwa Mohammed, who works at Al-Yarmouk Hospital in Baghdad. According to Mohammed, Al-Yarmouk's emergency room receives an average of two cases per day of women who have been beaten by their husbands or another family member.

"The most dangerous cases we receive are pregnant women who have been severely beaten. This exposes them to the risk of miscarriage," Mohammed added. She noted that in most cases the beatings cause internal bleeding, which leaves bruises that need a long time to heal.

Baghdad alone has 46 governmental hospitals, while the rest of Iraq’s provinces have more than 200, according to statistics from the Ministry of Health. Mohammed thought that other hospitals might receive battered women at rates similar to that of Al-Yarmouk.

Al-Monitor met with many activists in women's organizations to discuss violence against women, including Hanaa Edwar, the head of the Al-Amal Association, Suhaila Alaasm of the Iraqi Women's League and Athraa al-Hassani, the head of the Model Iraqi Woman Organization.

All of them noted that dozens of women have been killed by their husbands or other male relatives in horrible ways for not wearing the veil or over doubts concerning their morality. For example, if a woman speaks on the phone late at night and her family does not know whom she is calling, this could raise suspicion. Even today, most women in Shiite areas of Baghdad do not dare to go out on the streets without wearing the veil and a black abaya. This applies to all Iraqi provinces, and is increasingly severe in villages and rural areas, where honor killings are on the rise.

They also noted that violence against women is continuously on the rise, due to the cultural decline of society and its return to tribalism. This comes as a result of the weakness of the rule of law in light of the security and political turmoil in Iraq, and given that battered women are unable to talk about the violence they face.

Hassani told Al-Monitor that for years, a number of civil-society organizations have called for opening shelters for women who are beaten or receive death threats from relatives for various reasons. According to Hassani, their numbers are in the thousands.

However, Hassani added, "These demands were rejected by the government," and expressed her regret that even the Ministry of Women refused their calls. According to her, the reason for this is the "illusion that women are governed by tribal customs and norms that they cannot escape." If women turn to these shelters — if they were to open — they would be pursued by their families, because this act would be considered a source of shame for her family and her husband's family.

Al-Monitor spoke with Leila Abdullah, a women's rights activist who supervises one such shelter in Sulaimaniyah. She said that her shelter has succeeded in helping 780 battered women via social workers and legal professionals hired by the shelter.

Abdullah said that the shelter currently houses 13 women and two young girls, all of whom have been subjected to domestic violence. Some of them were raped and threatened with death by relatives, while others were beaten harshly and repeatedly. Still others were forced to marry men who were much older than them.

Haifa al-Hilfi, the head of the Iraqi parliament's Committee for Women and the Family, spoke to Al-Monitor about the reasons why the government refused to grant legal permits to civil-society organizations to open shelters for battered women. She said, "There is a fear that if these shelters are opened, many women will use them to leave their families." She described this as a "real risk that would threaten many Iraqi families."

Perhaps Hilfi's statement is an implicit recognition of the extent of domestic violence against women in Iraq.

According to Hilfi, the solution to addressing violence against women in Iraq lies in intensifying efforts among clergy, politicians and decision-makers to provide education and religious sermons on this topic. Hilfi also proposed establishing centers linked to the Ministry of Women to accommodate battered women and alleviate the violence they face.