Palestinians in Iraq protesting to have their rights restored

Displaced Palestinians in Iraq who live in very poor conditions have joined the protests in Baghdad, demanding their rights as refugees who have lived in the country for decades. 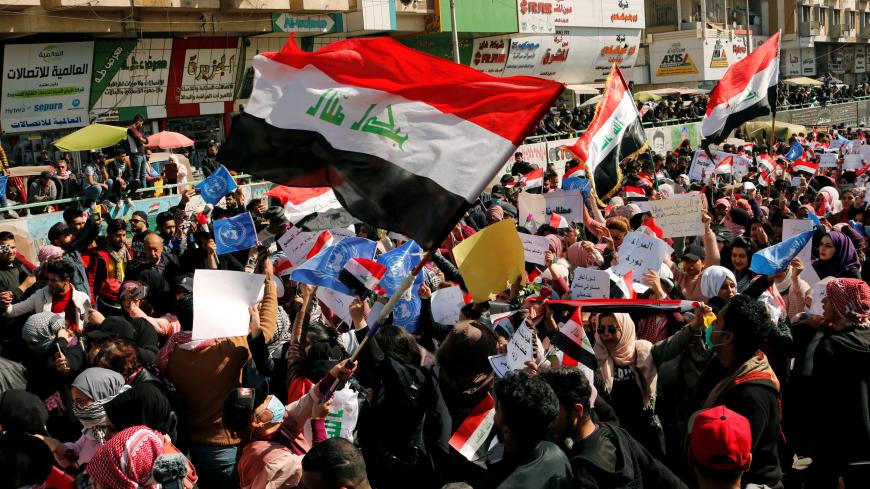 Palestinians living in Iraq have taken to Tahrir Square in Baghdad alongside Iraqi demonstrators to fight for their rights as refugees. The United Nations High Commissioner for Refugees (UNHCR) decided Feb. 11 to stop paying housing allowances for nearly 30 Palestinian households in Iraq, adding to their suffering.

That decision follows one about a month ago that halted those benefits for 300 families.

To these Palestinians, their priorities right now eclipse headlines about the so-called deal of the century that has inflamed the Gaza Strip and West Bank.

Ali al-Tamimi, a legal expert and former judge, told Al-Monitor, “The Palestinians in Iraq could not care less about Baghdad’s Jan. 29 statement that underscored its support for the establishment of an independent Palestinian state with Jerusalem as a capital and its opposition to [Washington’s peace plan] to settle the Middle East conflict.”

Tamimi, who handles lawsuits for Palestinians to restore their rights before the Iraqi judiciary, said, "The Palestinians in Iraq perceive such statements as mere political slogans that they take no interest in.” He added, “This is because they feel that the laws in force in Iraq pose a threat to their lives."

Al-Monitor learned from a source at the Palestinian Embassy in Baghdad who asked to remain anonymous that “there are contacts to urgently obtain Iraqi authorities’ support when it comes to [restarting] the allowances and to initiate talks to have the rights of Iraqi Palestinians restored, as was the case prior to the fall of Saddam Hussein's regime in 2003 under Iraqi Law No. 202."

That law, which touched on the fate of 4,000 Palestinian refugees residing in Baghdad, Erbil and Mosul, stated that Palestinians were to be treated as equals to Iraqis. The Iraqi government abolished the law in 2017.

Speaking to Al-Monitor, Nabil Samara, a Palestinian activist involved in organizing Palestinian demonstrations in Tahrir Square, explained, “The Palestinians primarily suffer from unemployment and poor living standards. This is not to mention they are not eligible for government employment under Iraqi law. The housing problem has always been the biggest reason for the many households to [leave Iraq].

Samara added, “Since the Saddam Hussein regime was ousted in 2003, the Iraqi government has not kept the promises made to Palestinian President Mahmoud Abbas. … On the contrary, Iraqi authorities withheld food ration cards and cut welfare salaries. Also, the wives of [late] Palestinian employees were denied their pensions.”

He affirmed that prejudice continues to be a problem for Palestinians, as some Iraqis blame them for backing Saddam, who supported the Palestinians' cause and granted them certain privileges.

Samara revealed he had contacted the Palestinian Embassy in Baghdad, which told him Iraqi officials have met with the ambassador, who is working to reverse the decisions made against Palestinians. "The promises, however, have not been kept," he said, adding, "The UNHCR's decision to stop paying housing allowances is political and simultaneous with Washington’s peace plan.”

Iraqi journalist Hadi Jalu Merei wrote a Feb. 9 article about the Palestinian refugees’ conditions in Iraq after he scouted their areas. He wrote that Iraq risks “losing a minority that has been present there for decades.”

Merei told Al-Monitor Palestinian families are frustrated with the embassy over the "lack of a decision that would protect Palestinians from the dangers in Iraq.”

Hundreds of Palestinian families fled to Jordan in the aftermath of the US invasion of Iraq in 2003. The Iraqi Embassy in Amman has refrained from renewing their travel documents or issuing such documents for infants.

The problem is seemingly a political matter rather than a humanitarian one, judging by some statements of the political elite. In April, the Israeli Foreign Ministry applauded former Iraqi parliament member Mithal al-Alusi’s remarks that he was not ready to sell out his people's chance for a relationship with Israel for the sake of the Palestinian cause. "Let [the Palestinians] sort this out themselves,” he told Iraq's Asia TV.

Furthermore, Iraqi parliament member Alia Nassif in September called for Palestinians in the West Bank to take down the statue of Hussein that was erected in 2017 in Qalqilya.

Wissam Mesbah Shaaban, a Palestinian activist and an administrator of the Facebook page Iraq’s Palestinians, told Al-Monitor, "There are dozens of Palestinians charged with terrorism in Iraqi prisons. Their statements are obtained under torture.”

He added, “This has prompted the Palestinians in Iraq to seek a third country in which to resettle. Some of the widows and disabled have already been resettled in the United Kingdom.”

Ali al-Albayati, a member of the Iraqi High Commission for Human Rights, told Al-Monitor, "A great deal of injustice was done to the Palestinians in Iraq; most notable is that the apartments accommodating them in Baghdad’s Habibiya district were seized [during fighting after the US invasion]. That forced the UNHCR to accommodate them in the camps of Haifa, in Baladiyat, in coordination with the Ministry of Displacement and Migration.” He added, “The Palestinian families whose housing allowances were cut will continue to set up tents in Baghdad’s Tahrir Square until their demands are met.”

Nevertheless, the responsibility for finding a solution to Palestinian refugees' problems doesn't fall only on Iraq. UN agencies and the Palestinian government must help coordinate and develop agreements that will lead to legislation to guarantee a secure future for the new Palestinian generation abroad.

by Murielle KASPRZAK and Joseph SCHMID | AFP | May 26, 2022
END_OF_DOCUMENT_TOKEN_TO_BE_REPLACED