Iraq has decided to repatriate some of the Jewish historical documents found in Baghdad after the fall of the Saddam Hussein regime, while others will go on international display, providing a window for the world into Iraq’s cultural heritage. 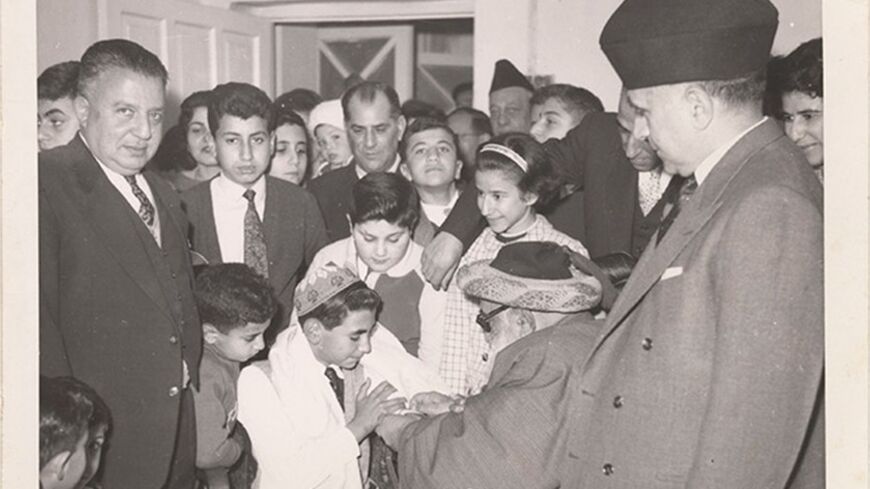 A photograph from the Jewish Archive showing a bar mitzvah in Baghdad, 1960. - Maurice Shohet/National Archives

The artifacts and important manuscripts that are today known as “the Jewish Archive” had been lying — for dozens of years — away from the public eye in a basement inside the headquarters of the Iraqi intelligence services, in storage conditions that do not meet international standards. This had caused many of the documents to be damaged.

It was not until 2003 that this case became controversial. These artifacts could have been burned or totally destroyed without people knowing that they even existed in the basement.

Apart from religious considerations, the problem does not lie in Iraq's right of possession of its own historical legacy. Possessing this legacy is Iraq’s inherent right, given the objective and historical circumstances.

However, we should remember that we are talking about a historical legacy. These are significant documents that are very important to scientific and historic research, which would be a treasure to research centers. Some nations have exclusive rights to their historical legacy. However, this does not allow them to conceal this legacy and prevent people from having access to it.

The issue of the Jewish Archive, regardless of the political debate surrounding it, ought to be addressed within the framework of a satisfactory solution for all those interested in intellectual heritage. This is especially true because the heritage of mankind is common heritage.

It is worth recalling the demolition of the Buddhist statues and relics in Afghanistan at the hands of the Taliban in 2001, which was seen as a stab inflicted on humanity as a whole. This was not only related to Buddhists themselves. Perhaps Muslims were more saddened than others at these demolitions, in light of this uncivilized behavior that does not resemble them in any way.

In this context, I would like to refer to the US National Archives and Records Administration, which retains the Jewish Archive today. After restoring the documents, the administration revealed the archive to researchers and interested parties from all over the world in November 2013.

I was struck by the statements made by Iraqi ambassador to Washington, Lukman Faily, on Nov. 7, 2013. Faily proposed a cooperation mechanism, according to which Iraq preserves its right of ownership of the archive, in return for cooperation to permanently solve the problem.

In brief, the idea put forward by the Iraqi ambassador is for Iraq to re-collect some of the artifacts, while the rest will be temporarily lent for exhibitions and to introduce the culture of the Iraqi Jews, which opens a great door on Iraq to the world.

We ought to recall that international relics are usually displayed in many different exhibitions and museums across the world through bilateral or group cooperation among two or more states.

Confirming Iraq’s ownership of the Jewish Archive is necessary. However, humanity has the right to be introduced to and study this archive, which has been hidden by the Iraqi authorities from the public eye for dozens of years. This right should also be guaranteed.

by Murielle KASPRZAK and Joseph SCHMID | AFP | May 26, 2022
END_OF_DOCUMENT_TOKEN_TO_BE_REPLACED