In light of the mass exodus of Christians from Iraq following the 2003 war, the government has initiated steps to teach Christian religious studies and the Syriac language in some public schools. 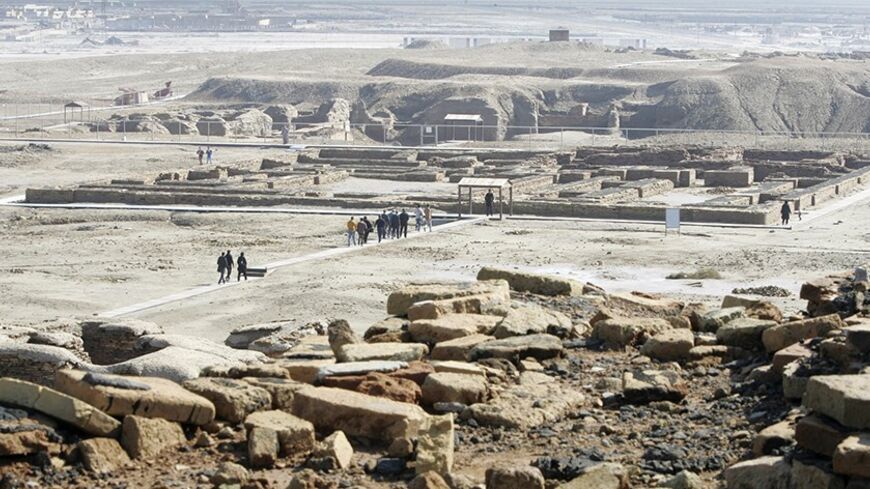 Iraqi Christians on a spiritual pilgrimage to the birthplace of biblical patriarch Abraham visit the ruins of Ur near Nasiriyah in southern Dhi Qar province, Nov. 22, 2013. - REUTERS/Essam Al-Sudani

Over the past 11 years, the Christian population in Iraq has decreased by more than 75%. It started to decline gradually after 2003, following the overall rise in violence and attacks targeting Christians. Before 2003, there were around 1.5 million Christians in Iraq, and according to recent church figures, only 300,000 remain.

Perhaps this drastic difference pushed administrators in charge of education to find ways to preserve Christianity’s cultural and religious heritage in Iraq. Christianity is a major component of Iraqi society, and it would be incredibly negligent to allow it to disappear, under any circumstances.

Emad Salem Jeju, director general of the Syriac Study Directorate, spoke with Al-Monitor about the Ministry of Education's decision to include Syriac and Christian religious education in the curricula of 152 public schools in the provinces of Baghdad, Ninevah and Kirkuk. The goal is to preserve the Syriac language, the mother tongue of all Christian denominations, so the schools were selected based on these areas' large Christian populations.

According to Jeju, the schools selected enroll a total of 20,500 students. In addition to teaching Syriac, they also offer Christian religious education. Jeju said that a committee of the Council of Catholic Bishops of Iraq has been working on developing a new curriculum for Christian religious education that will be issued next year. The schools are currently using the same curriculum as schools in the Iraqi Kurdistan Region.

On Aug. 16, 2011, the Iraqi parliament had declared the opening of the General Directorate of Syriac Culture and Art. It represented the launch of several activities geared toward reviving the Syriac language. Although parliament’s decision could be considered a bit late, the Kurdistan Regional Government had already taken such a step in the 1990s; many Christians viewed it as a real gain and opportunity to further their civilization in the country.

Among those who praised the decision is Enlil Issac Yako, a teacher at the Erdan Basic Syriac School in the province of Dahuk. Following the decision, he wrote on the official website of the Assyrian Democratic Movement (Zowaa): “This decision represents a national gain, because the language is at the basis of every nation, along with the land, people, religion, culture, customs and traditions. This is an important step, because our people today are facing the repercussions of the current phase, in an attempt to prove their existence and national identity in the lands of their ancestors, as they are a genuine and ancient component of the country’s civilization.”

Implementation of the decision faces a number of obstacles, however. Many Christian families do not speak the Syriac language fluently, especially in the city of Mosul, according to Athena Baba Younathan, assistant director of the Alf-Farah Elementary School, which is affiliated with the Christian Orthodox community in Iraq. Younathan told Al-Monitor that because so many Syriac and Chaldean families do not speak the Syriac language, they had been reluctant to have their children study in Syriac at school. The students, however, have had no problems studying in the language, she added.