As disputes between Iraq and the West seem to be on the rise, Baghdad is refocusing its efforts on the “East,” in particular Russia, China and Iran. 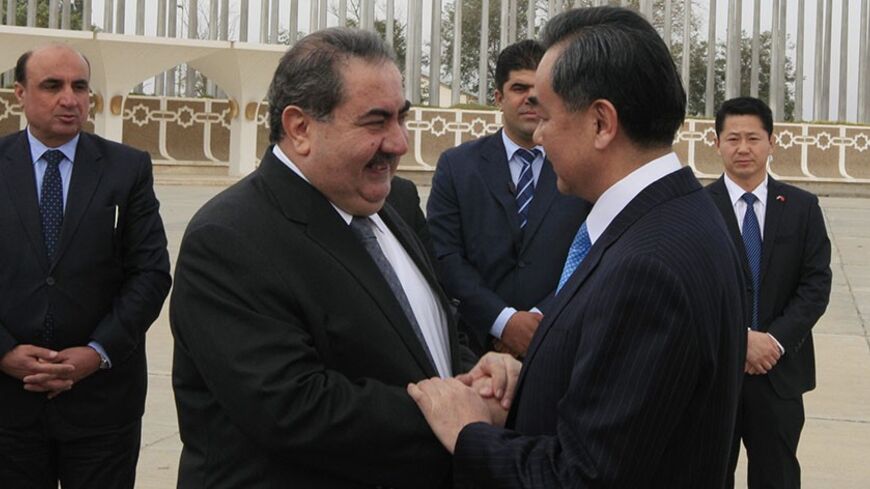 Shortly after Russian Foreign Minister Sergey Lavrov left Baghdad last month, Chinese Foreign Minister Wang Yi visited on Feb. 23. These two visits seem to be the culmination of Iraq's path toward opening up to the East, which is embodied by growing political and economic relations with three key "Eastern" countries: Iran, Russia and China.

Less than two years ago, there was a near consensus among observers that Iraq lacked a unified foreign policy, because of deep internal divisions that made it difficult for its competing ethnic and sectarian parties to agree on a clear vision for the identity of the country and its foreign role. Consequently, according to this view, Iraq could not embrace a defined foreign policy without resolving its internal conflicts, and specifically could not identify a national identity that would help it define its geographic and cultural horizons and its foreign project.

It does not appear that there has been a drastic change today, but there are what can be considered features of the emergence of a foreign policy adopted by the Baghdad government. This policy goes against what some expected after the fall of former President Saddam Hussein, since it is not based on an alliance with the West. What's more, it can be said that Iraq might be gradually heading back toward the "East," and the visits by the two Russian and Chinese officials can be placed within this context. Historically, the first radical change in Iraq's foreign policy approaches came after the fall of the Iraqi monarchy in 1958. This is the same year the diplomatic relations were established between Baghdad and Beijing and relations resumed between Baghdad and Moscow. Since then, Iraq's foreign policy has been heading toward the East, while its rupture with the West has deepened.

China and Russia's economic policymakers are rediscovering Iraq again. China considers the country to be an important trade partner in the region. The value of trade exchange between the two countries in 2012 amounted to more than $17 billion, and Beijing is one of the largest investors in the Iraqi oil and energy sectors. Meanwhile, trade relations between Iraq and Russia have been improving since 2009, when Russian oil producer Lukoil resumed its investment in the West Qurna oil field. Iraq once again began buying Russian weapons, and armaments cooperation was one of the most important topics of Lavrov's most recent visit to Baghdad.

Of course, this does not mean that Iraq has abandoned its relations with the United States. The recent visits by senior Iraq officials such as Prime Minister Nouri al-Maliki, Speaker Osama al-Nujaifi and Deputy Prime Minister Saleh al-Mutlaq to Washington indicate that the US still plays an important role in guiding the concerns of Iraqi politicians. Furthermore, the recently signed arms deals between Iraq and the US give the impression that strategic cooperation is ongoing between the two sides, especially regarding counterterrorism coordination. However, the two sides have largely different views about critical issues such as the Syrian crisis and Iran. Furthermore, there is a difference in the way Iraqi leaders view Washington, compared with how they view Moscow and Beijing. Washington is still a point of competition between these politicians, and they all focus on directing their relations toward Washington to serve their own internal political agendas. Yet these politicians do not view Moscow and Beijing in the same way. The latter two states deal with Iraq based on a purely pragmatic rationale, the primary focus of which is economic interests.

This trend toward the East reflects the internal developments that have occurred in Iraq since the withdrawal of US troops. The conflict over power in Baghdad was settled largely in the favor of Shiite Islamic forces. Maliki succeeded in consolidating his power and controlling the major joints of decision-making in the country. Maliki no longer needs to consult with his internal rivals to determine foreign policy approaches. Rather, today he seeks to take advantage of his foreign relations to strengthen his internal influence. In this regard, the third "Eastern" force — i.e., Iran — has a very vital role.

Al-Monitor spoke with Emma Sky, a former political adviser to the US military in Iraq who currently serves as a senior fellow at Yale University. "This shift toward the East began in 2010, when Iran — not the United States — succeeded in guaranteeing a second term for Prime Minister Maliki," she said. Since that time, it seems that Maliki's success in consolidating power has coincided with a growth in Iraqi-Iranian relations.

The Syrian crisis played a crucial role in promoting this trend. For the first time, the Iraqi government found itself in conflict with the United States regarding a sensitive regional issue that had an impact on the internal situation in Iraq. Although the Iraqi government has not taken a direct position in support of the regime of President Bashar al-Assad, it is not on friendly terms with the Syrian opposition that is backed by the West, or with the armed groups that have become active in Syria. In short, Iraq's position on the Syrian crisis was closer to the Iranian stance than to that of the United States. And perhaps this played a role in stimulating cooperation between Iraq and Russia, whose foreign minister confirmed his country's support for Iraq in confronting terrorism, which has grown against the backdrop of the conflict in Syria.

Relations between Baghdad and Ankara have deteriorated because of the Syrian issue, and because Baghdad considers the government of Prime Minister Recep Tayyip Erdogan to be supporting the Iraqi Kurdistan region in its conflict with Baghdad over oil exports and other issues. This has led to a greater Iraqi dependence on Iran, to counterbalance Erdogan’s regional ambitions. At a time when it seems that trade relations with Turkey are decreasing, their levels between Iraq and Iran have been increasing, reaching more than $12 billion in 2013. Moreover, there are reports indicating that Iran wants to fill the void that may occur if trade and economic relations between Ankara and Baghdad deteriorate. Besides the political and economic dimensions, religious, cultural and tourism-related ties between Iraq and Iran are the best they've been since the founding of the modern Iraqi state.

The growing ties between Iraq and Iran were confirmed by the latest reports that Iraq violated international sanctions by signing a deal to buy arms and ammunition from Iran, which caused the US administration to raise concerns publicly. The Iraqi Ministry of Defense denied these reports in a statement published on its website. The first reaction by the Iraqi government came from Ali Al-Mussawi, Maliki’s media adviser, who did not confirm these reports but asserted that there is nothing preventing his government from buying arms from any party.

Iraq directing itself toward the East does not reflect a national policy with a strategic dimension. Rather, it indicates the extent of the relationship between internal conflicts and external relations in the country. Things will remain this way until these conflicts give rise to a more permanent structure for authority, including clearer conceptions of national interests and national identity.