After Acre blast, fears of vigilantism

Following an alleged act of sabotage that led to the explosion of a residential building, killing five, the city of Acre is trying to keep one of Israel’s most important tourist destinations calm. 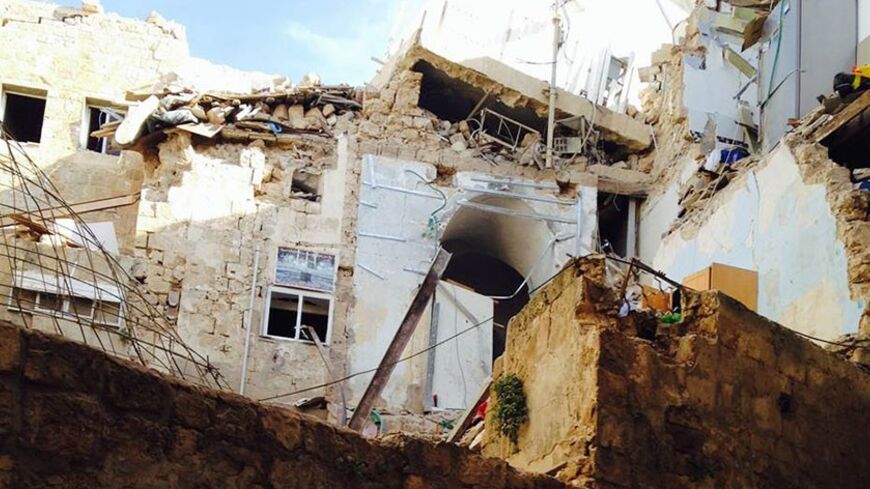 A residential building collapsed after an act of sabotage in the Old City of Acre, Feb. 21, 2014. - Daniel Ben Simon

ACRE, Israel — It’s been a week since tragedy struck on Feb. 17, and Acre residents are struggling to get their lives back on track. The explosion that rocked the city, killing five people, was apparently an act of sabotage and not an accident. In the first few days after the incident, everyone still believed that the building in the Old City collapsed when some gas canisters inside exploded.

On Feb. 18, it was determined that the explosion was caused by people who came in the middle of the night to attack the cell phone tower set up in the building. Investigators concluded that three local young people had climbed to the top of the building and placed an explosive charge next to the tower, hoping to destroy it. The charge went off prematurely and caused the entire building to collapse, burying its residents. It took hours for rescue teams to extricate four bodies. The body of a 5-year-old boy was found later on in the ruins.

On Feb. 21, I went to see the scene of the incident with my own eyes. The three-story building had disappeared as if the ground had swallowed it up. The floors had collapsed on top of each other, creating a huge hole in the ground. Police closed off the area and prevented both local residents and any curious onlookers from approaching the scene out of concern that whatever was left of the building might collapse further. Part of the third floor — the remains of a kitchen in one of the apartments — was still hanging precariously in the air. The tall cell tower still jutted out of the ruins, undestroyed but quite likely no longer operational.

The story apparently dates back to when one of the top-floor unit owners agreed to put the tower on the roof of the building for a monthly payment from a cellular company. Rumors started spreading throughout the Old City that anyone who approached the tower would get seriously ill. Local businessman Husam Ajuj told me that he knew the residents of the building well, and that they were all convinced that they would come down with cancer from the radiation emitted by the tower.

“I asked them,” he told me. “Do you have any proof that the tower causes cancer? They told me that people had been dying for no reason over the past few years, and that they are certain that it was the cell tower that caused them to die.”

The residents were so convinced that the tower was at fault that they appealed to Acre municipal officials to have it removed. In their despair, they went to the home of former Knesset member Sheikh Abas Zkoor, a leader of the town’s Muslim community, and pleaded with him to remove the tower before they get cancer or some other deadly disease.

Zkoor told Al-Monitor that he "called the tenant to a meeting,” adding: “I asked him why he didn’t remove the tower from the building, and he told me that he makes a living from it. He gets a few thousand shekels a month for having it stand on the roof of the building. He swore to me that the whole story about people getting sick is nonsense.”

Once they gave up on having the tower officially removed, a few tenants came to the conclusion that they would have to do it themselves. They contacted local activists willing to work in explosives and offered them the job of getting rid of the tower for a fee. Last Sunday, shortly after midnight, an explosion shook the entire Old City of Acre. Their bomb exploded unexpectedly, causing the gas canisters at the site to explode. The combined force of all the explosions caused the rickety old building to collapse on its inhabitants. The three "explosives experts" were badly hurt. They are currently hospitalized at the Nahariya medical center along with other wounded people who had woken to find themselves on the ground floor.

I walked through the bustling market of Acre’s Old City with Zkoor. The merchants all asked how he was doing and how he plans to handle the incident. Ever since the cause of the explosion became known, the city has been wracked with unrest and fear that vengeance will be forthcoming. The families of the victims, mourning in the central mosque of the Old City, expect that those responsible will be punished. The police are on the alert for vigilantism, and so is Zkoor.

“I won’t let it happen,” he said. “It’s a difficult task. I expect the police to arrest those responsible and to put them in prison. The residents expect me to restore calm, and what is most important to me is that there is no chain reaction by residents seeking vengeance.”

Ajuj is convinced that any acts of vengeance will not only set the Old City on fire, but have implications far beyond its walls. He said, “Everyone will suffer because of this. Acre’s big advantage is that it's a safe city. There is no fear for the safety of any Jew who comes to shop in the market. The merchants all know that the slightest risk could chase away the visitors, and their lives would be ruined. So it's in everyone’s interest to keep things calm. Local residents want the police to do their job, so that life can get back on track.”

The police have posted guards on the resident who owned the cell tower. His life has been in danger ever since the incident, and he wanders through the city very little these days. The police have given him an emergency call button that he can use to summon rescue forces in the event that he is attacked. Last Friday, the market was packed. A local restaurant owner said that luckily for him, the explosion didn’t scare off any tourists. It left no fear in its wake.

“We live off of tourism, both from overseas and from Israelis from across the country,” he said. “If, God forbid, something bad happens and they start to feel that the place is dangerous, it will impact all of us. Suddenly we’ll find that there is no traffic, that everything is dead. Thank God everything is okay. The explosion had no impact.”

There’s the same feeling of business as usual at Said’s restaurant in the Old City. The restaurant was packed at noon last Friday. His hummus has won him fans all across the country, and many of them start heading to his restaurant as early as 6 am. “Thank God everything is okay,” said Ahmed, one of the restaurant workers. Zkoor is convinced that Acre will manage to overcome the whole incident without an impact on local commerce.

“People here know exactly what lies in the balance,” he added. “That’s why I’m calm.”