Landlords and residents in the Gaza Strip are reluctant to live next to families who were targeted by Israel in the recent war, fearing they may also become targets in any future confrontation. 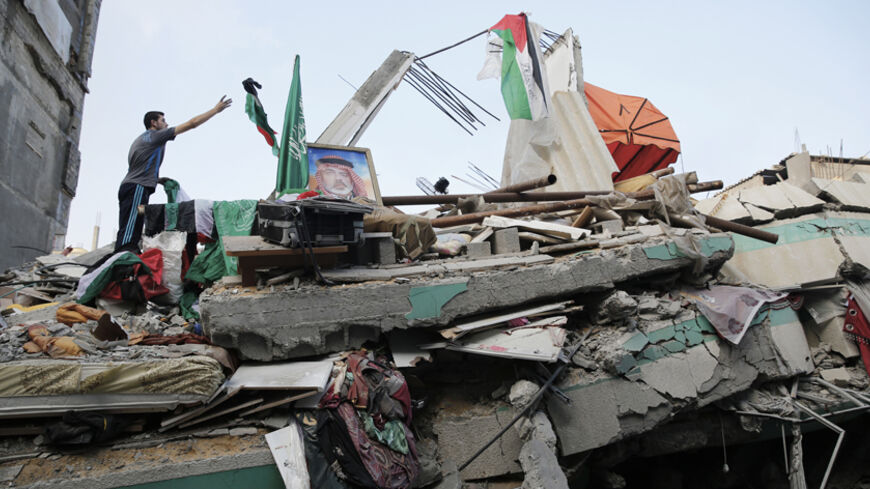 A Palestinian man throws a flag atop the rubble of Hamas leader Ismail Haniyeh's house, which Gaza's Interior Ministry said was hit by a missile fired by Israeli aircraft, causing damage but no casualties, in Gaza City, July 29, 2014. - REUTERS/Finbarr O'Reilly

GAZA CITY, Gaza Strip — The tragedy that befell Yasser Hajj, who lost all his family members on July 10 after Israel shelled his home in Khan Yunis, was followed by isolation. Hajj was forced to leave his destroyed home and had a hard time finding a new place to rent. The building owner's excuse was always the same — “We do not rent to targeted families or resistance members.”

He and his married sister are the only ones left in the Hajj family. They decided to live together as they try and pick up their lives. But each time they looked to rent a home, they encountered rejection out of fear by landlords that their building might be targeted by shelling in a future confrontation with Israel.

“One time, we went to see a building owner who was preaching in a mosque during the war, encouraging and praising the resistance. When I asked him if he had any apartments for rent, he said, ‘I do not rent out to members of the resistance or families whose houses were targeted.’ Is this not hypocrisy?” Hajj said in despair.

He finally found a modest home, not an apartment in a building. Hajj called on everyone to welcome those who lost their families during the war, instead of isolating them.

As soon as the 51-day war ended on Aug. 26, many raised their concerns about allowing political factions to rent apartments. On Sept. 6, the residents of Daoud Tower organized a protest in front of the building, in the middle of the Ramal neighborhood in Gaza, to prevent the media and the employees of political organizations to enter their offices. There was a calm dialogue between the employees and the residents, until the police interfered, allowing the employees to enter and demand the tower’s board of directors to raise the issue before the court to legally evict the tenants from the building.

Signs were placed on the tower’s entrance reading: “All residents on all floors should know their neighbors. We want to know who the civilian residents are.” 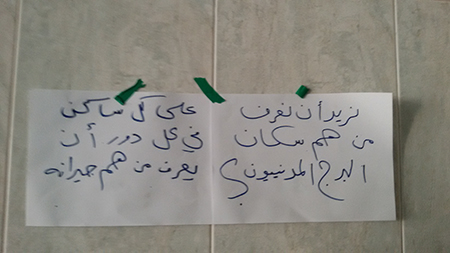 The handwritten sign on the entrance to Daoud Tower reads, “All residents on all floors should know their neighbors. We want to know who the civilian residents are.” (photo by Asmaa al-Ghoul)

A woman who was carrying a sign that read “NO to service, media and security institutions in Daoud Tower!” told Al-Monitor: “The tower was bombed eight times during the war. We were terrified. Our cars and neighboring apartments were destroyed, and some of us were injured. All of this happened because certain political bureaus rent offices here under the pretext of being trade companies.”

During Operation Protective Edge, Israel shelled three residential towers in Gaza City: Basha Tower, the Italian Tower and Zafer Four. In broad daylight and while cameras were running, Israel destroyed Zafer Four, which was described by some as the height of the war.

A resident in a different tower in Gaza City, where Al-Aqsa TV recently rented an office after its building was targeted during the war, said: “The [Al-Aqsa TV] channel already has an office in the tower, as well as many other media offices affiliated with political parties. Why [are they] renting an additional office now, especially since the tower has already been bombed several times because of the [media] offices? When we objected, the answer was, ‘If any of the residents has a problem with this, they can simply leave.’”

An Al-Aqsa employee, who preferred to remain anonymous, told Al-Monitor that the dispute does not revolve around the channel renting an office in the tower, but rather concerns the use of the elevator and the rental fees, since the apartment’s owner exaggerated in raising the price. “[Al-Aqsa TV] already owns an apartment in the tower, so why would the residents be against it renting another one? On the contrary, they welcome the resistance and its supporting media,” he said.

“If the residents object, it would be very [understandable] after all the random bombing and the killing of civilians. We should not make a big deal out of it, since the exact same thing happened after the 2008 war, but in a less obvious way,” he added.

Hamas spokesman Sami Abu Zuhri agreed with him. “This is a natural state of anxiety due to Israel’s brutal crimes, but it does not reflect the general situation. People have been embracing the resistance throughout the war and after it,” he told Al-Monitor.

Zuhri said that all the leaders whose homes were bombed have recently rented apartments among citizens without any problems. “They [Hamas leaders] are part of the [Gazan] people and families. I confirm that no military parties have been renting apartments among [civilians], only media offices,” he said.

A political source, who was among those who attended the Cairo negotiations, told Al-Monitor that during the war Israel bombed residential towers so that civilians would pressure the resistance and step up the public opinion to stop the war.

“This is what actually happened. On the same day Israel bombed the Basha Tower, threatening to hit other towers, the war came to an end. We could not stand by idly, watching civilians die and being terrorized, while Gaza was being destroyed,” the source said.

It seems that this policy still has an impact even after the war ended, as people refuse to rent apartments to individuals who are politically or militarily active. Some have gone as far as refusing to marry their daughters off to the latter for fear that they would become widows before their time.

However, Hajj seems optimistic in finding a suitable bride. “I will live with my only remaining sister until I find the right girl for me and get married,” he said.