IEDs planted by the Islamic State in Raqqa still litter the war-torn Syrian city one year after the radical group was ousted from its former stronghold, but mine-disposal teams also find newly planted mines. 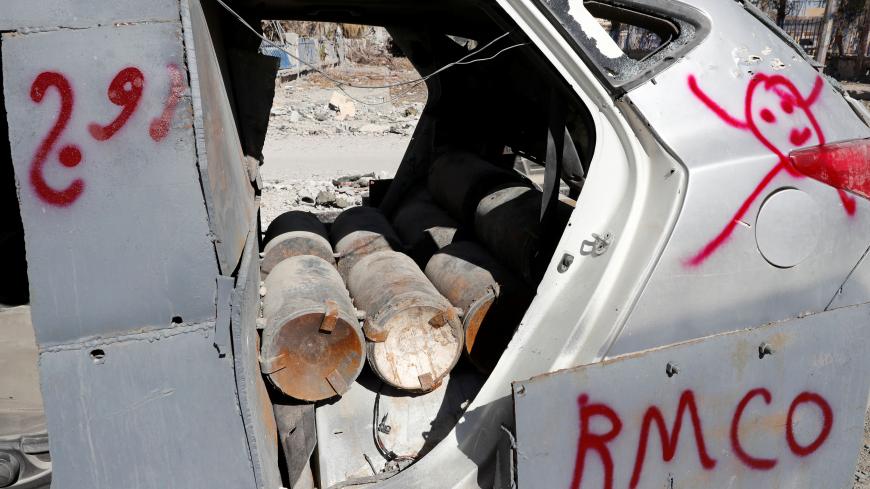 Bombs inside a vehicle used by Islamic State militants in suicide car bombings are pictured after a demining team defused them in Raqqa, Syria, Oct. 18, 2017. - REUTERS/Erik De Castro

RAQQA, Syria — Hagid "the minesweeper" put on his black latex gloves and placed his work kit on a piece of collapsed ceiling. Flashlight stuck between his teeth, he illuminated the mine he just discovered behind flowerpots in a stairwell. The building, once part of the Euphrates University, is no more than a wreck — the result of a gruesome, four-month-long battle. The second floor crashed on the first.

Hagid cut a wire and raised the neutralized mine with both hands to take a look at it. “A nongovernmental organization was supposed to have completely cleaned the building,” the Raqqa native told Al-Monitor.

In what was for three years the largest stronghold of the Islamic State (IS) in Syria, mine-disposal experts feel overwhelmed. The jihadis, known for producing sophisticated explosive devices on an industrial scale, booby-trapped every corner of Raqqa.

In the first months following the reconquest of the city on Oct. 17, 2017, by the US-backed, Kurdish-led Syrian Democratic forces (SDF), an average of 10 civilians a day were killed by improvised explosive devices (IEDs), representatives of the Raqqa Civil Council (RCC), doctors and soldiers told Al-Monitor. One year on, jihadis still spill blood in the streets of Raqqa.

Perhaps even more dangerous than yesterday's mines are the bombs of today. For several months, sleeping cells presumably linked to IS have been conducting a spate of deadly operations against the SDF, the new occupants of Raqqa. “A bomb hidden in a trash bin exploded Sept. 19 when a police car passed by, killing two people,” a RCC staff member, who asked to remain anonymous for security reasons, told Al-Monitor. “Raqqa is dangerous, sleeping cells are everywhere.” 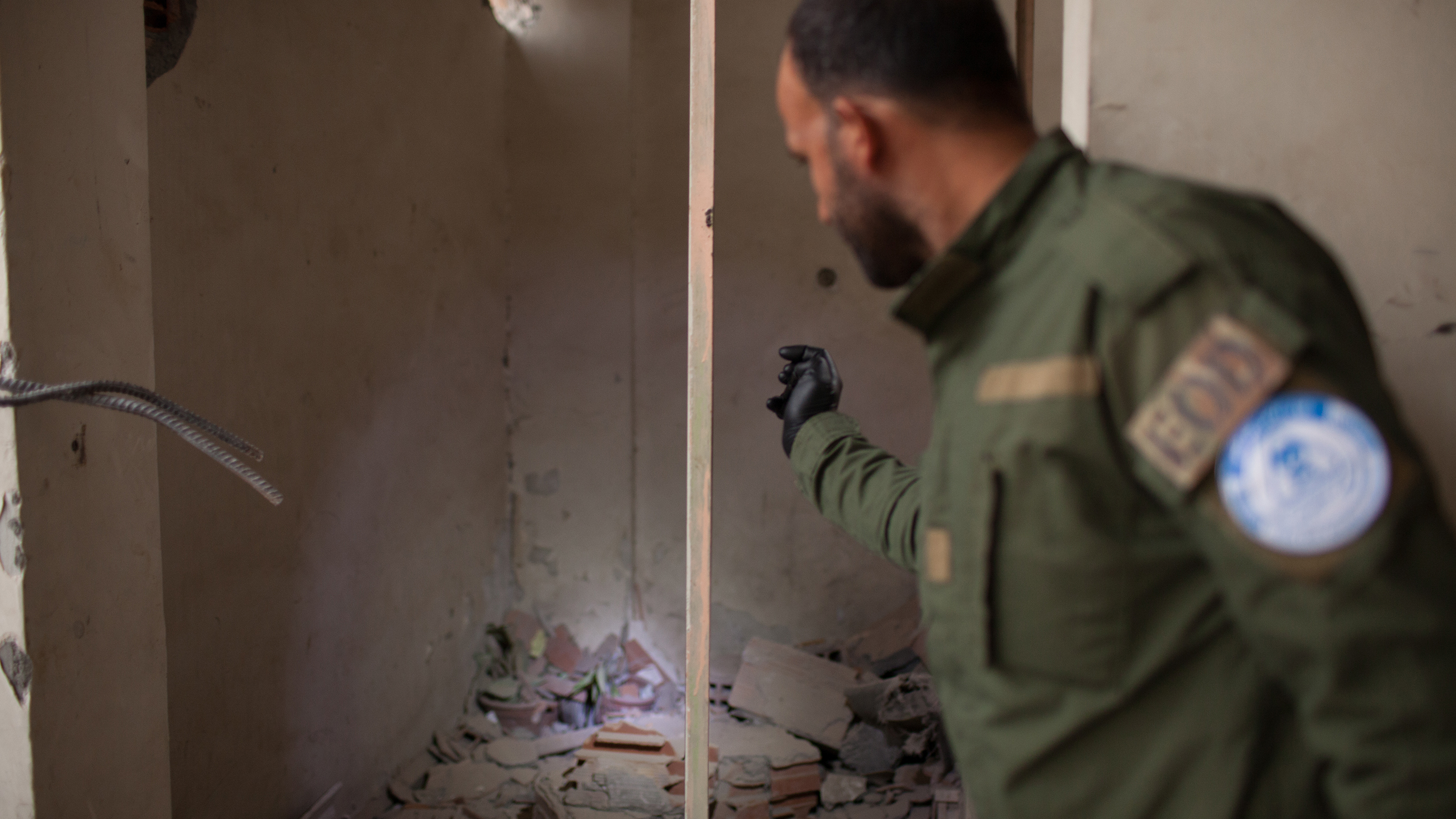 Hagid looks for mines at a building once part of the Euphrates University, Oct. 10, 2018. (photo by Al-Monitor/Charles Thiefaine)

A dozen people were killed by these shadow fighters between mid-August and late September, Abdullah al-Aryan, an official at RCC, told Al-Monitor. While the SDF, largely made up of Kurdish fighters from the People's Protection Units, are currently leading the assault on the last IS pocket in the Deir ez-Zor region, security services believe that the attacks carried out by IS fighters in Raqqa are intended to destabilize the reconquered areas and divert the attention of the US-backed troops.

In late September, local forces dismantled the largest cell ever discovered since the “liberation.”

“Civilians alerted us that a black flag was flying over a building. We went first to make sure the place was not booby-trapped. As soon as we arrived somebody shot at us with a machine gun,” Hagid said. The team of mine-disposal experts, surprised and underarmed, decided to pull back and wait for the arrival of the armed forces.

The clashes resulted in the death of all IS fighters, security sources told Al-Monitor. Assault rifles, IEDs and a car bomb were found in the building. “We did not expect to come across such a large, well-armed group,” Hagid noted. “We knew there were small cells, individuals, but we never thought we would find a network that big.”

It will not be the last attack. On Oct. 9, parked on the side of a downtown road, a booby-trapped motorcycle exploded at the passage of a coalition convoy, local officials said. Triggered too late, the blast caused no casualties, but the recurrence of the attacks and their sophistication cloaked Raqqa in fear.

Some security officials now firmly believe in the involvement of Bashar al-Assad's regime in the recent wave of attacks. “The regime is trying to destabilize the area so that the coalition and our forces cannot control it in order to open the way for their return,” Mahmoud Youssef, a Kurdish administrator of Raqqa's internal security forces, told Al-Monitor.

Since then, political graffiti has appeared on the walls of the city, threatening local authorities. “Six months ago people wrote, 'We are here.' Who are they? It’s complicated,” Iskandar Mohammed Issa, a spokesman for the internal security forces, told Al-Monitor.

The city has also seen in recent months growing tensions between the majority Arab residents and SDF forces dominated by Kurdish personnel that spilled into sporadic protests. The protests, quelled by force, called for the SDF’s eviction from the city, Reuters reported in June.

The streets buzz with the rhythm of horns and generators fuelling reconstruction sites. A loud sound suddenly silences Raqqa. A lethal rain of debris hits a building facade, and a column of thick black smoke rises above dismembered buildings. "Probably a car bomb," calmy guessed a passerby, without even taking a look at the site of the explosion.

The car of a mine-disposal expert had exploded with its passengers, killing two people. For once, the authorities believe in an accident: The vehicle was loaded with IEDs. Hagid lost two colleagues. He has not returned to his base since the funeral.

"The whole team is devastated, but we will continue our work,” he said. “It is a duty." 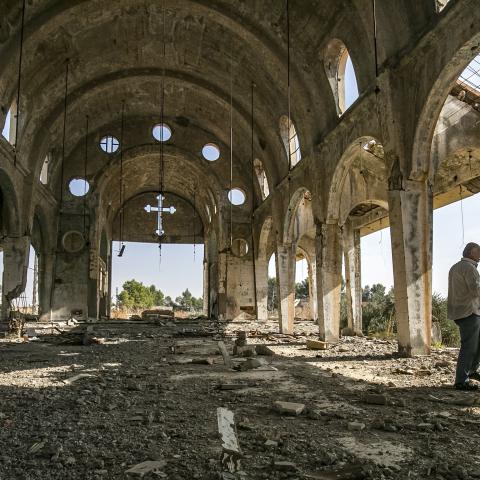 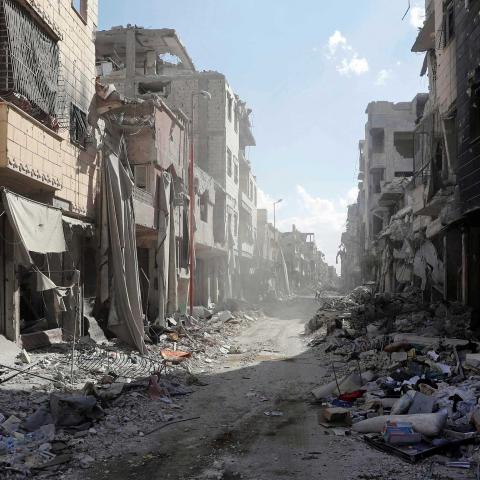 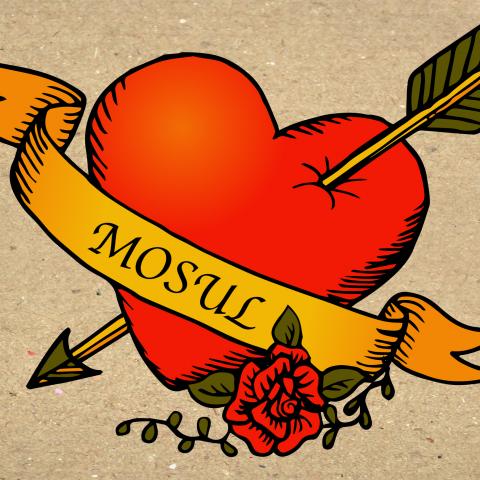