The recent story of a Yemeni man and a Saudi woman who fell in love and fled to Yemen highlights long-standing political and social tensions between their two neighboring states. 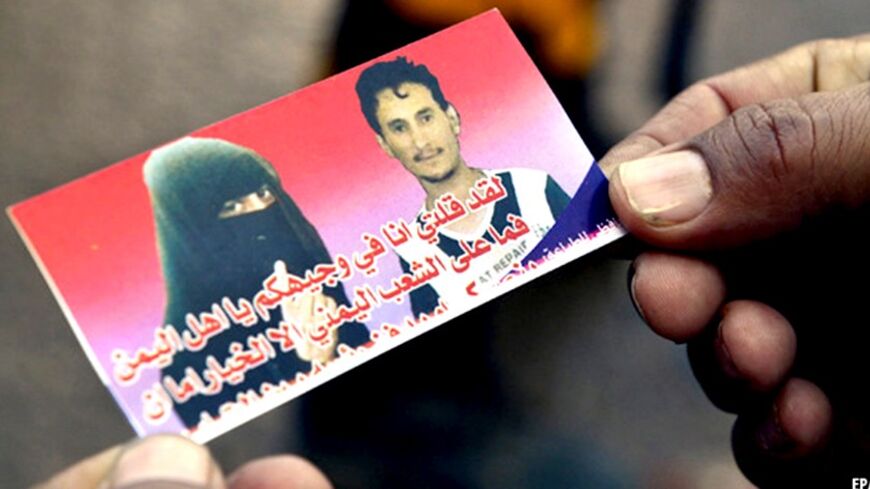 It is not just a love story, but one of rebellious love, with a touch of Romeo and Juliet. This Arab version features added struggle within a populist setting and crosses into the territory of geopolitics.

Huda al-Niran and Arafat Tahar, a Saudi woman and a young Yemeni man, fell head-over-heels in love in a country where romance is a crime and severely punished. The Kingdom of Saudi Arabia does not tolerate emotions. Women do not even enjoy the right to drive a car, let alone fall in love with a Yemeni, which as an accusation is far more serious than one might expect.

Tahar, one of hundreds of thousands of Yemeni workers in Saudi Arabia, had a job in a cellular phone shop. One of his female clients later became his lover. When Tahar asked for her hand in marriage, her parents rejected his request. Niran was punished and forced into marrying one of her relatives to steer her clear of this “disastrous” affair with a Yemeni man. The wind, however, did not blow as Niran’s family had desired.

The couple's deep feelings led them to flee Saudi Arabia for Yemen, risking capture by Saudi and Yemeni security guards, and for Niran, a charge of illegal entry. They did so knowing full well what Niran would face were she to be returned to her family after such an adventure: death.

A legendary call for help

The lovers made it to Yemen safely, but Saudi authorities called on Yemeni officials to hand over the “kidnapped” Niran. A claim of kidnapping is common by families when a female runs away from home. It is made to save face from the dishonor that befalls a family when a female abandons her home to be with her lover outside the legal framework of marriage.

After the Saudis' request, Yemeni security forces detained Niran at the Department of Immigration on the charge of illegal entry into the country. Meanwhile, Tahar was charged with abduction. Niran denied being abducted and asserted that she willingly ran away with him. Her confession led to charges being dropped against Tahar.

Niran, knowing the Yemenis' weak spot, sent a short message through media outlets, which were closely following the story, stating, “People of Yemen, I am under your protection.” Her proclamation hit a nerve among Yemenis, who have a tribal legacy that necessitates protecting anyone who utters such words. In addition, Yemenis would tend to lend an ear to such a call due to the political battles waged against the neighboring Saudis. Yemenis do not view the kingdom favorably or approve of its official and religious policy toward their country.

Naturally, a female calling for assistance has a huge impact. When the female is Saudi, and her appeal coincides with the deportation of tens of thousands of Yemenis from Saudi Arabia for labor law violations — an accusation that has proved unconvincing among Yemenis — then it will dramatically benefit the girl. Prior to Niran's trial, social media had been rife with thousands of comments supporting her, asserting that Yemenis would take to the streets and protest in front of the court so that she could not be sent back to Saudi Arabia. One session was postponed due to the large number of protesters outside.

If the support shown to Niran did not emanate from a belief in love as a sublime value, for which both lovers heavily sacrificed, it was surely the result of Yemenis preventing Saudi Arabia from trampling on Yemeni dignity or yet again imposing it wishes on the Yemeni judiciary. The court's judgment, which attracted unprecedented media coverage, tipped the scale in favor of love. It was bold enough in rejecting Riyadh's request to the extent that some people considered its decision a declaration of independence for Yemeni decision-making, which had been shackled by Saudi Arabia and the power of its oil.

The court's judgment held that the period of detention to which Niran had already been subject was deemed sufficient enough punishment for illegal entry. The decision also granted Niran the right to apply for asylum from the competent authorities. The Office of the United Nations High Commissioner for Refugees (UNHCR) had expressed its concern that Yemeni immigration authorities had mishandled Niran's case in such a way as to put her in danger. The UNHCR suppported Niran's being granted asylum.

After the judgment was announced, a number of Yemenis helped the lovers with financial assistance to marry. Some donated several thousand dollars, and they were offered an apartment. Yemeni social media celebrated by sharing photos of this Yemeni man, Tahar, who supported love by lavishly furnishing the apartment.

On the other side of the border after a period of silence, Saudi social media users — who had been certain that they would achieve victory and that the Saudi authorities would succeed in disciplining the girl and the guy who dared to publicly fall in love with her — wrote comments degrading Yemen's decision to grant her asylum, arguing that it is no Scandinavia.

The royal walls of separation

In Saudi Arabia, it is a complicated affair for a foreigner to marry a Saudi woman, despite there being a large number of unmarried Saudi women. In addition, for decades, foreigners asking the hand of a Saudi woman have been accused of seeking Saudi nationality, legal residence and wealth. Love and humanity are of insignificant issues compared to these other matters, falling in importance below the law on smoking.

The aim of Yemenis in supporting Niran and Tahar may have been to convey a humane and moral message, showing that they respect and protect women. Yemenis also reject others trying to take control over their emotions, and they are generous despite their poverty. They now have exhibited a sovereignty that the Saudis' pressure cannot affect.

Referring to Saudi Arabia, the famous Yemeni author and poet Abdul Karim al-Razihi, who strongly supported Niran and Tahar, wrote on his Facebook page after the victory of their love, "We think about building bridges, while [it] always thinks about building walls."

The aforementioned does not necessarily imply that Yemenis are romantic people. It is hard to imagine the same amount of tolerance being expressed publicly if a Yemeni woman were to ran away, even with a Yemeni man. In the best-case scenario, her tribe would rage and then disown her. Rather, it is about politics and sovereignty. It is about the fact that protecting love became a way to defend the latter.