No second act for American troops in Iraq

The United States has finally shifted away from regime change in Syria and toward addressing the terrorist threat that is consuming Iraq. 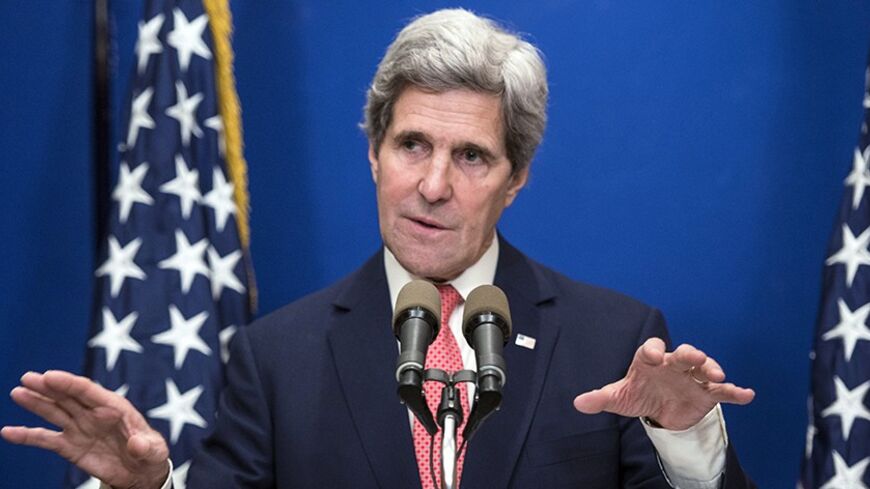 US Secretary of State John Kerry speaks during a news conference at the David Citadel Hotel, Jerusalem, Jan. 5, 2014. - REUTERS/Brendan Smialowski

US Secretary of State John Kerry’s Jan. 5 remarks in Jerusalem — namely that “al-Qaeda, who are trying to assert their authority not just in Iraq but in Syria … are the most dangerous players in that region” — will certainly not be welcome news to many of Washington’s friends in the Gulf. The Saudis in particular remain committed to Washington’s now passé “Assad must go” policy, and are prepared to sup with the devil in pursuit of this now-unattainable objective.

Kerry’s remarks suggest Washington’s reluctant conclusion that arch nemesis Bashar al-Assad may have been right … on this point at least. Without a doubt, it is Washington more than Assad that has been forced by developments in the war to “change its calculations,” including the narrative about the jihadist-dominated opposition. Assad’s staying power and the failure of the opposition to create a viable alternative to the regime have broadened the space for a US reconsideration of President Barack Obama’s precipitous and destructive declaration breaking with the regime in August 2011.

Kerry, with the Washington establishment reluctantly but obediently in tow, is now saying that the jihadists marauding throughout the Fertile Crescent are more dangerous than the butcher of Damascus, who refuses to die, and indeed whose fortunes have been resurrected out of the inferno that is Syria today. These al-Qaeda wannabes, incapable of anything but destruction, are more dangerous even than the Iranians, who, we are warned, will at any moment have their finger on the Bomb.

Until recently, the United States all but ignored what was and remains the defining regional dimension of Syria’s war — seeing it simply as a means for reducing Iranian power and expanding an idealized dream of a secular and democratic Arab Spring.

Even then, the contrast with reality was distressingly clear to anyone who bothered to look — Syria was viewed by the opposition’s bankers and its most vicious fighters as the gateway to Iraq, the real prize and symbol of a Sunni resurgence in a sectarian divide ignited by the US invasion and destruction of Iraq. And Obama’s interest in being on “the right side of history” in Syria required a willful ignorance of this reality, and therefore it was always an aspiration rather than a policy. It never included a commitment to prevail whatever the cost.

Now the genie loosed by the US invasion of Iraq and re-energized by Syria’s violent implosion has reappeared in Iraq itself — as its Sunni patrons always hoped and believed — becoming a key arena for the latest chapter in a regional Sunni offensive. Baghdad — always the jewel in the crown — is in play. The offensive in Anbar is evidence yet again that the timetable and supporting narrative established by the United States is not the one that history will respect.

The US departure from Iraq in the last days of 2011 did not end the war. But it ended America’s war. Today’s battles in Ramadi and Fallujah, where so much blood was spent to so little lasting effect — have reached a point where they can no longer be ignored.

There is not a little pathos in the questions now being asked of Washington about US military intervention in Iraq to battle Salafists once again … and in the forlorn assessment — now after all the sacrifices — that it is Iraq’s fight to win or lose.

“We have done all that we can.” Indeed.

“Now,” explains Kerry, “we’re going to do everything that is possible to help them, and I will not go into the details except to say that we’re in contact with tribal leaders from Anbar province whom we know who are showing great courage in standing up against this as they reject terrorist groups from their cities. And this is a fight that belongs to the Iraqis. That is exactly what the president and the world decided some time ago when we left Iraq. So we are not, obviously, contemplating returning. We’re not contemplating putting boots on the ground. This is their fight, but we’re going to help them in their fight.”

It is, as Kerry said, indeed “obvious” that the Americans won’t return to the streets and alleys in Anbar, where 1,300-plus Americans died and many more Iraqis continue to die. There will be no second US act. Nor should there be. There are limits to what raw US military power, especially power employed without a compelling strategic rationale, can accomplish in the Middle East. We’re out … finished. It’s now someone else’s ballgame.

Kerry has apparently been won over to ranks of the Arab nationalists who fought for an end to British and US meddling. It is, he declares, their fight: “Iraq for the Iraqis,” to paraphrase the defining ideal of the first Arab, original anti-colonial spring that commenced a century ago. “That is what we determined some time ago,” Kerry conceded, “that we can’t want peace and we can’t want democracy and we can’t want an orderly government and stability more than the people in a particular area, in a particular country or a particular region. And so we will help them in their fight; but this fight, in the end they will have to win, and I am confident they can.”

Avid followers of US policy could not but have noticed that the “we can’t want peace more than the parties themselves” mantra has most often been part of the rhetorical arsenal to describe failed US efforts to bring Israelis and Palestinians to the table. Former US Secretary of State Hillary Clinton often used it in this context. But it is not yet part of Kerry’s vocabulary. Indeed, in recent months it has fallen into disuse as he has been won over to the tantalizing prospect of a meaningful diplomatic engagement between the Israelis and the PLO.

But seeing this refrain poke its head above the Iraq sandpit suggests a bittersweet US acknowledgement of the limits of US power — and interest — to affect Iraq’s (read also Syria, and Egypt’s) future. In Syria, victory for the jihadists, if such an outcome could ever be defined as victory, appears to be actively opposed by the United States, even as it seeks to empower the weakest of Assad’s opponents. And an unprecedented Egyptian offensive against a widening array of domestic opponents is watched with dismay.

Contrast this somber mood with the generally farsighted and imaginative US engagement with Iran — the most recent evidence of which is a newly declared US flexibility in parsing Iran’s presence at the Geneva II talks. Iran’s participation is, however, principally a function of the state of relations between Washington and Tehran on the nuclear file. Iraq and Syria, in contrast, are following a different, far less hopeful, trajectory.