Amid an electricity crisis that has led to increasingly long daily power cuts, some residents in the Gaza Strip are turning to solar energy systems. 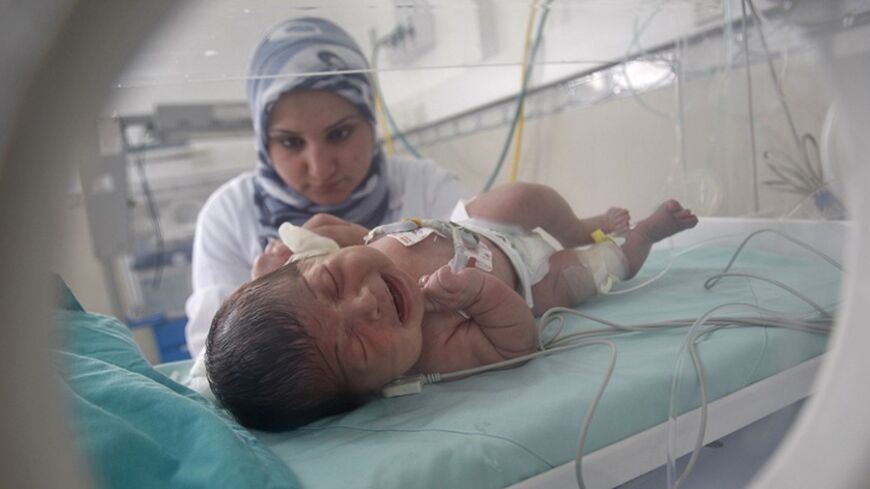 A Palestinian nurse tends to a baby inside an incubator at a hospital in Khan Yunis, March 24, 2012. In Gaza City, at the Nasr Children’s Hospital, the nursery for premature children relies on a solar-energy system. - REUTERS/ Ibraheem Abu Mustafa

Abir al-Hurqali got dressed and put on makeup as she prepared to leave her house in the Shujaiyya neighborhood of Gaza City to attend her cousin's wedding. The ceremony was being held in a wedding hall in another part of the city. Hurqali was shocked when she tried to operate her electric wheelchair only to discover that the battery had died and needed recharging, which would take at least an hour.

When she tried to recharge the battery, Hurqali realized that the electricity was off. This left her frustrated, since she was the last person in her family to leave the house. She had to call one of her neighbors to give her a ride to the main street, where she could take a cab to the wedding. The side street leading to her home was not designed to accommodate cars, so cabs could not drive to her door.

Hurqali is one of Gaza's many physically disabled residents. She uses her electric wheelchair on a daily basis to go to university, where she is majoring in multimedia studies. Her movement, however, is often restrained by electricity outages. Every time she wants to go somewhere, she has to check whether the battery will last long enough to get her to her destination and then back home.

“I have struggled a lot with the continuous electricity outages,” Hurqali told Al-Monitor. “Frequently, I can't leave the house because the wheelchair battery is dead or doesn't have enough power for me to reach my destination.”

“Recently, I began calculating the time it takes me to reach my destination and how much power will be left in the battery, since it has died on me in the middle of the road more than once. When this happened, I had to call one of my family members to pick me up in a cab and take me to the closest place that has electricity available to recharge the battery,” she said.

Gaza has suffered from a severe electricity shortage since mid-2006, after Israel bombed the territory's only power plant. The crisis was then compounded by the political disputes between Hamas and Fatah and issues surrounding importing the industrial fuel required for the movements’ operations. Electricity is provided for eight hours a day, and is periodically cut for another eight hours.

As part of a project implemented by the Salam Club for the disabled in Gaza, a few months ago Hurqali received a solar panel to recharge her wheelchair battery when electricity is unavailable from the grid. It has been a great help to her.

Hurqali offered, “Now I go to university without any problem. I don't think about recharging the battery using electricity, because I have my solar panel. It restored [the usefulness of] my wheelchair after I thought for years that it was useless. Now I can go anywhere without having to calculate how much battery power is still left.”

Many Gazans have started to rely on solar energy to generate electricity as a replacement for other methods, such as generators that operate on fuel imported from Israel. Gaza is struggling with a scarcity of fuel, in addition to its high price, after smuggling through tunnels on the Egyptian border ceased in mid-2013.

Ali Hussein, an engineer and owner of a company involved in solar energy, told Al-Monitor that the demand for solar energy systems has been increasing among Gazans. The high price of the systems, however, limit the purchasing power of many residents.

According to Hussein, the cheapest system for home use costs around $1,350, an extremely high price for the majority of Palestinians in Gaza. The system can provide lighting for hours and operate television sets and other light electrical appliances.

Some public institutions recently began to rely on solar systems in some of their facilities. At the Nasr Children’s Hospital, the nursery for premature children relies completely on such a system. In addition, the water-pumping station in Khan Yunis is currently functioning on solar power as are some schools in the Gaza Strip.

In general, systems that use solar energy are categorized as negative or positive, depending on the way they use and transform solar energy and distribute it. The technologies using a positive solar energy system involve the use of photovoltaic panels and a solar thermal collector, in addition to electrical and mechanical devices, to transform sunlight into a useful form of energy.

Gaza resident Ayman Ayyad said that 70% of the energy used in his home is solar. After a long struggle with the ongoing electricity outages, he turned to solar power eight months ago. The outages were particularly hard on him because he has a lung disease and must operate a ventilator every few hours.

“I feel relatively better now in terms of electricity. I no longer struggle [to operate my ventilator] since I installed the solar energy system at home. Although it was very expensive, costing more than $4,000, my need for electricity is priceless because of my medical ventilator,” he told Al-Monitor.

Gazans have been trying to find alternative means to alleviate the electricity problem since it emerged. At first, they relied on small, fuel-operated generators, and then they turned to rechargeable batteries, called inverters, used for lighting. The current trend appears to be toward solar energy, but financial hardship is impeding it from becoming widespread.