Is the center of gravity in the Syria war expanding from Damascus to Beirut? 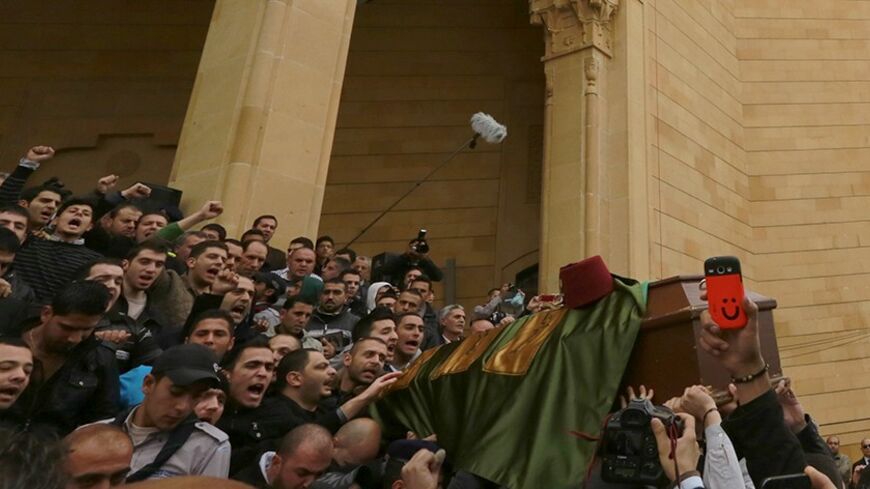 People carry the coffin of former Lebanese Minister Mohammed Chatah's bodyguard Tarek Badr in Beirut on Dec. 29, 2013. Badr, Chatah and five others died as a result of a Dec. 27 car bombing. - REUTERS/Jamal Saidi

Not a year passes by and another sets in without strife in its worst forms looming over this small country. The Lebanese people bid farewell to 2013 with an assassination that targeted a political figure (Mohammad Chatah) who represented the state as well as moderation, in what seemed to be a direct targeting of the Future Movement and subsequently the Sunnis in Lebanon. The year 2014 started off with a bombing in Beirut’s southern suburbs in response to the assassination of Chatah, as a sort of figurative arrow shot through the heart of the Shiites.

It is as if the Lebanese scene has become the main battle front for the conflict taking place in the Middle East. The expansion of the center of gravity from Damascus, where the battles typically rage, to Beirut, where terrorism is taking over, is apt to continue for the following reasons:

First, terrorism infiltrated the Shiite residential neighborhoods and towns that constitute Hezbollah’s welcoming environment, making them the party’s soft and vulnerable underbelly. Hezbollah has always chosen the place and timing of its battles — such as in 1996 and 2006, during the two wars with the Israelis. Hezbollah fought both wars in the south according to its own distinct military style of guerilla warfare. These military tactics depleted the Israeli army, which has more capabilities and is more organized than Hezbollah.

Although Hezbollah chose how to start and be engaged in the battle in Syria, the party is no longer in control of its course or geographical limitations. Hezbollah’s secretary-general tried in vain to address his political rivals, as happened in February 2013 to limit the conflict in Syria and distance Lebanon from it. Yet, facts on the ground contradicted his rhetoric. At least two variables have gone beyond Hezbollah's calculations and introduced an element of surprise: the flux of displaced Syrians and the extension of extremism into Lebanon. These two variables pose a threat to Hezbollah in the long and short runs, equal to and maybe worse than the fall of the allied regime in Syria.

Displaced Syrians have entered every village and city, including the Shiite ones. They have been encumbering the economy in a way that is affecting the supporters of Hezbollah as well as the rest of the Lebanese people. They are a time bomb, as they could pose security threats at any given moment. Any displaced Syrian could become a terrorist or suicide bomber feeding on oppression, poverty and persecution. These feelings are further ignited by the engagement of Hezbollah with the Syrian regime responsible for the plight of the Syrians. Extremists who utilize terrorism know very well the weak points of Hezbollah and how costly it would be for a party relying on a broad popular base within its sect to be involved in a war of attrition and sectarian instigation. Given that the Shiite sectarian sense of belonging, which has always been a cornerstone of the Shiite group identity, takes pride in the party’s excess of power, any hint of Hezbollah’s weapons weakening and becoming incapable of fending off the extremists would give rise to fear and concern over the future.

The most important factor in this confrontation with the extremist groups that moved their war to Lebanon, where Hezbollah enjoys a strategic depth, is that these groups have nothing to lose. Hezbollah, however, has a lot at stake, the least of which are the cohesion of its welcoming environment and its partnership with the rest of Lebanese society.

Here, the calculations of Hezbollah differ from those of the Syrian regime. The latter does not care about what the future will bring in terms of war costs, notably after the excessive bloodshed and high numbers of victims. This regime is playing its last card.

The extremist card is also serving the Syrian regime’s interests by depicting it before the public as being opposed to religious fundamentalists, justifying its oppressive policy toward its political rivals. Some say that the regime was one of those responsible for manufacturing the extremist trend prior to the US "surge" in Iraq in 2003.

In Lebanon, the Samaha-Mamluk affair has revealed the intentions of the regime to incite sectarian strife. Prior to this, the battles of Nahr al-Bared showed that the heroes of Fatah al-Islam, one of the first extremist organizations, were released from Syrian prisons only to work to the advantage of the regime’s agencies. There is no doubt that Hezbollah has known of the intentions and strategies of the regime. Back then, Nasrallah’s warning against the entrance of the army to Nahr al-Bared was more than dubious.

There is no doubt that some of the extremist groups are made up by and aligned with regional and international intelligence agencies. Every extremist organization that has proliferated and branched off recently may have more than one regional sponsor. It is certain, however, that in the long run, some will bear more than others the repercussions of these lethal strategies, even if they once seemed to serve their tactical interest. The extremist beast diverts attention and blindfolds the eyes, and may also be used as a pretext to forgive the sins of the regime. Yet, the plan could backfire at any time and the virus that was leaked from the test tube will inevitably contaminate the lab, inside and out.