Media reports indicate that the thorny issue of the right of return is being discussed at the US-brokered Palestinian-Israeli talks. 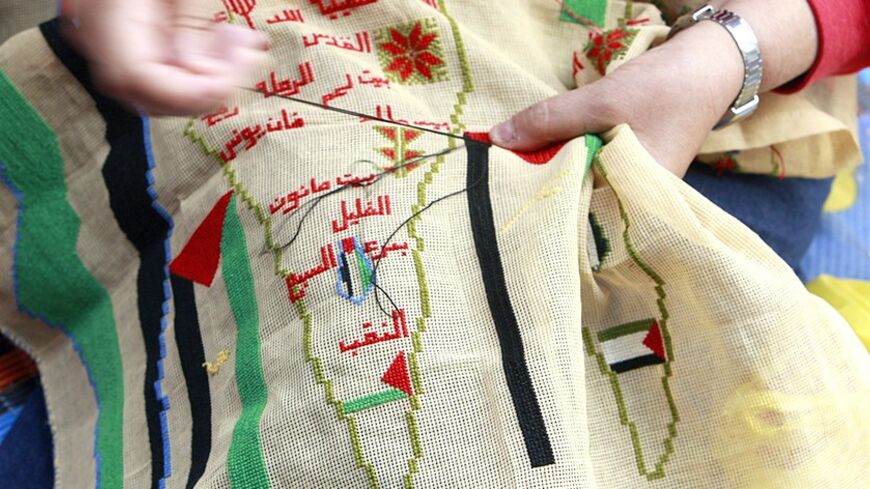 A Palestinian woman embroiders a map of Palestine at the Burj el-Barajneh refugee camp, Beirut, May 15, 2009. - REUTERS/Jamal Saidi

Although the United States has insisted to the Israelis and Palestinians that all five permanent-status issues are part of the US-brokered negotiations, it was only when an Israeli radio report mentioned the issue that the topic suddenly gained credibility in the eyes of many skeptics. The Palestine News Network ran a short translation from Israeli radio, confirming that US Secretary of State John Kerry had made reference to the issue of Palestinian refugees and that he had put forward four locations for their absorption.

Kerry’s suggestion no doubt reflects the various discussions, differences and understandings between Israel and the Palestinians. The Palestinians have repeatedly insisted that Israel acknowledge its historic and moral responsibility in creating the Palestinian refugee problem. Many expect that this issue, more than any actual agreement on numbers, could be the gateway to a breakthrough.

After the issue of who is responsible is resolved, it is understood that Palestinian refugees are to be given choices, including returning to their homeland in Palestine, staying where they are or going to certain third countries. The fourth option, which is highly contested, calls for some Palestinians to settle in Israel. The issue is finessed by having this small population absorbed over a number of years based on Israel approving it within the context of family reunification.

The Arab Peace Initiative dealt with the issue of refugees by citing UN Resolution 194, which calls for the right of return. The initiative perspective then added, however, that “an agreed” solution must be found. This key phrase gives the Israelis a virtual veto on any solution it does not consider acceptable.

The discussions on this issue over the years are best summarized in a Canadian effort referred to generally as the Ottawa Process, a mostly academic project led by Canadian academics and former diplomats connected to McGill University. The project's website, Palestinian Refugee ResearchNet, contains research and discussions on the history of Palestinian refugees and various proposals regarding them. This information is available to everyone.

Experts in refugee issues say that putting aside politics, polemics and narratives, the most efficient way to resolve the Palestinian refugee issue requires three basic steps: acceptance, choosing return options and implementation, including compensation. Refugees agreeing to resolve their status in this way would have to sign a document to that effect and would receive an immediate cash payment. This would also necessarily require them to sign off on which of four countries they would like to adopt as their permanent home.

Abbas Shiblaq, editor of the refugee newsletter Shaml, noted in 1996 the following in regard to implementation of the right of return: “It would be naive to assume that political considerations and developments of the last fifty years will not have an impact on the way that this right might be implemented.” Shiblaq and other McGill University experts assert that not every single refugee will return. They base this conclusion on a number of surveys of refugees, including a comprehensive study by Khalili Shikaki of the Palestinian Center for Policy and Survey Research. He found in 2003 that less than 10% of Palestinian refugees in the West Bank, Jordan and Lebanon were willing to return to historic Palestine and become Israeli citizens.

At one time, it was argued that the refugee issue involved two groups: those (laji’in) who became refugees in 1948 and those (nazihin) displaced in 1967. The idea was that the Palestinians displaced from the West Bank in 1967 could be returned immediately, without waiting for resolution for the 1948 refugees. This idea was scrapped, however, after the eruption of the second intifada in 2000, and the idea prevailed for a resolution involving all registered refugees with the United Nations Relief and Works Agency (UNRWA).

The status of UNRWA, created in 1948, is itself also hotly debated. One suggestion put forward is to dissolve it within 10 years of any agreement. The Israelis insist that whatever agreement is reached, that will be considered the end of negotiations on it, closing the entire file forever.

While many worry that the refugee issue is a deal breaker, leading Palestinian thinkers such as Al-Quds University President Sari Nusseibeh feel that the disagreements over the right of return — while extremely personal and emotional — are less difficult to resolve than, say, issues of borders or Jerusalem. As with all the permanent-status issues, however, neither side will reveal its final position on any topic until there is a comprehensive agreement that can be sold to the public as a single, closed package that must be accepted or rejected in its entirety.