Heads of localities in southern Israel near Gaza blame Defense Minister Moshe Ya'alon for neglecting their security, following decision to cut back the defense budget despite the turmoil in the Sinai Peninsula. 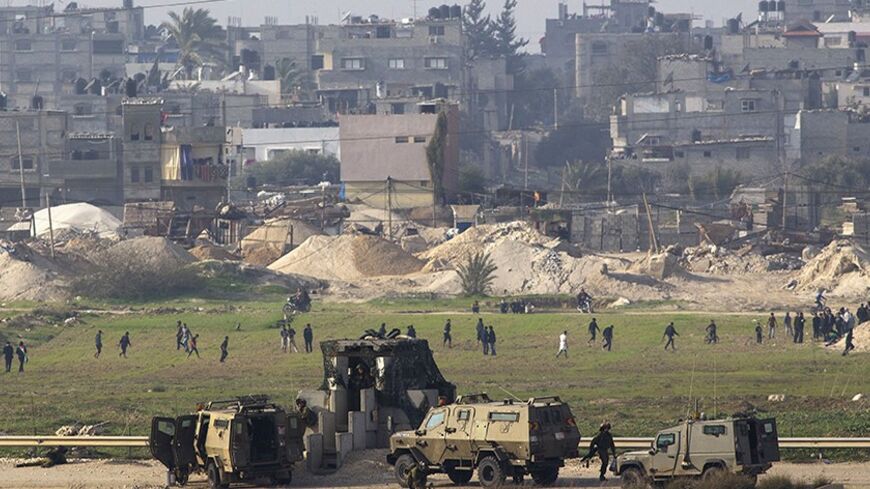 Palestinian demonstrators protest near the Israeli border fence with Gaza, as Israeli soldiers stand guard on the other side near Karni crossing, Jan. 17, 2014. - REUTERS/Amir Cohen

Heads of localities in the Gaza Envelope region and near the Egyptian border accuse Defense Minister Moshe (Bogie) Ya’alon of abandoning their security. This, in the wake of Ya’alon’s decision to abolish the protection of these localities, formerly provided by Israeli Defense Forces (IDF) soldiers. In addition, Ya’alon also decided to cut back the basket of military services they enjoyed until now, including funding for a circumferential fence, an electronic gate, a weapons storehouse and a security coordinator. The heads of the authorities claim that Ya’alon himself explained to them that these steps were taken in light of the “changes in the mapping of threats.”

Al-Monitor obtained a letter sent to Ya’alon by Shmuel Rifman, chairman of the Union of Regional Councils and head of the Ramat Negev Regional Council, in which he accuses the defense minister of making an “unreasonable, inappropriate and immoral” decision. “Mr. Minister, we evidently do not live in the same country,” Rifman wrote. “Since you assumed office, we perceive a worrisome process in which the state renounces responsibility for the security of the localities along the length of its borders — in the communities of the Gaza Envelope on the Egyptian border, on the northern border and the Golan. … To the best of my knowledge, the newspaper headlines in the State of Israel have not announced that peace has erupted. The opposite is true: Over the recent weeks, the Gaza Envelope residents experienced a large number of Code Red alerts.”

In the letter, Rifman wonders if “[the slashing of] the basket of security components [for the Negev], at a total of NIS 70 million [about $20 million], is enough to rescue the entire defense budget.” He signs the letter with the statement that “you and the security system have sacrificed and abandoned the security of our residents in exchange for the savings of a few million shekels.”

In an interview with Al-Monitor, Rifman continued to critique Ya’alon’s decision to remove IDF protection of the localities that are adjacent to the southern border. According to Rifman, the residents of the region have been coping with an erosion in their sense of security ever since former Egyptian President Hosni Mubarak’s regime dissolved and activities of Islamic organizations have intensified close to the border. They are concerned about terrorists infiltrating their localities and from abductions of farmers working in fields adjoining the border. Rifman tells us that activities of the Egyptian army very close to the border are clearly evident every single day, and that Egyptian helicopters circled over Israeli localities twice in recent weeks, in coordination with the IDF.

Rifman describes the misleading daily routine on the southern borderline friction zone illustrated just last week by rockets fired in the direction of Eilat Jan. 20, followed by a decision to open a front against the minister of defense. “That Ya’alon of all people, who originates from the rural-settlement enterprise (Ya’alon was a member of Kibbutz Grufit in the Arava; M.M) — that he should turn his back on the distress of [our] localities. I think that if he owes anyone an apology, it is to us and not [Secretary of State] John Kerry.”

Al-Monitor:  Did you receive an explanation from the defense minister for the decision?

Rifman:  Strangely enough, while the borders here are rife with terror, Ya’alon described to us the vision of a new Middle East, more or less. But we live here, and the security reality is harsh. Although Hamas is making big efforts to avert shootings against Israel in the Gaza Envelope, it is not especially successful. It is known that they continue to dig tunnels, and Code Red alerts have become our routine.

We had a lot of conversations with him and correspondence went back and forth between us, but we were not successful in convincing him. Our disappointment is enormous precisely because he is a settlement person like us, he is well familiar with the life-reality on the borders. And he was the one to authorize the cutback signifying the removal of the soldiers from the localities, canceling use of reinforced vehicles and other vital security elements. The residents living along the conflict line in the Gaza Envelope and along the Egyptian border, feel that their personal security has been severely damaged. And what are we talking about — NIS 70 million? That is not a huge budget.

We were by him for a discussion a few weeks ago, and strangely enough we received a lecture for an hour and a quarter about how all the changes in our sectors are for the best; in other words, that threats have lessened, and therefore the number of soldiers doing guard duty on our localities can be cut back or reduced. It was humiliating, not very intelligent on the part of the defense minister.

Al-Monitor:  Why wouldn’t the defense minister paint a true picture of the security situation? Is it not in his interests?

Rifman:  It is completely obvious that this blow has no connection with a true assessment of the situation in the Gaza Strip and Sinai [Peninsula], but only to the decision to make cutbacks. I live here and I know that the reality on the ground here differs from the picture he drew. I told him blatantly more than once that all his talk is nonsense; at the end of the day, we are the ones who live here in the territory and we see what goes on around us. Our residents continue to travel on the roads, Qassam rockets continue to fall, mortar shells drop every now and again. The bottom line is that IDF on one side, Hamas on the second side and Egypt on the third side have all been unsuccessful in bringing calm to the territory — the calm about which the defense minister speaks. And we haven’t even talked about the Egyptian border. Ask the inhabitants of the Kadesh Barnea locality what it’s like when Egyptian choppers circle above their heads — not exactly a very relaxing feeling.

Rifman:  Beyond the security difficulties are the economic problems in their wake. Until these recent events, we worked our agricultural fields up until the fence itself. In the past year, we distanced ourselves from the border, and there are now territories a kilometer [0.6 mile] deep that have become fallow land. Every locality has an emergency alert unit. People sleep with their weapons under the bed. What we want is not to live in fear, but unfortunately living without fear is not exactly the situation. I am afraid that some Egyptian sniper will fire into Israeli territory, that they’ll abduct a farmer or that terrorists will infiltrate one of the localities. Who will be to blame if that happens? Why should we wait for an investigative committee? My greatest worry is from the Gaza tunnels. Believe me when I say that I know that they continue to dig those tunnels, and that there is great danger of soldiers or agricultural workers being kidnapped.

Reaction by the Ministry of Defense

''The Defense Minister has asked to examine the issue. The examination is taking place these days. Beyond that, we regret the unnecessary and ungrateful remarks by Mr. Rifman, who receives the attention of the defense minister, and who knows to what extent the minister is preoccupied by fortifying the security of Israel and by reinforcing the settlement [localities].''