In an interview with Al-Monitor, OneVoice CEO Laura Talinovsky condemns the defamation campaign led by the My Israel group against US Secretary of State John Kerry. 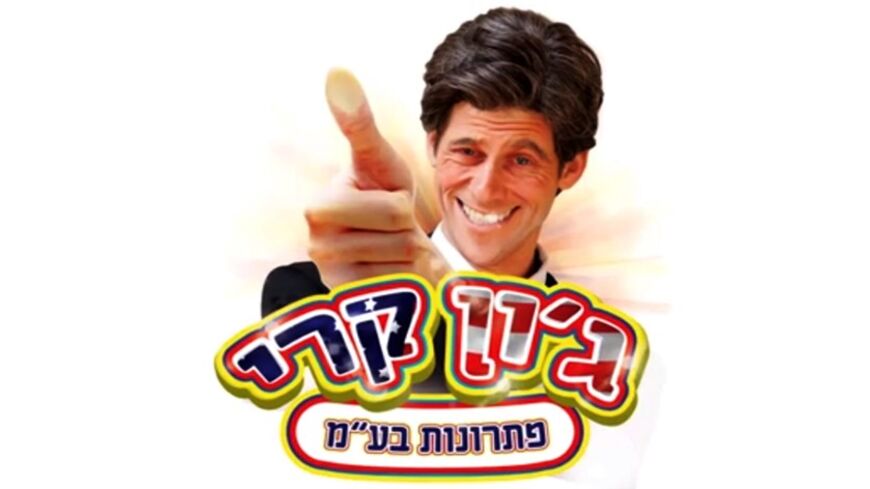 The group behind a series of brief parodies called “John Kerry Solutions, Ltd.” is the My Israel movement. - YouTube

They find it funny. A young man in glasses is sitting in the cubicle of a public restroom, looking for toilet paper. Cut. Music. A man who resembles US Secretary of State John Kerry appears in center screen and says in a booming voice: “Caught in the bathroom without any toilet paper? We have the solution. A hedgehog. Its aerodynamic shape allows you to wipe thoroughly.” The audience bursts out laughing. And the clip continues with a series of brief parodies that attempt to ridicule the US secretary of state, a man who has been working to find a solution to the Israeli-Palestinian conflict ever since he took office. The young man following Kerry’s advice in the satirical video ends up battered and homeless.

The group behind this campaign titled, “John Kerry Solutions, Ltd.” is the My Israel movement, founded in 2010 by Naftali Bennett, Ayelet Shaked, the Yesha Council (the settlers' umbrella organization) and the Benjamin Regional Council, a regional council covering 42 Israeli settlements of the West Bank. Bennett and Shaked were political activists in the nationalist camp then. Today, Bennett is chairman of the HaBayit HaYehudi Party and minister of the economy and trade, while Ayelet Shaked is a Knesset member for that party. Their goal is obvious. They want to cast the secretary of state as a naive fool, who offers stupid solutions to problems and then avoids any responsibility for the outcome. The instigators of this campaign claim that Kerry’s initiative to resolve the Israeli-Palestinian conflict will lead to catastrophe. “He doesn’t live here to pay the price for his suicidal solutions,” the spokesman of the Benjamin Regional Council explained. “We have a responsibility for the future of the State of Israel. John Kerry does not.”

But not everyone was laughing. The OneVoice movement called on Prime Minister Benjamin Netanyahu and Foreign Minister Avigdor Liberman to stop these attacks on the secretary of state. According to them, the campaign is funded by the Israeli taxpayer through moneys that go to the Benjamin Regional Council’s budget, and from there to the Yesha Council.

OneVoice was founded by businessman Daniel Lubetzky after the second intifada to advance the idea of a two-state solution. The organization’s activists include both Israelis and Palestinians whose goal is to provide a voice to the moderate majority, so as to influence Israeli and Palestinian decision-makers, including through the establishment of a Knesset lobby to support the two-state solution.

In an interview with Al-Monitor, Executive Director Laura Talinovsky said that the provocative campaign in which the Yesha Council invested considerable resources is damaging the relationship between Israel and the United States.

Talinovsky:  What we have here is an unbridled and unprecedented attack against one of Israel’s friends. It is a disgrace that the state is funding this kind of campaign through the senseless and toxic use of the Israeli taxpayer’s money.

Al-Monitor:  How exactly is the State of Israel funding this campaign?

Al-Monitor:  Don’t you think that your protests boomerang against you and only increase interest in seeing the clip mocking Kerry?

Talinovsky:  We are shining the spotlight on the government’s minister, and especially on the prime minister, the foreign minister and the minister of justice. We are demanding that they put a stop to the campaign by threatening to stop funding.

It is hard to believe that Netanyahu or one of his ministers would take any action against the campaign ridiculing Kerry. Netanyahu tends to walk gingerly whenever it comes to the settlers, and he always tries to compensate them after any move that could be perceived as a concession to the Palestinians. Consider, for example, his concessions to the settlers regarding the evacuation of illegal outposts or after the release of Palestinian prisoners. But that is not the only reason that it would be difficult for him to condemn the sponsors of this campaign or their approach targeting the secretary of state.

Netanyahu was one of the first people to describe the Obama administration as running an irresponsible foreign policy. Kerry, who headed the US negotiating team in the Geneva talks, was a convenient and easy target for him at that time. The prime minister and those close to him attacked Kerry sharply, causing a deep breach of trust between the two countries. “In contrast to others,” Netanyahu declared, “when I see that interests vital to the security of Israel's citizens are in danger, I will not be silent.'' The secretary of state did not let it pass quietly and responded in a similar fashion, very publicly, before the media. Ever since the Geneva agreement was reached over the Iranian nuclear project, US President Barack Obama and his secretary of state have been portrayed in Israel as patsies, who try to avoid conflict at all costs and who blindly follow solutions that will ultimately be found fatal.

The spat between Kerry and Netanyahu was a defining moment for the Israeli public. The image they came to have of Kerry was as someone who follows blindly after the soft-spoken Iranian President Hassan Rouhani. Now, based on the same approach that Netanyahu helped to shape, the Yesha Council is launching its own campaign, using the same tactic: attacking Kerry's reliability and thoughtfulness. The settlers’ job has never been so easy. The campaign to ridicule and humiliate the US secretary of state is following a path already paved by the Israeli prime minister. However, what Netanyahu must remember is that when the day comes and he is forced to make painful concessions to the Palestinians as part of an agreement led by the US administration, he could have a very hard time getting backing and support for such a move from the Israeli public. If that happens, it will be his own fault.