In an exclusive interview, veteran Syrian opposition figure Michel Kilo tells Al-Monitor, "If Walid Moallem will talk about terrorism, he will receive a true lecture about terrorists." 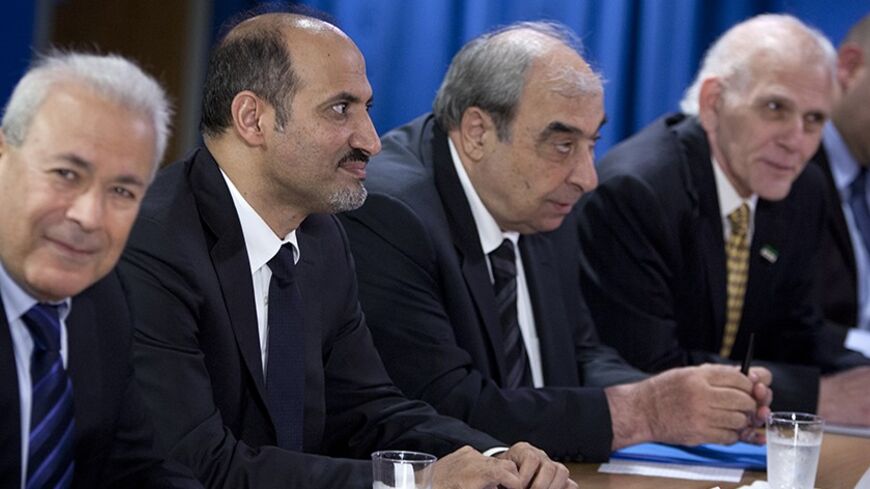 MONTREUX, Switzerland — Michel Kilo, a member of the Syrian National Coalition delegation participating in the Geneva II talks, said that the opposition is preparing its own case implicating the Syrian government in collaboration with terrorist groups including the Islamic State of Iraq and al-Sham (ISIS).

“There are photos that have been found of several emirs of ISIS with [Syrian President] Bashar al-Assad,” said Kilo, who spoke with Al-Monitor on the sidelines of the Geneva II talks.

“The pictures were taken before they became emirs in ISIS, when they were all officers in the Syrian special service. There are documents sent by the special service to ISIS telling them to capture or kidnap people in Raqqa and Jarabalus, and these documents will be published. And you will see how the regime fabricated these extremist groups that did not exist in our country at the beginning of the revolution.

“Without a doubt, we will use this as an argument during the negotiations,” Kilo warned. “We have officers who have defected from the [Syrian] special service who worked to create these terrorist organizations; people who used to work with al-Qaeda. They know the names and the dates and what they have done along with the directions they were given. All this is documented. The chief of the cabinet of [special security adviser to Assad] Mr. Ali Mamlouk defected one year ago, and he has documented this. If [Syrian Foreign Minister] Walid Moallem will talk about terrorism, he will receive a true lecture about terrorists. And you shall see.”

Kilo is a longtime Syrian dissident who was first arrested in the 1980s, during the crackdown by the government of then-Syrian President Hafez al-Assad, the current president’s father, on the Muslim Brotherhood, even though Kilo was a member of the Syrian Communist Party at the time.

Kilo, who shifted his politics to the center, rallied Syrian activists and intellectuals on several civil society and democratic initiatives during what was then known as the “Damascus Spring” after Assad assumed office following his father’s death in 2000. Kilo went back to jail in 2006 for his role in promoting the Beirut-Damascus Declaration, which called on Syria to recognize Lebanese sovereignty. He left the country in 2009 after serving a three-year prison sentence.

Asked about the Syrian government’s proposal to halt military operations in Aleppo, Kilo said, “We believe they will play a political game. Before the existence of this [transitional] political body they will say, ‘Come make a cease-fire,’ but a cease-fire was already committed to in Geneva I. It is not an object of negotiation. If there is a cease-fire and the army is pulled back from the cities, as Geneva I called for, we would respect it.”

Kilo, who joined the Syrian National Coalition for Opposition and Revolutionary Forces in May 2013 as the leader of the “Democratic Forum” to limit the role of Islamists, lamented the relative weakness of democratic forces in the Syrian opposition and the absence of representatives from the National Coordination Committee for Democratic Change, an internal opposition group, in the delegation to the Geneva talks.

“It is a problem, without doubt a big problem,” he said. “But I believe that this problem is linked to the military weakness of the democratic forces. We have always said to the Americans and the Russians: If the battle lasts a long time, this will benefit the Islamists. And the extremists will be the masters of the country. They refused this point of view; they refused to give real weapons to the Free Syrian Army, which is a democratic army. At the end, only the extremists have sophisticated weapons. And the Free Syrian Army, which was the major faction in the struggle, had no weapons.”

Kilo was pessimistic on the upcoming direct talks between the Syrian parties. He said, “The chance for a political solution is very, very small after the speech of Walid Moallem.