Former Knesset member Majallie Whbee, a close associate of former Prime Minister Ariel Sharon, deplores Israeli leaders for not seizing the moment: “We have a window of opportunity of just a few years to complete an agreement.” 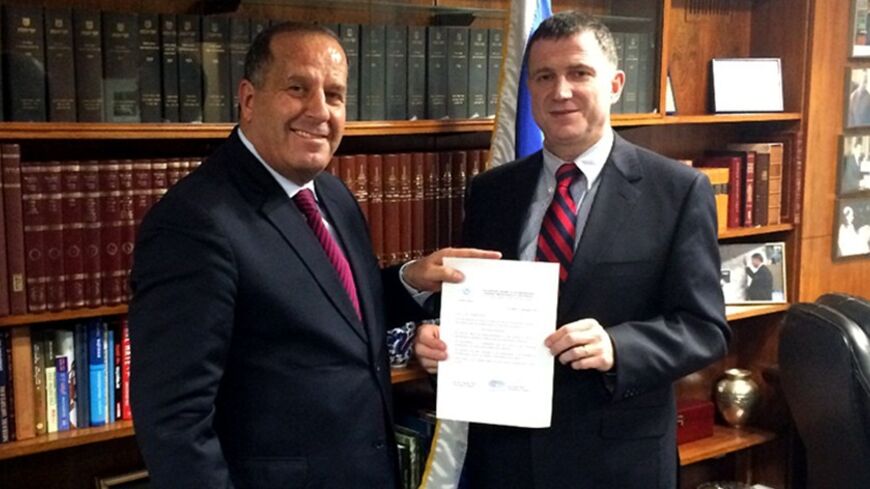 Majallie Whbee (L) is handed his letter of appointment as roving ambassador of the Parliamentary Assembly of the Mediterranean by Knesset Speaker Yuli Edelstein in Jerusalem, Dec. 31, 2013. - Knesset Spokesperson's Office

“The reason that we miss [Ariel] Sharon so much is simply because he knew how to bang on the table and decide yes or no. With Bibi [Benjamin Netanyahu], nothing is clear ... and there is no worse feeling than that.” Former Knesset member and Deputy Foreign Minister Majallie Whbee followed former Prime Minister Ariel Sharon almost blindly when he bolted from the Likud Party and established Kadima in November 2005. It was two months before the then-prime minister suffered a stroke and dropped off the public stage, leaving behind him a party in its infancy, a country dealing with the implications of the disengagement from the Gaza Strip, and an enormous leadership vacuum.

In the last election, Whbee, who was close to Sharon politically, joined HaTenua Party, headed by Tzipi Livni, but was not elected to the Knesset. He watches from the sidelines now as the glorious party that Sharon hoped to establish, and which was supposed to serve as a political platform to advance a diplomatic solution with the Palestinians, goes through all its various incarnations.

Sharon has been in a coma since January 2006, and over the past few days his condition has deteriorated considerably, putting his life in danger. The party that he founded split in two because of a serious clash between Justice Minister Livni and former Defense Minister Shaul Mofaz on the eve of the last election. At its peak, Kadima won 29 seats in the Knesset. In the last election, the party, now headed by Mofaz, dropped to just two seats. Until it is proved otherwise, Livni’s party serves as the diplomatic fig leaf for the Netanyahu government. It is a pale shadow of former Prime Minister Sharon’s political vision.

Whbee doesn’t know exactly what diplomatic arrangement Sharon intended to reach, but it is obvious to him that the disengagement plan in Gaza was to be continued somehow. “Sharon said, ‘Why do we have to rule over another people?’ He realized that in the long term, the occupation would not lead us to a good place, and he wanted to bring about an arrangement.” Like many senior members of the Likud who followed Sharon on his Kadima escapade, he thinks back now on the diplomatic momentum during Sharon’s term in office and wonders what would have happened had he not collapsed.

The interview with Whbee took place one week after he was appointed roving ambassador of the Parliamentary Assembly of the Mediterranean (PAM), alongside professor Mohamed Abou El Enein, former speaker of the Egyptian parliament. At a modest ceremony held Dec. 31, Knesset Speaker Yuli Edelstein handed him his letter of appointment. Whbee already has plenty of plans how to promote two main causes: tracking and reducing the scope of civilian casualties in Syria, and supporting an agreement between Israel and the Palestinians.

PAM was founded in 2006. Apart from Israel, its member states include Morocco, Cyprus, Libya, Jordan, Egypt, France, Greece, Bosnia, Syria, Tunisia, Turkey and the Palestinian Authority. This is the first time that an Israeli has been appointed to a senior position in PAM. Considering all the international condemnations and boycotts that Israel is facing, as well as the ongoing diplomatic crisis it is immersed in, Whbee's appointment is noteworthy.

Very soon, Whbee, a Druze, will leave his home in the northern locality of Beit Jann to engage in shuttle diplomacy between the states of the region. He will attempt to use his diplomatic, political and defense experience, as well as his moderate worldview, to promote the assembly’s objectives and to realize the common interests of the countries in the region.

Majallie Whbee, when the states of the region are contending with the revolutions and conflicts of the Arab Spring, can anyone even determine what their common interests are?

“First of all, there is an interest in the Syrian issue. It is in everyone’s interest to defend the civilian population. Our objective is to flood the world with the problem and to put it on the tables of Europe’s leaders, now that the United States abandoned its plans to attack. What we have here is a Middle East population without anyone to care for it, and it is still at risk. There are Syrian representatives in PAM, too, and that is an advantage. While they are excluded from most places, they are still members of our assembly, and through them we can have an impact. We will demand that they use their influence over the Syrian regime.

“But it is not limited to Syria. The situation in Egypt is also difficult. The Egyptian representatives to PAM warn us of the risks posed by Hamas and the [former Mohammed] Morsi government. They are opposed to religious extremism, so they regard Morsi, who supported Hamas, as acting against Egyptian interests. In that sense they regard us, the Israelis, as their allies.”

Has your appointment already provided you with new insights into the region?

“Yes — that the Arab Spring was exploited by the religious extremists to seize control of the region in a kind of effort to establish a large Islamic force that will extend over several countries. We witnessed the cooperation between Morsi and Hamas, while those forces with a pro-Western orientation fell between the cracks. In that sense, I consider [US President Barack] Obama turning his back on Egypt to have been a resounding slap in the face. Unfortunately, the West did not anticipate fundamentalist factors attempting to hitch a ride on the Arab Spring.”

There is an argument that the chaos in the Arab states will actually improve Israel’s security situation.

“That is true in the short term. In the long term it is catastrophic, because it is possible that the fundamentalists will take over, and that would pose a threat to us. This leads me to the Palestinian issue. We have a window of opportunity of just a few years to reach an agreement, and Israel is not exploiting that window of opportunity. The situation is that right now the Palestinians do not have the backing of the Arab states. Egypt isn’t helping with anything, and Syria is torn apart. Under these circumstances, it is possible to pressure the Palestinians. [US Secretary of State John] Kerry should bang on the table and bring about an agreement. He should determine the facts and put both sides in a situation in which they have to decide. That is his role as a mediator, because if there won't be an agreement we will be living by our swords here for many years to come.”

The situation of the Palestinians actually seems better than our own in the international arena.

“In my opinion, it is important to distinguish the leadership, which wants the conflict to continue. It’s good for those people to be the side that is discriminated against in the conflict. What’s so bad for them? They fight, and somebody else pays. But unlike the leadership, the people want to live a normal life. They want to make a living and improve their quality of life. They are tired of all the struggles and wars. They want normalcy. That is also why I don’t think there will be a third intifada. There is no one who wants to fight that battle, because even the Palestinian mothers are tired. After all, who do they send to blow themselves up with suicide belts? [Palestinian Chairman] Abu Mazen’s sons? [Former Palestinian Chairman Yasser] Arafat’s sons? It is the simple people who struggle to make a living, who end up paying the price.

“What’s so bad for the leadership? They continue driving around in their Mercedes and living in mansions, with tight security to protect them. It is convenient for them for the situation to remain as it is, because once a peace agreement is signed and they will be under supervision, it will be hard for them to keep up that kind of lifestyle.”

Was Sharon’s disengagement plan a mistake?

''In my opinion it was a stroke of diplomatic genius. After all, we had five brigades there, the security costs were astronomical, and soldiers were getting killed and wounded to defend 23 settlements. How was that to our advantage? As soon as Israel left Gaza, the international community granted us legitimacy to act in our defense from within our borders.”