Labor Knesset member Hilik Bar has presented a bill against annexing any territories within Judea, Samaria and Gaza, heading off a proposed annexation of the Jordan Valley. 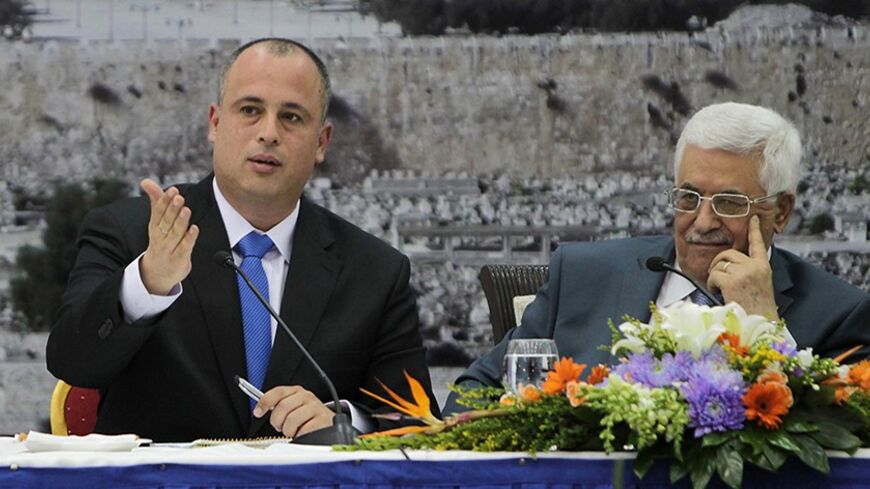 Israeli parliament member Hilik Bar (L) gestures as he sits next to Palestinian President Mahmoud Abbas during a meeting in the West Bank city of Ramallah, Oct. 7, 2013. - REUTERS/Abbas Momani

The Israeli political center and left are at the height of a defensive holding battle with the right wing, which is trying to put up obstacles to prevent any transfer of land to the Palestinians within the framework of a diplomatic agreement. At the center of the ideological argument is the idea of the two-state solution, on which all Israeli governments have based the frameworks of their negotiations with the Palestinian Authority since the 1993 Oslo Accord.

The leaders of the right wing and the settlers of Judea and Samaria present two central arguments against the establishment of a Palestinian state in the territory of Judea and Samaria, most of which Israel would be forced to evacuate in such a plan. The first claim is that since the start of the settlement enterprise in the West Bank in the mid-1970s, facts have been established on the ground that preclude the evacuation of more than 300,000 Israelis, and no solution is feasible.

The second claim, occasionally raised as well by Prime Minister Benjamin Netanyahu and his government ministers, is that there’s no partner for peace on the Palestinian side. Their conclusion is that if there’s no one to talk to, and there’s no significant chance of arriving at an agreement and Israel should seek other solutions, such as a bi-national state.

The struggle over Israel’s red line regarding the compromises it is willing to make in a permanent agreement is now becoming a fundamental dispute between the supporters of the two-state solution and its opponents — between those who see the establishment of a Palestinian state alongside the State of Israel as the only practical solution for ending the conflict and those trying to scuttle any territorial compromise and evacuation of settlements.

On Dec. 29, against the backdrop of this struggle, a ministerial committee approved a bill proposed by Likud Knesset member Miri Regev for the annexation of the Jordan Valley, one of the toughest core issues in negotiations between the Israelis and the Palestinians. Next week, Knesset member Hilik Bar of the Labor Party will promote a counter proposal: legislation that accords statutory status to the idea that has faded.

Bar heads the Knesset lobby for resolution of the Israeli-Palestinian conflict, which numbers 40 members from various centrist and left-wing Knesset factions. Bar says he tabled his bill more than 45 days ago, but decided to promote it now because of what he calls “the madness of annexing the Jordan Valley.”

“Annexation is a death blow to the two states-two peoples [solution],” he tells Al-Monitor. “The two-state bill that I initiated determines that Israel will not annex lands in Judea, Samaria and Gaza, and their future will be determined only within the framework of an agreement and the resolution of the conflict.”

Has the principle of two states lost the support of many segments of the Israeli public, or only of the right?

“The principle has lost support among many segments of the population, to a certain extent because of the Palestinians, mainly the events in Gaza — the firing of Qassam rockets on Israel and the refusal to recognize us — but also to a large extent because of the Israeli leadership. Our side teaches the Israeli public that there’s no partner for peace and no justification for compromise, and therefore Israelis think that the best thing is to hunker down and not to compromise, and to keep a strong finger on the trigger.”

How do you respond to the claim that facts have been established on the ground which prevent implementation of the idea?

“I totally disagree. The facts on the ground are solvable. Anyone who says that the number of settlers and the settlements in which they live are an impassable barrier wants you to believe this in order to preclude an agreement. It’s a sort of self-fulfilling prophecy.

“The truth is that the settlers number between 350 and 400 thousand, and they can be divided into four groups. The first are those living in the settlement blocks, who will remain in their homes in what will become Israeli territory, for which we will pay with land swaps. The second group is fairly large and consists of those who moved to the settlements for affordable housing, including friends of mine from the political center and left wing who said ‘To hell, with it, I can’t buy an apartment in the center or in Jerusalem, so I’ll buy in the territories.’ There won’t be any problem evacuating them. They will gladly go back to lands inside the State of Israel once it compensates them and resolves their housing issues. The third group is the hard ideological core, and it can be divided into two: those who will shout and demonstrate but will accept the decision to evacuate, and those who will not. Anyone objecting to evacuation will be able to stay and live on Palestinian territory.”

Does your proposal stand a chance of Knesset approval?

“Of course not, the coalition will force its people to vote against it.”

So you are shooting yourself in the foot. You’re creating a situation in which there’s support for annexing the Jordan Valley and no support for two states.

“I’m providing Knesset members with an opportunity to express their views and show their true face. In the end, the government will say that the Knesset cannot interfere in annexation or non-annexation issues and will vote down my bill as well as that of Miri Regev’s.”

In the meantime, even before Bar’s proposed bill comes up for debate, opponents of the two-state solution were given an additional boost by Netanyahu. At a Jan. 2 news conference with US Secretary of State John Kerry, on his 10th visit to the region since taking office, he once again heard the same familiar tune that the chairman of the Palestinian Authority is not a partner.

“A few days ago in Ramallah, President [Mahmoud] Abbas embraced terrorists as heroes,” said Netanyahu, describing the reception accorded by the Palestinian Authority to the prisoners that he himself decided to release as part of the negotiations. “The people of Israel and I are prepared to make such a historic peace. But we must have a Palestinian partner who's equally prepared to make this peace.''

So will a majority be found to back a diplomatic arrangement based on the two-state solution? Not under the current conditions, when the prime minister himself keeps spreading grave doubts among the Israeli public.