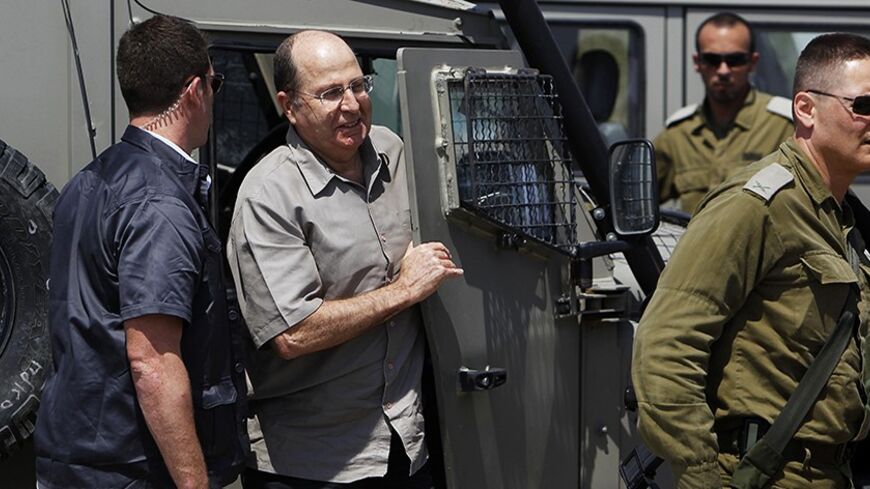 Israeli Defense Minister Moshe Ya'alon (2nd L) gets out of a military jeep during a visit to an army base near Kibbutz Kissufim outside the central Gaza Strip, May 7, 2013. - REUTERS/Amir Cohen

What was expected did actually happen.

When US Secretary of State John Kerry undertook his mission to handle the Israeli-Palestinian conflict each time Israel would announce its determination to build more settlements. This exercise of “negotiating” followed simultaneously by more settlements constitutes a pattern that has been introduced since the Oslo Accord. It is now undertaken in a much more sustained manner. Israeli Defense Minister Moshe Ya’alon provided in a crude language that so-called “negotiations” and “framework agreement” proposed by Kerry is thus treated as an interruption, which delays and perhaps stifles Israeli objectives.

The apology expressing “regret” concerning the provocative denouncement did not negate the substantive motivation and policy for his outrageous expressions.

I think that Kerry’s pursuit is well-intentioned, but unfortunately flawed because he has not extracted recognition from Israel that it is an occupying power. The absence of a clear legal definition renders “negotiations” futile. Israel considers itself unaccountable to the forth Geneva Convention, but as a claimant to retrieve historical and ideological rights besides its definition of national security.

The fault that explains Kerry’s mission is that his legal department has never clarified the legal base in order that negotiations be consequential and result-oriented.

This explains that the zeal with which Kerry pursues this mission, while sincere, but with an undefined legal base, enables people such as Ya’alon to view it as a crude interruption in what Israel seeks.

Ya’alon's statement represents the substance of Israeli Prime Minister Benjamin Netanyahu’s policy. Of course, Netanyahu would have preferred that Ya’alon expressed himself in a more subtle, sophisticated manner.

I am sure many in Israel are aware that such policies undertaken by Israel continue to elicit international condemnation and is being perceived as definitely indifferent and oblivious to any recognized right of the Palestinians for a sovereign, independent state. This is why if  Kerry wants, as I think he does, a successful outcome, he must a priori get a clear commitment from Israel to define itself as an occupying power. Otherwise, it will take much more than frequent flying to Israel to bring about either a “framework” or a resolution!

If that public acknowledgment by Israel is not forthcoming that it is an occupying power then, I think, the US administration should not keep preventing — as it continues to do — the Palestinian Authority from resorting to the UN General Assembly resolution in November 2012 that “Palestine is a state under occupation.”

This recognition by the UN is the equation upon which consequential outcome can be achieved.

I recognize that the United States would be reluctant to abandon its sole role of dealing with the Palestinian question.

It's paradoxical that official State Department spokesmen frequently describe settlements as “illegitimate.” A question arises: Why do they not say that they are illegal? Obviously, if the settlements are illegitimate, as the US administration declares, why is it not translated into policy?

In other words, what is the reason that prevents the United States to state what it considers “illegitimate” to be illegal? When this linkage is done and the question is answered, the US policy on this particular vital issue for justice and peace in the region becomes clear; and the prospects in this case for Kerry’s pursuit of peace would have a far better chance.