The Hamas government in Gaza has failed to take serious steps to address problems facing the youth. 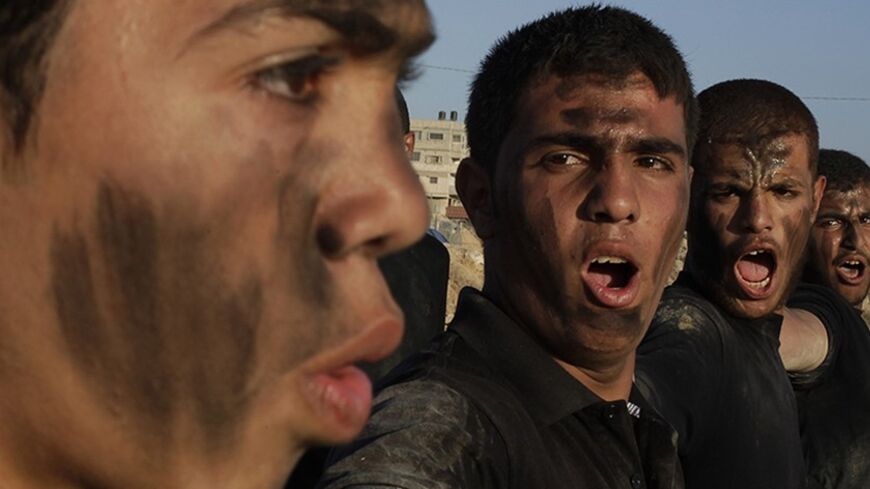 The story did not start Jan. 10 when R.B., a young Gazan, tried to jump off the roof of his house in Rafah city and threatened to kill himself if he was not allowed to meet with Prime Minister Ismail Haniyeh to state his demands. The story began years earlier, as the youth living in the occupied Palestinian territories faced mounting frustrations. According to a 2013 a report by Sharek Youth Forum, youth make up 29.8% of residents of the Palestinian territories, while a quarter of them live in poverty and a third are unemployed.

With the successive crises, the youth found no other alternative than social media pages, which became emergency rooms to tackle them. Activists believe that the first solution should be to separate the Ministry of Youth from the Ministry of Sports, which are currently combined into a single ministry led by Minister Mohammed al-Madhoun, who is also the culture minister.

Young Mohammad Hasna was among the first people who demanded this separation, and some accused him of being after the position of youth minister. He asked Al-Monitor, “How can we take care of the youth when we have a weak budget divided over three ministries and only six employees charged with the duties of the Youth Ministry?”

Hasna demanded the establishment of a Higher Youth Council to replace the ministry, headed by a young person of most 35 years. He also called for establishing a bank that empowers the youth through providing local funding sources. For instance, the ministers and the members of parliament would donate an entire month’s salary to solve several youth problems regarding job opportunities, marriage expenses and houses.

Young writer Yousri al-Ghoul agrees with Hasna. “The Youth Ministry should not only be separated from the Ministry of Sports, but also from the Culture Ministry. It is very unjust to mix the affairs of youth, culture and sports, knowing that there is funding allocated for sports alone,” he told Al-Monitor. “Since when does a person who knows Faulkner and Marquez know Messi and Ronaldo?”

According to Hasna and Ghoul, Madhoun manages a non-governmental organization and supervises some theses for graduate studies, in addition to handling the three ministries. This violates Palestinian law, which does not allow individuals in political positions to hold other jobs.

In response, Sports Director General in the Ministry of Youth and Sports Mahmoud Baroud told Al-Monitor, “We know that the budget for youth is very low, especially since the Gaza government does not consider the ministry an essential one, contrary to other ministries, such as health and education.”

Baroud refused to give the allocated budget for the ministry, but he clarified that it does not meet the high expectations of the youth, who expect the ministry to provide jobs, marriage expenses and food.

“The Youth Ministry has achieved a lot despite the lack of capacities and the presence of only six employees,” he added.

The manager of Madhoun’s office, Mohammed Halas, spoke to Al-Monitor on behalf of the minister. “The budget of the Ministry of Sports and Youth amounts to $250,000 [per year]. The Youth Ministry’s share is $90,000. Moreover, if the ministries for youth and sports were separated, the budget would decrease. The Culture Ministry is considered a completely separate financial and administrative structure,” said Halas.

Halas indicated that it is difficult to operate the development ministries, as the government is suffering from a crisis that makes it necessary to prioritize relief needs.

“Despite the lack of capacities, projects to support the youth were carried out. The marriage fund, which has helped thousands of young people from diverse backgrounds, was one of these projects, as well as the Youth Training Center, which trained thousands. We have also established the Fraternity Youth Camp for youth activities, and we have introduced the youth and scouts draft laws to the parliament. We have also licensed more than 100 youth centers and offered them support,” he added. Halas pointed out that Madhoun is not in fact serving in several positions, and noted that he has resigned from the board of directors of the Ibdaa Association.

Halas said that the minister responded to the requests of young people on social media sites and decided to establish a Youth Advisory Council, which will influence the drafting of decisions in the ministry.

Al-Monitor’s correspondent posed a question on the Power of Youth Facebook page about the group's take on the potential advisory council. The answers differed, and most of the respondents believed that the council beats around the bush and will not fulfill their expectations.

Fatima Abdullah, 27, responded on the Facebook page by saying, “The youth need a real chance, not an illusory one. We also need an advisory youth board related to the rule’s higher decisions, and we need to separate the Youth Ministry from the other ministries. Moreover, there should be young blood in the ministry, since 50 and 60-year-olds will not understand the desires and interests of the youth.”

Badreddine Badr, 30, withdrew his candidacy for the council’s elections because he believes that the number of those who elect the council should be equal to the number of youth in the Strip, a figure that exceeds half a million. This is not the number specified by the ministry, which is 196.

Only a few days after the controversy, the Palestinian Cabinet sent out invitations to young men and women to meet the prime minister on Jan. 12, 2014.

Ghoul believes that the meeting with Haniyeh came as an attempt to contain the youth, given the blockade the government is suffering from. “I guess Abu Mazen [President Mahmoud Abbas] would easily hold a similar meeting due to his negotiation dilemma,” he added.

Al-Monitor’s correspondent attended the preparatory meeting for the Haniyeh meeting in the headquarters of the youth cultural forum. Youth of many different orientations were in attendance.

During the meeting, Hiba Dirawi, 28, suggested bringing up the absence of youth participation in setting a development plan for the current year, and young people's right to representation in local committees and all ministries. Meanwhile, Bilal Rayan, 29, stated that it's more important to demand freedom for local activists instead of oppressing them. Rashad Abu Moudallala, 28, focused on the issue of discrimination between youth based on political orientation when it comes to jobs and services.

Only a few hours after the preparatory meeting, those invited received a message that said: “Since Prime Minister Haniyeh is preoccupied with urgent engagements, his bureau declares that the scheduled meeting with the youth will be canceled. We hope to schedule another one soon.”

This postponement stirred anger on Facebook. Aside from the civil defense staff convincing R.B. to come down, nothing has changed. He, too, has yet to meet the prime minister.