Iranian funds for Gaza's cultural, education and sports scene have withered due to the fallout with Hamas over Syria. 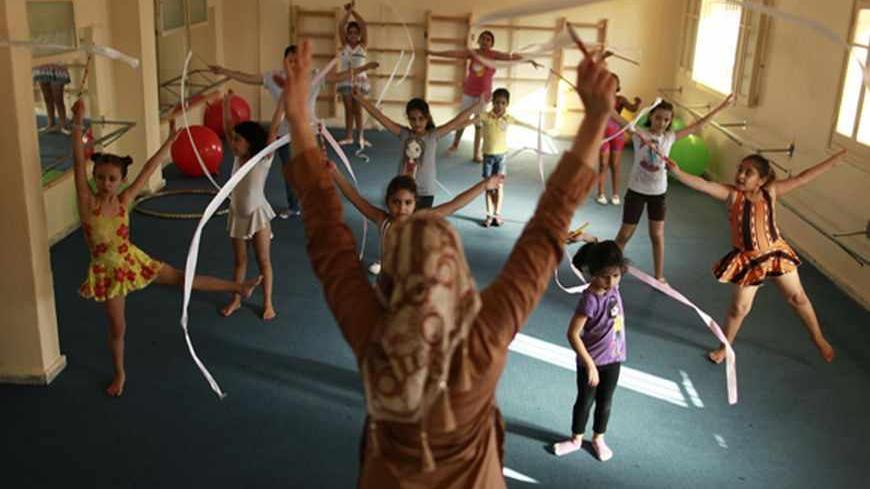 Iranian aid for Hamas in the Gaza Strip has declined. International agencies had estimated Iranian aid at $20 million a month. The decline in Iranian aid has had a noticeable impact on cultural, sports and social projects that Iran used to support with a little bit of competition from Qatar, which has become the top aid provider for Hamas. The Qatari grant for the reconstruction of Gaza was estimated at $407 million in 2012.

Al-Monitor met with Finance Minister and Deputy Prime Minister Ziad al-Zaza. When asked if his government was receiving Iranian aid, he denied that his government had received support from any country.

In an interview at his Ministry of Finance office [June 17], Zaza said, “We do not get any support from any government in the world. But we receive support from our friends, our Arab brothers and from the free world.”

In response to whether his government had Iranian friends who supported it, he said, “Iran is a Muslim sister state like all Arab and Muslim countries. ... There are individuals [who support us] in Iran, like in all Arab countries and the free world. That kind of support is still ongoing but it is minor. We are talking anywhere between $5 million to $12 million a month. I have been in the government since 2006 and nothing has changed.”

Al-Monitor took a look at government-sponsored cultural, sports and youth projects in the Gaza Strip.

He said that the only current Iranian-supported project is the production of a film titled “22 Days,” written by Hamas official Mahmoud al-Zahar. The film will be shot in Lebanon and is about the 2008-09 war on Gaza. Aeraar stressed that there is an ongoing cooperation between the Iranian Ministry of Culture, the government in Gaza and the Hamas cultural department, which is headed by Zahar. The Hamas cultural department is producing the film and has begun marketing it.

Al-Monitor obtained a copy of the memorandum of understanding between the Iranian Ministry of Culture, the Palestinian Ministry of Culture in Gaza and the Hamas cultural department. The memorandum calls for “cooperation between the two countries to establish educational camps, conduct youth exchange programs for training, conduct movie production training rounds in the two countries and perform scientific and cultural festivals.”

The memorandum also states: “Both sides declare their readiness to (1) conduct film festivals — in Tehran and Gaza — about Palestine, Jerusalem and the intifada; (2) establish centers of Iranian studies in Gaza and centers for Palestinian studies in Iran; (3) establish bilateral relations between the film unions in both countries; (4) support Palestinian film production, especially about Jerusalem; (5) start working for the establishment of forums that spread the resistance culture and delegitimize Israel; (6) translate Iranian works into Arabic and Palestinian works into Farsi, and distribute them; and (7) establish cultural institutions, equip libraries in the Gaza Strip and establish a cinema complex and a museum to commemorate the Palestinian resistance.”

The memorandum, which was signed in September 2012, was valid for five years and could be renewed if there are no objections. It could be abrogated by a formal request by either party.

Asked whether the memorandum of understanding was implemented, Aeraar said that it has been frozen, even though Iran had provided support for cultural projects in the past. Iran invited Palestinian officials to participate in a number of film festivals and trained technical personnel. This is what happened for the first Hamas-produced film. The same was being planned for another Hamas-produced film about the kidnapping of Israeli soldier Gilad Shalit. Zahar wrote its screenplay. Aeraar clarified that some of these activities and projects were supervised by the Islamic Cultural Center in Gaza.

The memorandum of understanding was signed in Iran in the presence of Culture, Youth, and Sports Minister Mohammad al-Madhoun and Zahar. The latter is close to Iran, where he is nicknamed “the father of the martyrs.” Analysts said that the purpose of the visit was conciliatory because the visit by Prime Minister Ismail Haniyeh in February failed to repair Hamas-Iranian relations, which deteriorated after Hamas leaders left Damascus.

Aeraar saw it likely that the stalled projects would soon be supported by the Qatari Ministry of Culture, although he was still optimistic that the Iranians would resume their support now that the presidential election is behind them.

Iranian aid used to be the largest foreign aid for the Gaza government and affected all areas of daily life for Gaza citizens.

The head of the Palestinian Youth Support Fund, Ahmad al-Mashhawari, whom Al-Monitor met in his office, said that the fund provides loans for young people who want to get married, write scientific research, attend graduate school or buy a house. The fund has helped more than 900 young people by giving them a loan of $2,000 each. The fund was established by the Palestinian prime minister in 2007 and has about $1 million available for eligible applicants.

Mashhawari said that the fund is suffering from a deficit and a dearth in beneficiaries. He said that the problem may be in the procedure for receiving the money pledged by some countries such as Iran. So far, the fund has only received $40,000 from Iran.

The director of the Department of Youth and Sports, Nabil al-Aawajah, told Al-Monitor that Qatar and Iran are competing to support the sports sector. Qatar has opened up to Gaza and is contributing human and material resources. Iran, on the other hand, is supporting infrastructure and training personnel, as it used to organize scout camps in the past. He said that his ministry places no conditions on Qatar or Iran and pointed out that Turkey also has started supporting projects two years ago.

He added, “Qatar is playing a major role in supporting sports clubs and building the stadium that was destroyed in the recent war; Qatar is providing $1 million. Before that, Iran used to be the main supporter since 2007. But things changed because of the volatility of the political atmosphere.”

Zaza said that those projects are not that important because of the drop in Iranian support, which he insists has become nonexistent. He told Al-Monitor that if a country pledges support but never delivers, it cannot be counted as support. He said that all international agencies provide support for infrastructure projects in the Gaza Strip and the West Bank, but that doesn’t mean that the Palestinians are controlled by these institutions.

During Al-Monitor’s previous meeting with Aeraar at the Ministry of Culture, he repeatedly suggested that the Islamic Cultural Center served as a supervisor of some projects for the Iranian government or stood in the place of an Iranian consulate. But the center’s website and offices do not give the impression that it is a foreign entity. A member of the center’s board of directors, Fayez al-Hussni, asserted to Al-Monitor that portraying the center as an Iranian consulate is inaccurate and a distortion. He explained that receiving previous Iranian support to conduct projects does not make the center an official Iranian body.