Outrage flared in Tunisia when 15 infants died at a state-run hospital after they were given formula later found to contain bacteria. 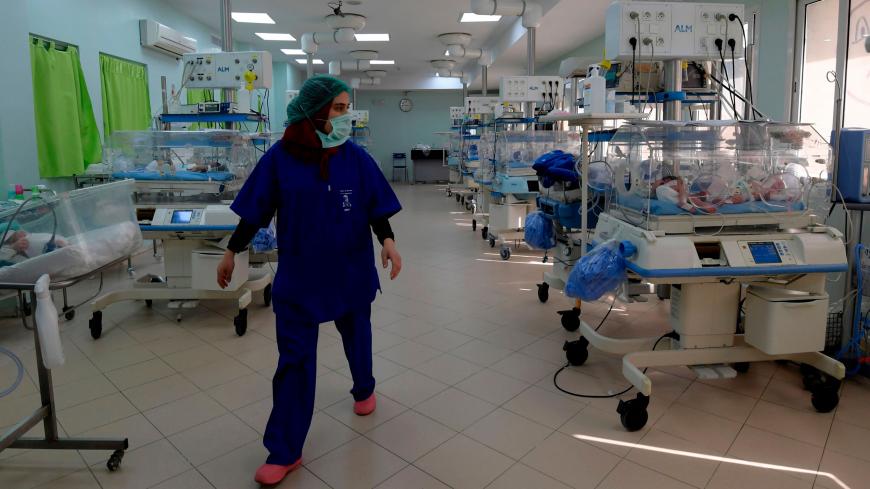 A nurse checking on babies inside incubators at the maternity ward of the Rabta Hospital in Tunis, Tunisia, March 11, 2019. - FETHI BELAID/AFP/Getty Images

TUNIS, Tunisia — The Tunisian government fired 13 health officials after 15 infants died earlier this month at a state-owned hospital. A Ministry of Health investigative committee determined the babies died of complications from sepsis and blamed human error for bacteria being introduced during formula preparation or storage in the obstetrics department at Rabta Hospital.

Even as the ministry promised improvements, dozens of Tunisians and civil society activists protested March 12 in front of the government palace in Tunis, blaming officials for the deaths and seeking an accounting for the country's collapsing health system.

The protesters clashed with a security force that prevented them from nearing the palace. They raised cardboard boxes in a symbolic message to the Ministry of Health. The bodies of the infants had been handed over to their families in cardboard boxes, a move that angered the public.

Minister of Health Raouf al-Sherif resigned March 9 in an attempt to buffer people’s anger, while Prime Minister Youssef Chahed decided to dismiss 13 other officials, including three directors-general: Nabiha al-Boursali of the Health Ministry, Hayat al-Thabet of the hospital's obstetrics department, and Sanda al-Bahri of the National Drug Control Laboratory.

Meanwhile, in a March 14 statement, the Ennahda movement, which is part of Chahed’s government, called for “expediting the appointment of a minister of health who tackles pressing issues and takes suitable measures to preserve Tunisia’s reputation as a destination for hospital and medical services.”

Hundreds of young doctors in Tunisia launched a wide social media campaign to expose the situation of the health sector and to pressure the government into carrying out radical reforms.

In a March 17 statement, the General Union of Doctors, Dentists and Pharmacists sounded the alarm regarding “the health situation after the death of the infants,” calling on the public to “launch a war on the rampant corruption in public health and to fight the corruption lobbies exploiting profit from the sector.”

Doctors used a French hashtag that translates into #Expose_Your_Hospital as part of a campaign aimed at sharing shocking images of the deteriorating infrastructure in Tunisian hospitals and the major lack of logistic and material resources, in addition to the failure to meet minimum standards for protecting patients' health and safety. They blamed the government for these shortcomings.

Ziad Bawqra, a member of the Tunisian Organization of Young Doctors, told Al-Monitor the campaign aims to pressure officials in the government and especially the Ministry of Health, and warn them of the country's health-sector hazards that resulted in the infants' deaths.

He said the group won’t stop at protests; it will also offer suggestions and raise demands related to reforming and restructuring the health system.

Bawqra mentioned three issues that should be addressed, including digitizing administrative and patient records in public hospitals to allow transparency in all transactions.

Second, he proposed drafting a book of conditions related to public tenders related to hospitals and medical equipment. He also stressed the need to monitor those in critical positions, especially department heads, and to apply competence criteria and standards, rather than favoritism, in filling these positions. Bawqra warned Tunisian authorities that dismissing key ministry officials isn't enough to reform the health sector.

If the government fails to respond to these demands, the Tunisian Organization of Young Doctors will stage protests in the coming weeks, Bawqra said.

In a statement March 9, the organization blamed the infants' deaths directly on the Health Ministry and prime minister. "We call upon all of our doctors to unite against any attempt by the authorities to involve them in this tragedy or make them scapegoats to cover up for the crime of the government against the health sector and people," the statement read.

During a surprise visit March 13 to the Ministry of Health, Chahed asserted that the health sector cannot remain as it is. He underlined the need to implement an emergency plan to rescue the sector.

Nofal al-Samarani, a member of the investigation committee, told Al-Monitor the Ministry of Health began launching an emergency plan to keep such a tragedy from happening again. The ministry shut down the room where infants’ food is prepared and is using another room with high safety and sterilization standards.

He noted all departments have increased supervision to oversee the standards of cleanliness and health by assigning a control team periodically for all recovery units.

Samarani added that the ministry is launching an action plan in several stages to replenish the health sector and overcome the gaps.

Opposition parties blamed the current government for the infants' deaths. In a statement released March 10, the Democratic Patriots’ Unified Party accused the ruling coalition of abandoning its responsibility for providing social services to citizens.

The party said the health minister's resignation was insufficient and called for the government to resign collectively.

The National Anti-Corruption Authority, an independent constitutional commission, had warned in 2016 about rampant corruption in the health sector and offered recommendations for fixing the sector. Mohammad al-Iyadi, a member of the authority, told Mosaique FM March 12 that since then, the commission has signed agreements with the Ministry of Health to activate a national strategy against corruption in the health sector, specifically in governmental hospitals.

He underlined that the authority has referred several corruption issues in the health sector to the judiciary in the past, many of which were related to manufacturing and selling medication.

While civil societies and the Tunisian Organization of Young Doctors continue to pressure the government to reveal the results of investigations into the infants' deaths and to call out those responsible, the health sector in Tunisia remains in dire need of structural reform to save it from collapse.