Some sick patients in the Gaza Strip have reported that Israeli security officers offered to exchange travel permits for information. 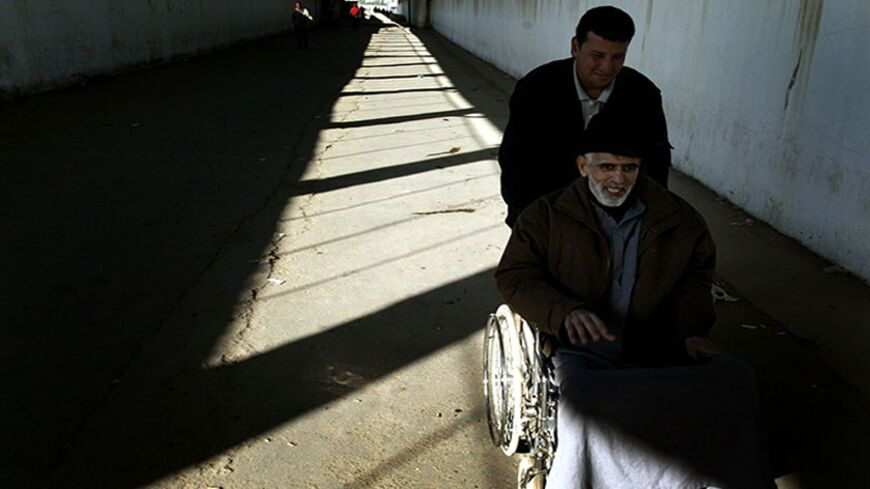 A porter pushes an elderly Palestinian cancer patient through the Erez crossing between the Gaza Strip and Israel, March 21, 2004. - REUTERS/Goran Tomasevic

Fadi al-Katshan, from the Gaza Strip, underwent a critical vascular surgery at the Israeli Tel Hashomer Hospital in May 2013. A ventricular assist device (VAD) was installed in his heart, and he was supposed to return later for a medical consultation. The operation was successful, and Katshan returned to his family in the Gaza Strip in good health. He tried to get a travel permit from the Israeli authorities for a medical consultation four times, but he was unsuccessful. Not long thereafter, on Nov. 16, he began feeling strong chest pains and died at age 26.

Katshan’s story seems to resemble the stories of dozens of patients who die as a result of the blockade on Gaza’s border crossings. Yet, his story stands out because an Israeli intelligence officer called Katshan after the first request for a travel permit was rejected. The officer said, “Fadi, we know that there’s a device in your heart that might explode any minute. That is why we will not give you a permit unless you cooperate with us.”

Ali al-Katshan told the story of his son’s ordeal with blackmail by the Israeli security services. In an interview with Al-Monitor in the family’s modest house in the Nuseirat refugee camp in the central Gaza Strip, he said that his son was diagnosed with Takayasu’s arteritis, a critical heart condition. Katshan was transferred to the Al Maqased Hospital in Jerusalem in December 2012. After his diagnosis, he was moved to Al Mizan Hospital in Hebron, then to Tulkarm Hospital and finally arrived at Tel Hashomer Hospital.

His father added, “He underwent a successful surgery [at Tel Hashomer] and then spent time recovering in the West Bank. Then, he returned to Gaza in better health, with a VAD in his heart. His medical consultation was scheduled for July 5, 2013, but the occupation refused to give him a travel permit to enter Israel.”

At that point, Fadi’s younger sister Hanine interrupted to clarify that a week after the rejection, he got a weird phone call.

“My brother talked on the phone in front of us, and the caller introduced himself as an Israeli intelligence officer. He said they knew that there was a device in Fadi’s heart, and it could explode at any minute. He also told my brother that they wouldn’t allow him to return to the hospital for his consultation unless he cooperated with them and met them at the Erez crossing. Then, the officer said, 'See you in Tel Aviv,'” she explained.

Fadi’s mother Zana added, “I heard the officer who was talking. He spoke Arabic very well, and he knew about my son’s health condition. He told Fadi that he could call him anytime to accept the offer, as his number showed up on his mobile phone. He told Fadi that he would not get the travel permit otherwise. Fadi hung up and deleted the number.”

She noted that when her son erased the number, it seemed like she was watching him die slowly before her eyes, especially since he had already asked for the entry permit to Israel three times. The hospital gave him three different appointments, but he could not make it to any of them.

Fadi’s father continued, “We then knew that the Israeli officer had implemented his threat, and my son knew that he would never travel again to get a consultation. It was difficult for any local hospital to follow up on his condition since it was critical.”

At that moment, Fadi’s mother started to cry and said, “He used to love life and had hopes for a brilliant career. He wanted to save us from our poverty, especially since he is the only one among my sons to finish his university education. I remember the day he died. He had just returned from Gaza City, where he was looking for a job. He felt an acute twinge in his heart and told us that the device was seemingly not working well. Then he vomited, slightly leaned his head backward and died in the heat of the moment on Nov. 16, 2013.”

In the context of patients being blackmailed by the occupation forces, lawyer Mohammed al-Elmi, from the Palestinian Center for Human Rights, said that the Erez border crossing has turned into what looks like a trap to blackmail and arrest patients, or their companions, who have received a medical referral from the Ministry of Health of the Palestinian Authority. The referral is called a “Model 1” and is for medical treatment in the West Bank or Israel.

“The center has recorded several cases of patients who were detained by Israeli intelligence for interrogation at the Erez crossing and who were blackmailed into providing information about their relatives or about others,” Elmi added.

Speaking to Al-Monitor, he warned that once the patient submits a complaint, the center takes action with the authorities — and the humanitarian center at the Erez crossing in particular — to track the status of the patient or lift the security ban in the event that his/her permit has been refused.

Elmi confirmed that in the case of arrest of a patient, the Palestinian Center for Human Rights sends complaints to the Israeli Prison Services, the Association of Doctors for Human Rights, the People's Committee Against Torture and the Israeli attorney general. These complaints include information on the status of the patient's health and a demand to release or transfer him to a place that fits his condition.

There are patients who were immediately transferred by Israeli intelligence from the Erez crossing to prison, as happened with Iyad Dawwas. Iyad's brother Ashraf told Al-Monitor that Iyad had been “diagnosed with cancer in his foot bone, and he left Gaza to receive treatment at the Al Maqased Hospital in Jerusalem on Nov, 24, 2011. Israeli intelligence took him for interrogation at the Erez crossing, and he has been behind bars at the Ramon Military Prison ever since.”

Iyad al-Bazam, director of the Information Bureau at the Ministry of Interior, told Al-Monitor that the Israeli occupation takes advantage of the inferior care provided by hospitals in the Gaza Strip and the hospitals' lack of capabilities by trying to trap patients into cooperation schemes.

“When a citizen goes to the Erez crossing for the first time, he has to meet Israeli intelligence, where he or his companions may face blackmail attempts,” Bazam added.

Bazam said the Ministry of Interior in the Gaza Strip meets with patients and their companions before and after their travels with the aim of raising awareness. He added, "There is a small percentage [of Gazans who become] collaborators and fall into this trap.”

The Palestinian Center for Human Rights says eight patients were arrested at the Erez border crossing between January and mid-November 2013. This is a violation of the right of movement, and a cruel sentence, according to a statement by the center.

The Israeli occupation has obligations under international humanitarian law, specifically Article 56 of the Fourth Geneva Convention, which states: “The Occupying Power has the duty of ensuring and maintaining, with the cooperation of national and local authorities, the medical and hospital establishments and services, public health and hygiene in the occupied territory.”